Keystone Girls Fall to Windber in Class 2A; Farrell Boys Bested by Berlin Brothersvalley in 1A 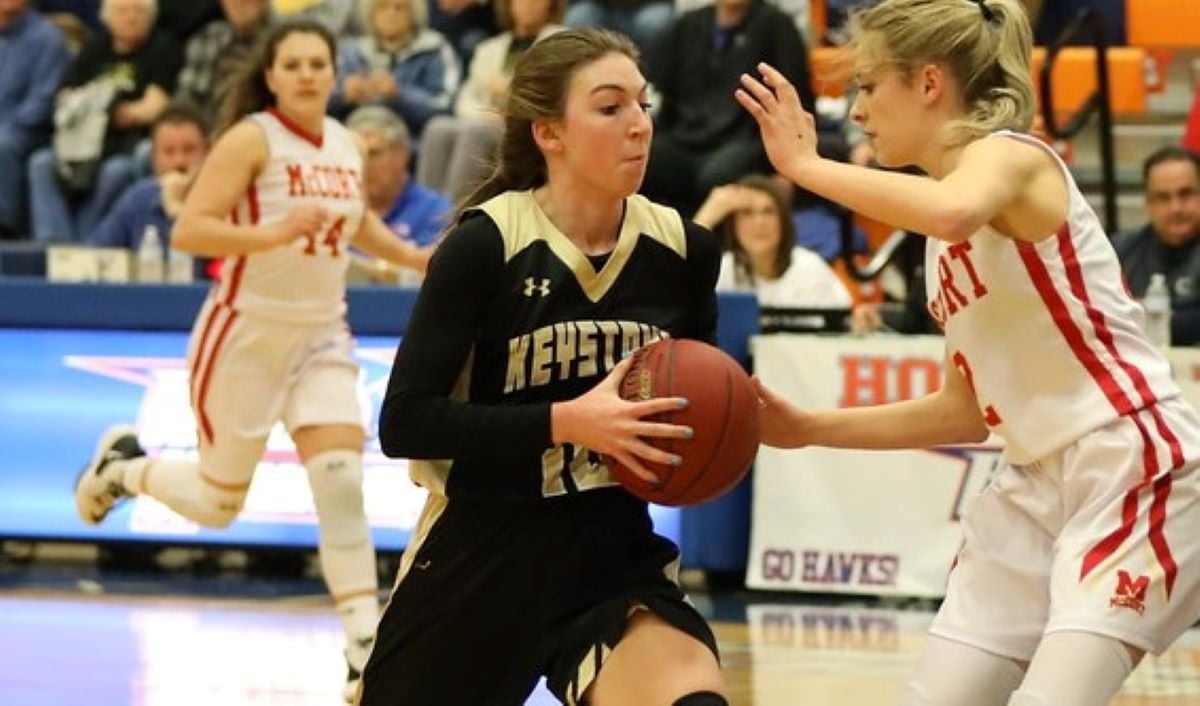 KNOX, Pa. – Too many unforced errors proved to be Keystone’s undoing in a 53-37 loss to visiting Windber in the opening round of the PIAA Class 2A girls basketball playoffs Tuesday night.

The Lady Panthers turned the ball over 20 times, many of them unforced, and scored just two points in the game’s final 6:41 after getting within seven, 42-35, on a Jozee Weaver basket at the 6:41 mark of the fourth quarter.

“There were some unusual turnovers out of us,” Keystone head coach Josh Almes said. “We just kind of did the first 90% of a play and then the last 10% we would kind of blowup. But give credit to Windber. They came out, they played hard, they were physical with us, and that definitely changed things early. That was all very uncharacteristic for our team. Our kids have taken care of business every game this year until this point. So, that’s unusual. There is nothing you can do now other than just celebrate the season and hold your heads high and know what we accomplished this season as still great.”

The 6-foot senior scored a team-high 12 points and added 17 rebounds despite having to sit out a couple of minutes in the fourth quarter with four fouls. Six of her rebounds were offensive, and Windber grabbed 17 offensive rebounds as a team.

“She’s very tall,” Almes said. “She’s very strong. She’s very athletic. It took us a while to adjust to her game.”

A big point in the game was Keystone’s inability to take advantage when Cominsky picked up her fourth foul with 7:22 to play and Windber leading by nine, 42-33.

After the Weaver basket made it a seven-point game, Keystone’s Danae Hurrelbrink had a chance to cut the deficit to five, but she missed the front end of a 1-and-1.

Keystone then turned the ball over on its next two possession, and Windber was able to get the lead to 10, 45-35, with just under four minutes to play allowing the Lady Ramblers to get Cominsky back into the game.

“That’s tough,” Almes said. “If you can’t capitalize with points, it just backs the next play even harder.”

Windber started the game strongly and led 11-4 just over three minutes into the contest, but behind two Danae Hurrelbrink 3-pointers, Keystone cut the deficit to one, 11-10, with 2:25 left in the quarter.

The Lady Ramblers, however, went on an 8-0 run that stretched into the second quarter to go up nine, 19-10, and never led by fewer than seven the rest of the way.

Gina Gaye and Rylee Ott each added 11 points for Windber, who will travel to WPIAL champion Neshannock in the quarterfinals Friday, while Samantha Toki chipped in 10 points and Kylee Ashbrook nine.

WINDBER, Pa. – Pitt-Johnstown recruit Elijah Sechler scored a game-high 21 points to lead Berlin-Brothersvalley to a 70-49 win over Farrell in the first round of the PIAA Class 1A playoffs on Tuesday.

The District 6 champion Mountaineers (25-1) got off to a slow start by their standards, picking up the pace in the second quarter, scoring 21 points to take a 33-17 lead at halftime.

They didn’t look back.

March 16 District 9 and District 10 Playoff Basketball Scores
McDowell Girls Outlast Altoona in Class 6A Subregional
This website or its third-party tools process personal data.In case of sale of your personal information, you may opt out by using the link Do not sell my personal information.
×
Manage consent