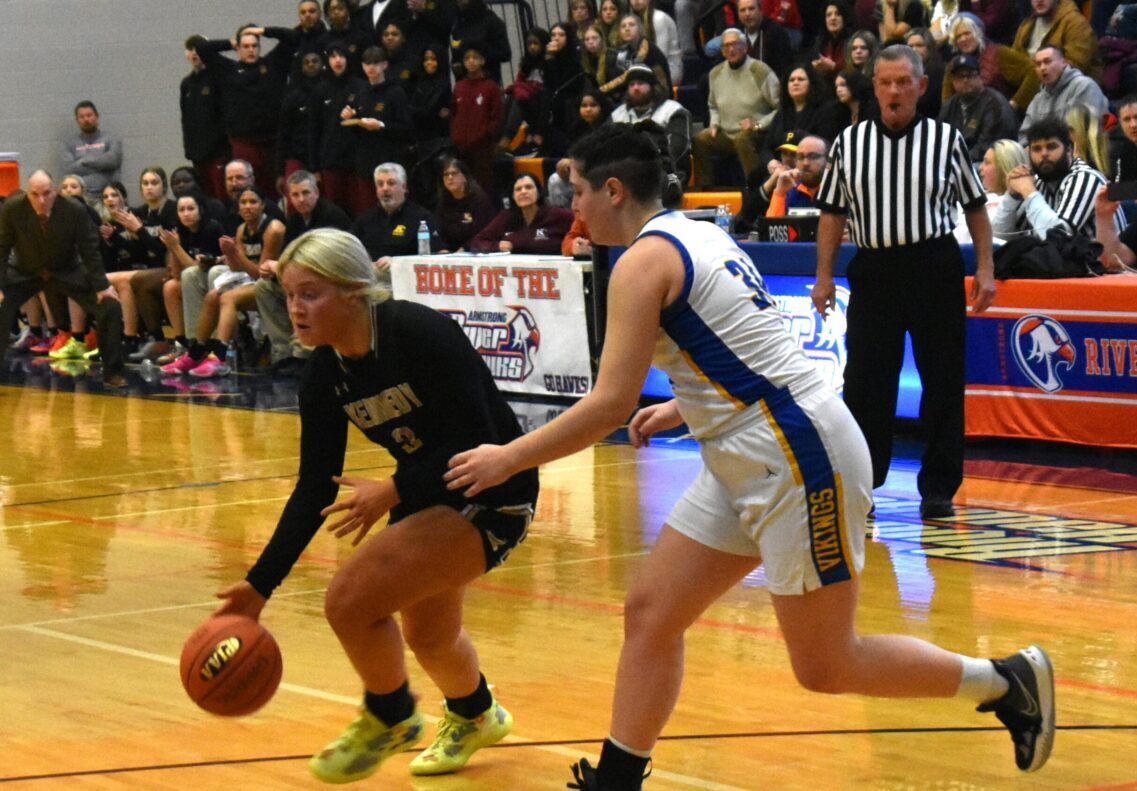 Bellah Dinardo had 20 points to help Kennedy Catholic reach the PIAA semifinals for the first time since 2005. Photo by Andy Close

CLARION, Pa. – Kennedy Catholic took out over a decade of frustration in the PIAA playoffs on Otto-Eldred Wednesday night, rolling past the District 9 runner-up Lady Terrors, 77-30, in the Class 1A quarterfinals at Clarion University’s Tippin Gym.

“It feels great,” senior Bellah Dinardo, who had a game-high 20 points, said. “We have been working hard, like really, really hard. Every since I joined the team, we have never made it past the Elite Eight. But this time, I know we are going to make it to states. You can bet on that.”

It wasn’t just Dinardo and her classmates who hadn’t gotten past the Elite Eight.

D10 champion Kennedy Catholic (24-2) made its 14th consecutive PIAA playoff appearance this season, and the win Wednesday night marked the first time the Golden Eagles have gotten past the quarterfinal round. In fact, it is the first time Kennedy Catholic has reached the semifinals in 17 years, since 2005 when it lost to Serra Catholic.

“What a great win for these girls,” Kennedy Catholic head coach Justin Magestro said. “They have worked so hard for the last year. I’m just delighted we are going to the Final Four.”

Kennedy Catholic took care of Otto-Eldred (24-4), which was coming off a come-from-behind upset win over WPIAL champion Bishop Canevin in the second round, in quick order.

The Golden Eagles scored the game’s first 17 points and then outscored the Lady Terrors 41-8 in the second half.

“They are not No. 1 in the state for no reason,” Otto-Eldred head coach Shawn Gray said. “They played well. We gave them on punch, maybe at the end of the first quarter, the beginning of the second quarter. But they just ran away from us in the second half. I couldn’t be more proud of the way my kids battled. They have a lot to be proud of this year.”

The game was really over before it started.

Freshman Layke Field grabbed an offensive rebound on Kennedy Catholic’s second possession and put it back in starting the game-opening 17-0 run that featured scoring from four different players, including seven points from Paris Gilmore.

“Paris, she gets downhill,” Magestro said. “She is so explosive.”

Kennedy Catholic’s defense played a key role in the opening sequence holding Otto-Eldred to 0-for-7 from the field to start the game while causing three turnovers before a Bri Heller 3-pointer got the Lady Terrors on the board with 55.5 seconds left in the first quarter.

“We really emphasize our defense every single day,” Dinardo said. “That is what we work on. We have the ability to score. That is not really what we focus on. Our defense get us to where we need to be.”

Otto-Eldred, as Gray mentioned, did punch back in the second quarter.

Behind six straight points from Anna Merry, the Lady Terrors cut the deficit to single digits, 22-13, with 4:40 to play in the half on an old-school 3-point play by Merry.

But Dinardo scored six points during an 8-3 run that lifted the Kennedy Catholic lead back to 14, 30-16, following two Dinardo free throws with 2:11 to play in the half.

“Bella played unbelievably,” Magestro said. “She has been getting better the last three games. I think, as a senior, she is trying to be a leader not only as a player but off the court as well. Off the court, on the court, she is just doing everything we ask her.”

That is when Kennedy Catholic answered with a 32-2 run (26-2 to end the third quarter and 6-0 to start the fourth quarter) to put the game into the PIAA 30-point Mercy Rule and a running clock.

“We all play with a lot of passion,” Dinardo, who scored 11 third-quarter points, said. “We all want to work hard to get to states. We all have the same drive to get where we want to be.”

Magestro said the thing he was perhaps happiest about was holding Otto-Eldred to eight points in the second half.

“I think the most important thing was almost until the very end we held them to seven points in the second half (the eighth point was scored with 1:48 to play),” Magestro said. “When you can defend like that, I think you are going to have a lot of luck.”

In addition to Dinardo’s 20 points, Gilmore had 13, Hayden Keith and Fields added 11 each, and Monique Vincent scored 10 off the bench.

“We are eight or nine or 10 deep,” Magestro said. “Our 10th girl, Sophia Lombardi comes in and does a great job. She would probably start for any other team around here and she is our 10th person. That says something about our team.”

Watch Fields with a putback at the end of the first half that resulted in her also making a free throw to give Kennedy Catholic the 36-22 halftime lead.

Cassie Dancak also came off the bench to give the Golden Eagles eight points, all in the fourth quarter.

“We have so many weapons on our team,” Dinardo said. “Whenever someone is down, we have anybody else who can score. We don’t really worry about scoring.”

Kennedy Catholic will face District 6 champion Portage, who beat WPIAL third-place finisher Union (New Castle), 32-27 in overtime, Saturday at a site and time to be announced.

The loss brings an end to perhaps the most successful season in Otto-Eldred history.

“We only lose two seniors,” Gray said. “We have some talented kids coming up at the junior high level. The juniors, that we have, give us a good shot next year, too. We are a family-oriented team and community. So, we’ll just keep going, keep working, and hopefully it all works out for us.”