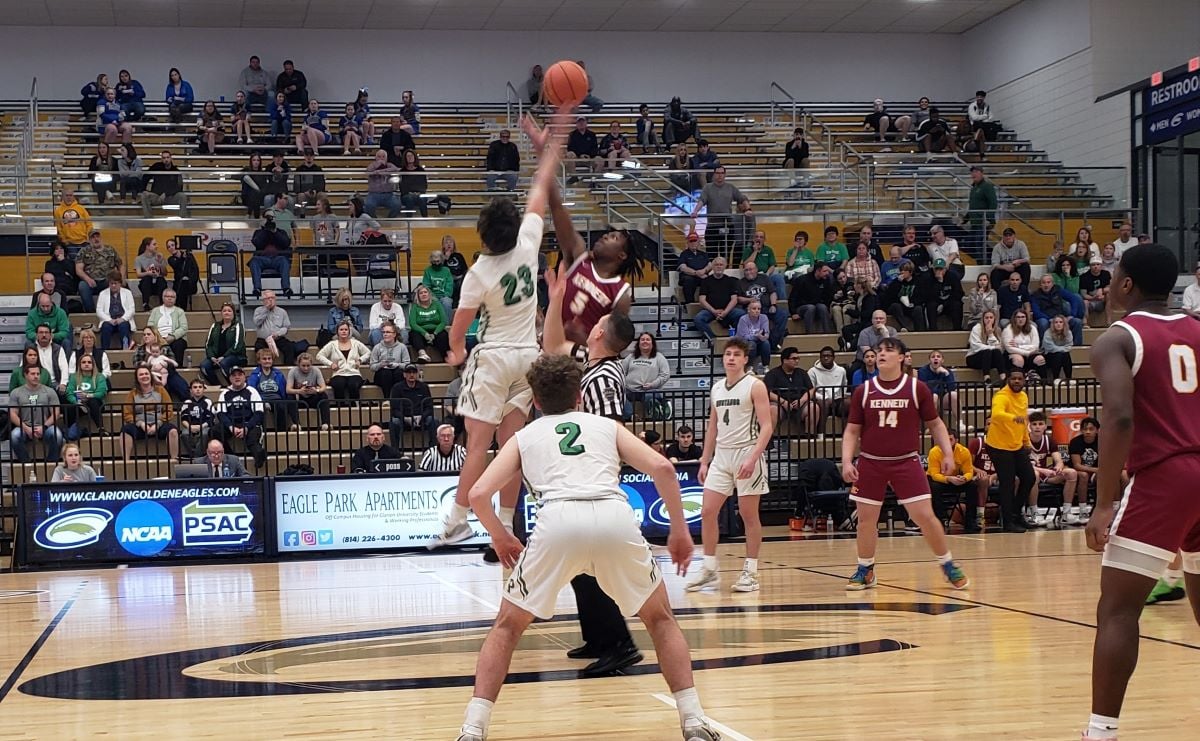 That’s the philosophy of Kennedy Catholic boys basketball head coach Ken Madison, and his Golden Eagles did just that taking the best punch District 6 champion Portage could muster but holding off the Mustangs, 64-55, in the PIAA Class 2A quarterfinals Wednesday night at Clarion University’s Tippin Gym.

“At this point in time in the playoffs, I don’t care if we win by a half a point,” Madison said. “We survive and advance.”

“It took a lot of guts, a lot of heart (to win tonight),” Madison said. “We were down at the beginning of the game. It got a little bit back and forth throughout the game.”

Watch Elijah Harden give Kennedy Catholic a 27-19 lead in the second quarter.

But despite getting the lead to as many as eight points, the latest being 33-25 early in the third quarter, the Golden Eagles could never put the game away.

And a basketball war it was.

Portage struck first with an Andrew Miko basket to get within one, 40-39, 13 seconds into the quarter.

Kennedy Catholic punched back with five straight points from Elijah Harden to push the lead back to six, 45-39, a minute into the final quarter.

Again, the Golden Eagles seemed to have the answer with Lampkins-Rudolph making three free throws and Simeir Wade one to get the advantage back to five, 49-44, following two made shots on a 1-and-1 by Lampkins-Rudolph.

But every time things seemed to trend in Kennedy Catholic’s direction, Portage had the answer,

Gio Magestro had one of those big shots when he answered with a three of his own out of a timeout to make it 53-49, but Miko again answered with a bucket at the 3:15 mark to get Portage back within two, 53-51.

But that was as close as the Mustangs got.

A bucket by Harden followed by two Lampkin-Rudolph free throws grew the lead back to six, 57-51, with 1:37 to go.

“I would like to think we stayed calm throughout the quarter and the rest of the game,” Lampkins-Rudolph said. “We just converted on what we needed to convert on.”

Kennedy Catholic then withstood some free-throw shooting issues – the Golden Eagles had a stretch where they went 3-for-8 between the 1:22 mark and the 32.9 mark – to hold off the Mustangs who saw a pair of missed threes by Mason Kargo, including one that went in and out, thwart a comeback.

Lampkins-Rudolph then hit a pair of free throws with 16.2 seconds left and scored on a breakaway with 3.3 to play to set the final score.

Lampkins-Rudolph had a monster game for Kennedy Catholic with a game-high 28 points. He scored 16 in the first half and 10 in the fourth quarter when he went 8 of 10 from the line.

“In the second half, they just came out very aggressive,” Lampkins-Rudolph said. “I just got a little in my head, but my teammates came together and we pulled off the win. That is all that matters.”

Watch Lampkins-Rudolph score in the first half

“When they are concentrating on him, me and Gio now that we have to step it up,” Harden said. “Even if he gets in foul trouble and goes out, we know we have to take it to another level.”

Miko had 27 points to pace Portage, including 12 in the fourth quarter and 19 in the second half.

“He just shows a lot of effort,” Madison said. “The kid is an undersized post player, if I want to call him that. He spends a lot of his time hovering around the baseline, and we had guys stepping up to help on drives and they pass him the ball. He went up and finished like he was supposed to. He is a tough kid.”

Kargo added 12 points for the Mustangs with Claar chipping in 11.

Kennedy Catholic will face WPIAL champion Our Lady of Sacred Heart, a 54-27 winner over District 9 champion Ridgway, in the semifinals Saturday at a site and time to be announced. OLSH has won 66 consecutive games and is the defending PIAA champion.

“It feels great,” Harden said. “We just want to keep moving on and try to get to states. We just have to keep the intensity up and play hard.”

NOTES: Kennedy Catholic is back in the semifinals for the first time since winning the PIAA Class 6A title in 2019 but are in the PIAA semifinals for the 22nd time in the 36 completed tournaments (the 2020 tournament was halted because of COVID-19). It also marks the sixth time in the last seven completed seasons the Golden Eagles have reached the semfiinals and the 23rd time sine joining the PIAA in the early 1970s … The win over Portage was a bit of revenge from last season when the Mustangs beat Kennedy Catholic, 65-57, in the quarterfinals of the District Champion-only tournament.

OIL CITY, Pa. – A terrific season for the Ridgway Elkers came to a close at the hands of defending state champion Our Lady of Sacred Heart, 54-27 in the PIAA Class 2A quarterfinals on Wednesday.

The Chargers, the four-time defending WPIAL champions and winners of 66 games in a row, went on an 18-0 run in the third quarter to break the game open.

“We just couldn’t score,” said Ridgway coach Tony Allegretto, coaching in his final game after 18 years at the helm of the Elkers’ program. “They flustered Dan (Park) and Dom (Allegretto). There’s just talent everywhere, there’s rebounding everywhere, there’s shooting everywhere. They deserve to be the best team and it’s going to be hard to beat them.”

Getting that task in the semifinals will be Kennedy Catholic, a 64-55 winner over Portage at Clarion University.

The Elkers (22-6) dictated the tempo in the first half, staying within striking distance of the Chargers (26-0).

Ridgway actually limited OLSH to its lowest first-half point total (18) and game total (54) of the season.

It was 18-9 Chargers at the half, with Aaron Sorg keeping Ridgway in the game in the first half on the offensive end. Sorg scored eight of his team-high 17 points in the first half, including a three with 1:10 to go in the half that made it a 9-point game.

“Aaron had a big day,” coach Allegretto said. “We got them into our style, we just couldn’t finish. Dom had some open looks in the first half and if we get them, maybe it’s a different story, but there was just too much pressure.”

Jake DiMichele and Rocco Spadafora had a pair of buckets each during the run, and Summers put an exclamation point on it with a thunderous dunk.

Sorg stopped the bleeding with his third three of the game, but by that point, the Chargers had built a 23-point lead.

The lead swelled to as many as 31 before an Erik Panebianco three in the fourth quarter for Ridgway.

DiMichele, who came in averaging just over 32 points per game, finished with 28, including a stretch of nine straight in the fourth quarter. Spadafora was also in double figures for the Chargers with 11.

Park added four points for Ridgway, which gave its coach a special sendoff with a run to the quarterfinals.

“I told them thank you,” coach Allegretto said. “They’ll forever be my last team. What they did this year, I thanked them for taking me on that ride. When I took over in Ridgway, my plan was I wanted to do this long-term. There have been some frustrating times and I’m sure I’ve frustrated some players, but overall, I see these guys in the stands, I hear from them, I love them. I remember all the teams. All the kids over the years and getting to coach my sons the last six years and being able to coach my sons and have them walk off the court with me…”

Villa Turns in Stellar Performance in PIAA Class 4A Quarterfinal Win Over Blackhawk
Kennedy Catholic Finally Gets Over the Hump and Back into PIAA 1A Girls Semifinals with Win Over Otto-Eldred
This website or its third-party tools process personal data.In case of sale of your personal information, you may opt out by using the link Do not sell my personal information.
×
Manage consent