Kennedy Catholic Boys/Girls, Villa Aiming to get to Hershey 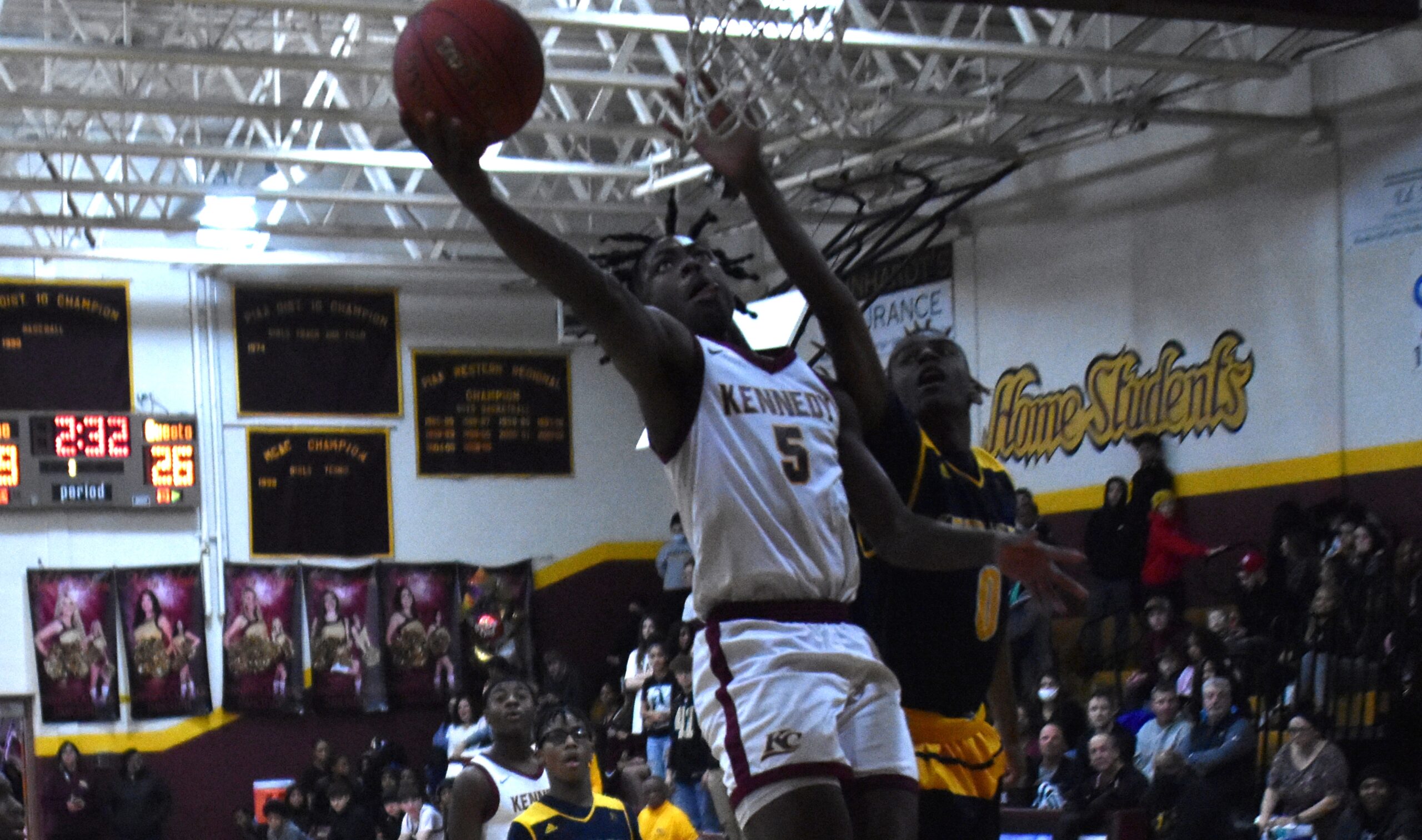 A trio of berths in the state finals are on the line for District 10 basketball teams on Saturday, as the Kennedy Catholic boys and girls, as well as Villa Maria look to punch their tickets to Hershey.

The Kennedy Catholic teams will play a doubleheader beginning at noon with the girls from Armstrong High School in Kittanning, while the Villa girls take on Lansdale Catholic at Bald Eagle High School at 1 p.m.

The Golden Eagles are back in the semifinals for the first time since 2019, a year in which they won the state championship in Class 6A.

Their task is a tall one, as they take on defending state champion Our Lady of Sacred Heart. The Chargers (26-0), the four-time defending WPIAL champions, come in winners of 66 consecutive games.

“At this point in time in the playoffs, I don’t care if we win by a half a point,” Kennedy Catholic coach Ken Madison said. “We survive and advance.”

OLSH was held to season-low points totals both in the first half and in the game of their quarterfinal win against Ridgway but still managed to put forth a dominating effort in a 54-27 win.

Jake DiMichele, the Chargers’ 6-3 senior guard, is the WPIAL’s fourth all-time leading scorer and connected for a game-high 28 points, while Rocco Spadafora added 11.

Bryson Kirschner, Kevin Wilson, and Dawson Summers (12.5 ppg.) provide the length and muscle underneath for OLSH.

Including the WPIAL playoffs, the Chargers have won each playoff game by at least 24 points, including victories over United and Carlynton in addition to Ridgway in the state playoffs.

The Golden Eagles (24-4), conversely, have grinded out wins over Redbank Valley (61-56) and Portage (64-55) after blowing by Winchester-Thurston in the first round.

They have done so thanks to the stellar play of their senior trio of Elijah Harden, Malik Lampkins-Rudolph, and Gio Magestro. The trio combines to average 50 points per game, with Harden leading the way at just over 19 per contest.

Lampkins Rudolph led the way with 28 in the quarterfinal win over Portage.

They are also led by underclassmen Simeir Wade, Remington Hart and Nick Ondo. The Golden Eagles are in the semifinal round for the sixth time in the last seven seasons (not counting the 2020 COVID year).

The winner will face the Constitution (12-1) vs. Old Forge (2-2) winner in the state championship game on Friday from the GIANT Center.

“It feels great,” Harden said after the win over Portage. “We just want to keep moving on and try to get to states. We just have to keep the intensity up and play hard.”

The Villa Maria Victors are one win away from getting back to Hershey and will look to go through Lansdale Catholic to get there.

In that game for the Victors, Jayden McBride led the way with a game-high 17 points, while Daniela Shaugnessy netted 12 and Lena Walz 10.

Carissa Dunahm, the Victors’ leading scorer on the season, scored just three points, but that speaks more to the depth of talent and team-first attitude of the team more than anything.

The defense was dominating against the Cougars, limiting them to just 12 second-half points.

“We’re really starting to come together,” Walz said. “We’re finding each other and we’re able to execute. I think this is the best basketball we’ve been playing all season. We have so much fun. The team goal is to win and we always have fun cheering each other on, hyping each other up, and just celebrating together.”

The Crusaders have also been playing their best basketball since losing to Neumann-Gorretti in the Philadelphia Catholic League playoffs.

They are led by junior forward Gabby Casey, who has already eclipsed 1,000 career points. The Division I prospect is averaging 23.2 points per game, while guard Olivia Boccell checks in at 10.3 points per game. The Crusaders are also led by Lauren Edwards and Sanyiah Littlejohn.

The winner of the game will get the Archbishop Wood (12-1) vs. Jim Thorpe (11-1) winner in the state championship game on Thursday at a site and time to be determined. Wood beat Villa in the state title game a year ago.

“I can’t believe that we’re in this position with this team,” said Villa coach Doug Chuzie. “They’ve fought through adversity and they’ve stuck together. They believe in each other and we’re back in the Final Four.”

It’s been an impressive surge to get to the state semifinals for the Kennedy Catholic (24-2) girls, as they have beat North Clarion, Shanksville-Stonycreek, and Otto-Eldred in the state playoffs by no less than 26 points in each game, including a 77-30 win over O-E in the quarterfinals.

They’ve gotten it done in a big way on the defensive end as well, with the 30 points against O-E the most they have surrendered in any of those games.

They will meet a Portage team that has beat West Greene, Berlin, and Union (New Castle) in the PIAA playoffs, with the win over Union coming in overtime, 32-27.

This is the first time the Golden Eagles are in the PIAA semifinals since 2005.

“They have worked so hard for the last year,” said KC coach Justin Magestro. “I’m just delighted we are going to the Final Four.”

Senior Bellah DiNardo led the way with 20 points in the win over Otto-Eldred, but the Golden Eagles have a number of players that provide tremendous team balance both inside and outside.

Young Layke Fields has had a tremendous season in the post, while guards Paris Gilmore, Hayden Keith and Monique Vincent provide scoring punch on the perimeter, all averaging between seven and 11 points per game.

“We have so many weapons on our team,” Dinardo said. “Whenever someone is down, we have anybody else who can score. We don’t really worry about scoring.”

This is the eighth appearance in this round in program history for Kennedy, with their last win coming in 2001, a year they went on to win the state championship.

Kennedy’s only two losses this season have come to WPIAL Class 6A champ Norwin and Class 4A semifinalist Villa.

The winner will meet the winner of the (4-1) Northumberland Christian and (6-2) Williamsburg winner in the state championship game on Thursday at 12 p.m.

“We all play with a lot of passion,” Dinardo said. “We all want to work hard to get to states. We all have the same drive to get where we want to be.”

March 19, 2022 District 9 and District 10 Basketball Schedules Powered by Hunter’s Station Golf Club
March 19, 2022 PIAA Basketball Scores (All Games) Powered by Janney Montgomery Scott in Clarion
This website or its third-party tools process personal data.In case of sale of your personal information, you may opt out by using the link Do not sell my personal information.
×
Manage consent