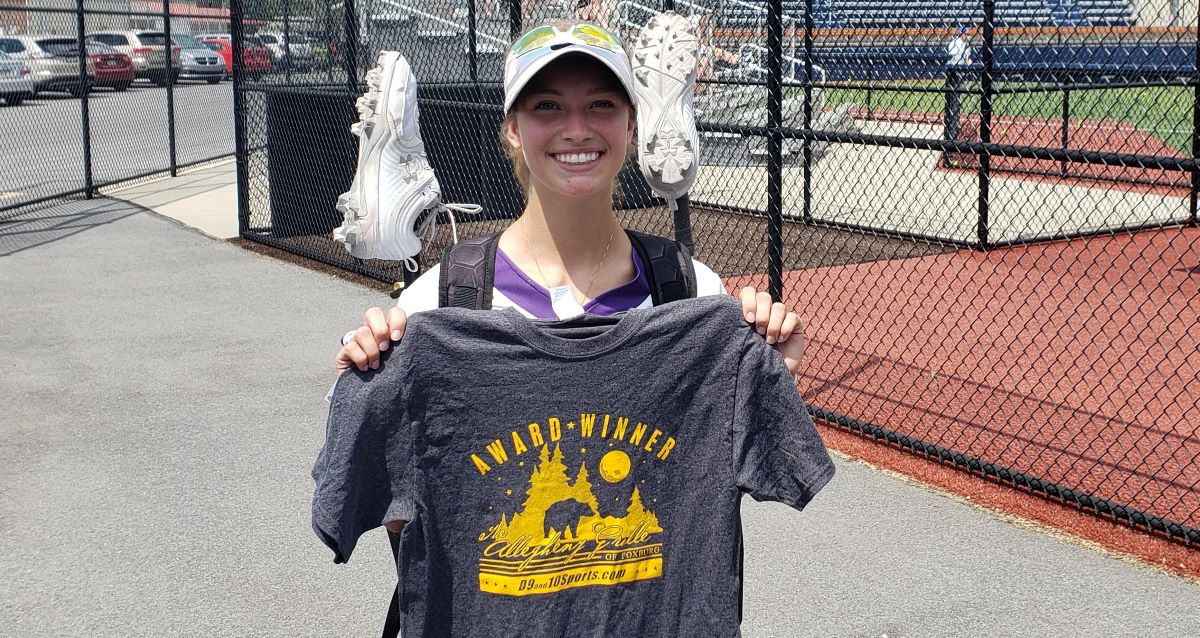 Ashley Fox was 3-for-3 with 3 runs scored in Karns City's win Monday. Photo by Chris Rossetti

DUBOIS, Pa. – Karns City had more hits with runners in scoring position in its first three batters than Harbor Creek had in the game, and that helped the Lady Gremlins to its first-ever PIAA victory, 7-2, in the opening round of the PIAA Class 3A playoffs Monday afternoon at Heindl Field in DuBois.

“This means the absolute world to us,” Ashley Fox, who was 3-for-3 with a double, a walk, and three runs scored, said. “Me and this group of girls, we have been together since we were seven or eight years old. This is actually a dream come true for us.”

Ashley Fox, Zoe King, and Rossi McMillen led off the bottom of the first with back-to-back-to-back doubles for Karns City with McMillen scoring on a Marra Patton groundout after going to third when the Harbor Creek catcher misfired on a throw back to the circle.

“In every game, you want to get ahead,” Fox said. “We are usually not a team that gets ahead, but that was really great for us. We kept that lead the whole game. It was just amazing.”

Those three early runs were enough for Patton, who pitched through raindrops all day long.

Despite allowing 11 hits, Patton gave up just two runs largely in part to Harbor Creek going 1-for-9 with runners in scoring position including 0-for-their-first-7.

“We are all proud of Marra for how amazing she has been all season,” Fox said. “She was the KSAC MVP. She has been mowing down players all year long. She just goes out there and does what she does every time.”

While the Huskies were failing to score, Karns City was adding on.

The Lady Gremlins picked up a fourth run in the fourth after two outs when Fox and King drew walks and Fox scored when McMillen reached on an error.

Karns City got another run in the fifth when Jess Dunn walked leading off and her courtesy runner Addison Christie scored on a single by Sarah Patton.

The Lady Gremlins got two more insurance runs in the sixth when Fox led off a with an infield single and went to third on a single by McMillen who took second when the throw went to third trying to get fox who had slipped rounding the bag but got back safely.

Dunn then singled to center with two outs making it 7-1.

Harbor Creek’s first run came in the second when Brooke Przbylski doubled leading off, went to third on a wild pitch, and scored on a sac fly to center by Georgia Weber just beating the throw home from McMillen,.

Down by six going to the seventh, the Huskies tried to get something going when Maura Benim singled with one out and Reagan Rand followed with a single.

After a fielder’s choice erased Benim at third, Baileigh Bleil singled home Rand to make it 7-2, but Przbyliski grounded out to end the game.

McMillen was also 2-for-3 with an RBI and two runs scored for Karns City with Dunn going 1-for-2 with two RBIs.

Marra Patton got the win going seven innings allowing two earned runs on 11 hits while striking out five. She didn’t walk a batter.

Karns City will face WPIAL champion Avonworth in the quarterfinals Thursday at a site and time to be announced. Avonworth beat Westmont Hilltop, 6-3.