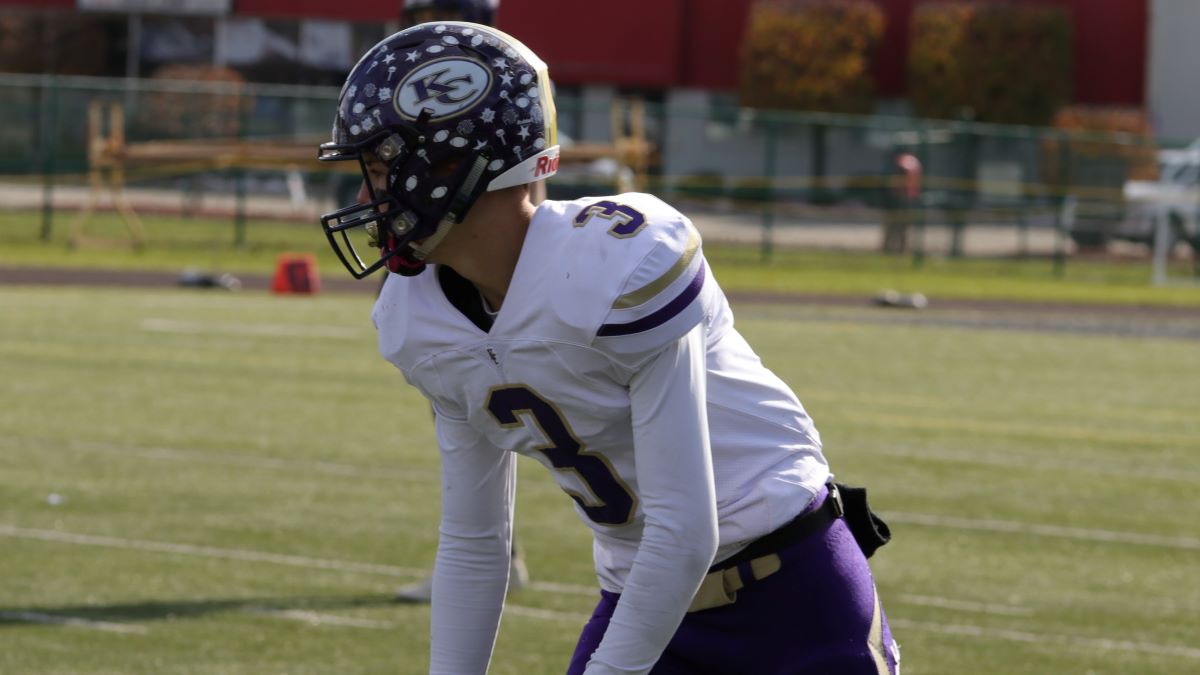 “You know, it means an awful lot,” Sherwin said. “The coaches, the players, you put in a lot of time. It’s nice to be rewarded. I’ve been coaching for Karns City football for a long time, and that is always our goal to get to the game and win a District 9 championship. That’s our goal, and we will never go away from that.”

Four of Karns City’s five touchdowns came on the ground, including three short scoring runs by Luke Garing, who led Karns City with 128 yards on 21 carries and scored on a 1-yard run and a pair of 2-yard runs.

The Gremlins especially had success attacking the left side of the Wildcats defense line running behind an experienced group of lineman on the right side of the Karns City line.

Yeah, I told our offensive before the game started that it was up to them,” Sherwin said. “They made some nice holes for us, and Luke Garing our hammer, and he just kept running people over.”

It was Karns City’s ground game that put the game away on a drive in which the Gremlins actually didn’t come away with any points.

Up 20-3 after getting an early second-half touchdown run from Garing, Karns City took over on its own 30-yard line with 8:16 to play in the quarter and ended up running 15 plays and taking off 8:02 off the clock before missing a field goal.

Thirteen of the 14 plays from scrimmage during the drive, which ended at the 4-yard line.

“I think that took a little momentum out of their sails,” Sherwin said. “When you do that, we had the momentum. I would have liked to get some points there, but when you take time off the clock and keep it out of their hands, it’s always a benefit.”

While Karns City didn’t score on that drive, the Gremlins defense got the ball right back on Clarion’s first play after the missed field goal when Kaden Scherer intercepted a Cal German pass and returned it to the Central Clarion 25-yard line and quickly turned that into a 3-yard Cole Coon touchdown run to make it 27-3 with just over 10 minutes left in the game.

It was Scherer’s third interception of the game.

“We had to keep our eyet on the receivers,” Scherer said. “He has all the time in the world, and he is a good quarterback but you’ve got to shut down the pass and keep your eyes on the receivers.”

Karns City did a fairly good job of keeping their eyes on Clarion’s receivers.

While German threw for 250 yards, he only completed 20 of his 40 passes with the three picks and just one touchdown.

That touchdown came after the third Schrerer pick and was a 50-yard hookup down the seam to Hunter Craddock that seemed to give the Wildcats some life as it got them back into the game at 27-9.

And on the ensuing kickoff, things seemed to even turn more in Central Clarion’s favor when the Wildcats recovered an on-side kick at the Karns City 47-yard line with about 9:40 to play.

But an 18-yard penalty on Central Clarion on a third-down passing play that would have brought a first down was too much for the Wildcats to overcome, and Karns City stopped a fourth-and-3 play to take away any momentum gained by the Craddock touchdown and the onside kick recovery.

“We seemed flat tonight,” Central Clarion head coach Larry Wiser said. “I don’t know how to describe it, just not getting the emotions back into it at times. We just made way too many mistakes to beat a team like this.”

But even that lead seemed a bit hallow considering Clarion had seemingly moved the ball at will in the quarter only to end up with just the three points.

On the Wildcats’ first drive, they move the ball from their own 20 to the Karns City 32 before Scherer picked off a German pass giving the Gremlins the ball at the KC 20.

Then, after Karns City went three-and-out, Central Clarion took over at its 44-yard line and proceeded to move to the Karns City 4-yard line before settling for the short field goal.

The lead lasted all of six plays, as Eric Booher hit Gage Cowowski with a 48-yard yard strike down the far sideline to put Karns City ahead 7-3 late in the first quarter.

Central Clarion’s offense again set up moving the ball to the Karns City 14-yard line. But again the drive stalled, and Verdill initially came out to try what would have been a 31-yard field goal to pull the Wildcats within a point.

But after a timeout, Wiser decided to go for it and that blew up on a double reverse on a fourth-and-10 play from the 16-yard line that saw the exchange go awry and the Gremlins fall on the loose ball at the 25-yard line.

That is when Karns CIty’s rushing attack took over gaining 49 yards on the first three runs, all over the right side, before eventually ending the drive with a 1-yard Garing scoring run to make it 14-3 with 4:05 left in the half.

Karns City added to its lead on the first drive of the second half needing six plays to go 57 yards scoring on Garing’s second touchdown run of the game to make it 20-3. Garing had the big runs on the drive, a 24-yard bulldozer to the Central Clarion 20 yards line followed by a 13-yard run to the seven before scoring two plays later from the two.

The Gremlins will meet Brookville in the District 9 Class 2A title game at 7 p.m. Friday at Varischetti Field in Brockway. The Raiders beat Ridgway, 49-15, in the other semifinal. Brookville defeated Karns City, 44-0, Sept. 25 in Brookville.

Oil City Rolls Past Conneaut, Into D-10 Class 4A Championship Game
Brookville Secures First Playoff Win in a Decade will Play for D9 2A Title
This website or its third-party tools process personal data.In case of sale of your personal information, you may opt out by using the link Do not sell my personal information.
×
Manage consent