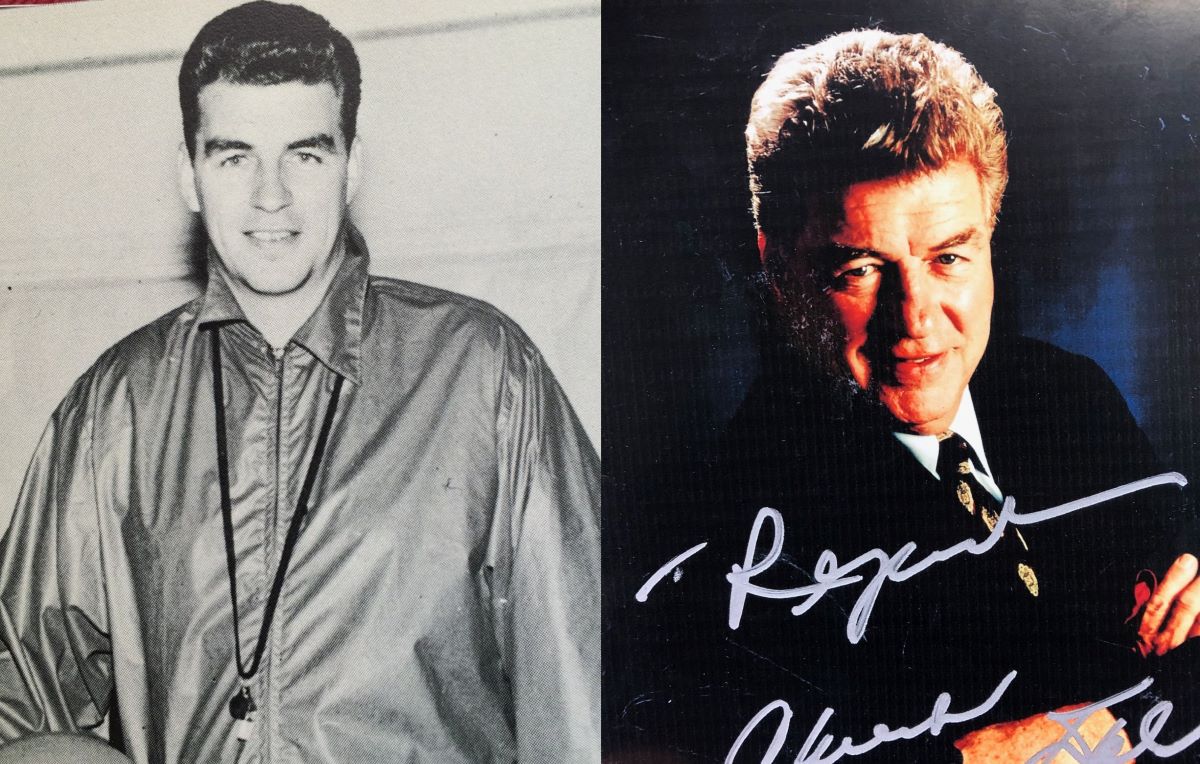 The signed photo of Chuck Daly on the left is courtesy of the Chuck Daly Foundation, while the young Daly photo on the right is from the Punxsutawney yearbook when Daly was coaching at the school.

MIES, SWITZERLAND – Kane graduate and former Punxsutawney boys’ basketball coach Chuck Daly, who was the coach of the gold medal USA Dream Team at the Barcelona Olympics in 1992, was recently inducted into the FIBA Hall of Fame.

The indication was done via an online ceremony that was filmed on June 2 and released on June 18, 2021, on the 89th anniversary of the founding of FIBA, the International Basketball Federation. The FIBA Hall of Fame is located at the Patrick Baumann House of Basketball in Mies, Switzerland.

Each inductee or a representative of each gave a brief acceptance speech. Daly’s was done by his daughter, Cydney.

In addition to leading the Dream Team to the gold medal, Daly also coached the Detroit Pistons to back-to-back NBA titles in 1989 and 1990. He was the coach of the Pistons from 1983 to 1992. In addition to the two NBA titles, Daly also led Detroit to the Eastern Conference championship in 1988.

Daly moved into the college ranks following the 1963 season becoming an assistant coach at Duke under Vic Bubas before taking the Boston College head job.

A 1994 inductee into the James Naismith National Basketball Hall of Fame, Daly’s name lives on in the NBA with the league honoring his coaching legacy with the Chuck Daly Lifetime Achievement Award given annually to a longtime NBA coach’s life in basketball and his “standard of integrity, competitive excellence and tireless promotion” of the game.

A 1952 graduate of Bloomsburg State College (now Bloomsburg University), Daly played basketball for the Huskies for two years and averaged 13.5 ppg in the 1951-52 season. He was inducted into the Bloomsburg in 1983.

Daly is also a Warren County Hall of Fame inductee.

Read more about Daly on his FIBA Hall of Fame page

Find out more on the FIBA Hall of Fame here

Franklin Grad YaSenka Named High-A Central Pitcher of the Week
A H(e)ART for Baseball: Cameron Co. Native Joe Hart Excels as President of the South Bend Cubs
This website or its third-party tools process personal data.In case of sale of your personal information, you may opt out by using the link Do not sell my personal information.
×
Manage consent