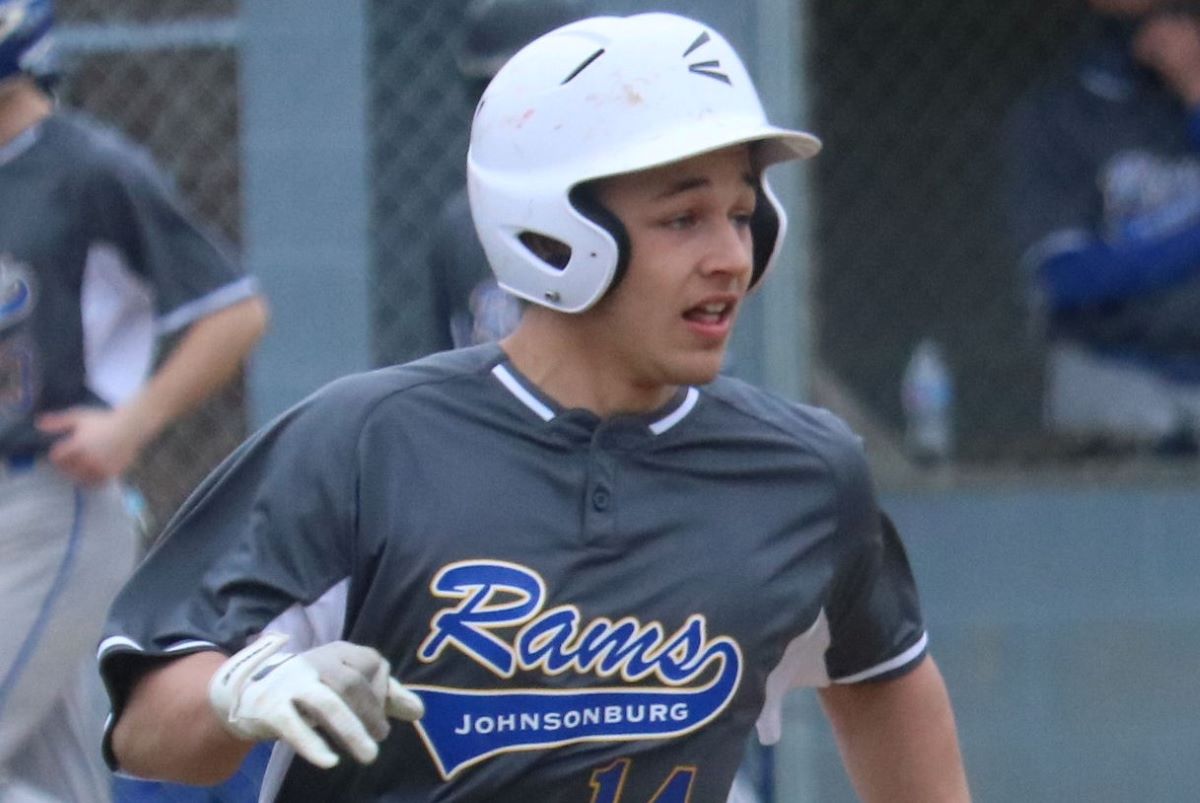 Carmichaels had just taken a 2-1 lead in the top of the third on a Drake Long double and a Gavin Pratt groundout.

But Pratt, the Might Mikes starter walked the bases loaded to start the bottom of the inning before being replaced by Dylan Rohrer.

Marciniak welcomed Rohrer with line drive single to left giving the Rams the lead back, this time for good, 3-2.

Three batters later, Dennis made it 5-2 with a base hit to right.

Johnsonburg added to its lead with a pair of runs in the fifth thanks to a Luke Zimmerman double and a wild pitch.

Long was 1-for-4 with a double and an RBI for Carmichaels. Rohrer and Zach Hillsman both went 1-for-3 with a run scored.

Johnsonburg will take on WPIAL champion Shenango, a 7-3 winner over Mt. Union, in the PIAA quarterfinals Thursday, June 10, at a site and time to be announced.

DUBOIS, Pa. – A one-out single to right against a drawn-up infield by Eli Szenyeri in the top of the seventh helped WPIAL third-place finisher Eden Christian complete a comeback from an early four-run deficit and get an 8-7 win over District 9 champion DuBois Central Catholic in the opening round of the PIAA Class 1A baseball playoffs at Showers Field in DuBois Monday.

Roberto Farfan tripled to right a batter earlier to set up the go-ahead run situation for the Warriors, who trailed 7-3 after three.

DCC put the tying run at second and the winning run at first with one out in the bottom of the seventh only to see its hopes dashed when Christian Cropper retired the final two batters to secure the win.

Cropper was a big reason Eden Christian got the victory.

Eden, meanwhile, started its comeback with a run in the fourth on a one-out Brian Feldman double before tying the game with three runs in the fifth.

Andrew Prouty led off the fifth with a home run to right before Malachi Manges tied the game with a two-run blast to left. Both of those homers came off Kaden Brezenski, the hero of the District 9 playoffs.

Brezenski relieved Carter Hickman after Hickman failed to record an out in the fourth and took the loss going 3 ⅓ innings allowing four earned runs on five hits while striking out two.

Hickman pitched three-plus innings giving up four earned runs on four hits and four walks while striking out two. Carter Kosko pitched ⅔ of an inning allowing a hit and a walk.

The Cardinals didn’t have the services of No. 1 starter Brandin Anderson, who was hurt in last week’s District 9 title game. Anderson was able to bat but couldn’t pitch.

DCC grabbed a 2-0 lead in the first inning on a two-run single by Damon Foster before making it 4-0 after two thanks to run-scoring singles by Matt Pyne and Hickman.

After Eden answered with three runs in the top of the third thanks to a double by Luke Vitrone and singles from Farfan and Szenyeri, DCC had the answer with a three-run bottom of the inning.

The Cardinals had no trouble at all with McNelis, the Warriors’ ace who came into the game with a 3-0 record and a 1.12 ERA battering him around for seven earned runs – one more than he had allowed all season – on 10 hits, a walk, and a hit batter. He struck out five.

Eden Christian will face District 10 champion Kennedy Catholic, a 6-1 winner over WPIAL runner-up Riverview, in the quarterfinals Thursday, June 10, at a site and time to be announced.

NEW CASTLE, Pa. – Jake Vitale beat the rap at home plate on a grounder by Mark Stanley in the bottom of the eighth inning, and WPIAL champion Union (New Castle) survived a scare from District 9 runner-up Elk County Catholic, 3-2, in the opening round of the PIAA Class 1A baseball playoffs at Neshannock High School.

Nick Vitale followed with a single to right that sent Jake Vitale to third, and Nick Vitale went to second on defensive indifference before Stanley’s 0-2 grounder to short got home the winning run.

In a game that was at one point delayed by weather, ECC grabbed a 2-1 lead in the top of the sixth on a Joe Tettis one-out double that scored Jordan DePrator, who grounded into a fielder’s choice after Luke Ginther started the inning with a double.

Mark Kraus followed the Tettis double with a walk, but the Crusaders couldn’t add on as Isaac Dellequila and Joey Geci both struck out.

That failure to add on proved costly when the Scotties tied the game in the bottom of the sixth when Slay walked Rocco Galmarni, the first batter he faced, with the bases loaded.

Tettis, a surprise starter to some, had walked two and given up a single to load the bases with two outs.

Both teams then went down in order in the seventh before ECC was retired 1-2-3 in the eighth as well.

There were only 10 hits in the game – five by each team – and Tettis’ double was the only extra-base hit.

Tettis went 2-for-3 with a walk and an RBI, and was the only batter on either team with more than one hit.

Union (New Castle) will face District 5 champion Southern Fulton, a 12-2, 6-inning winner over Moshannon Valley, in the quarterfinals Thursday, June 10, at a site and time to be announced.

DUBOIS, Pa. – A four-run first inning proved to be too much to overcome as District 9 champion Clearfield fell to WPIAL runner-up Montour, 6-1 in the PIAA Class 4A first round at Showers Field in DuBois Monday night.

The Spartans started the game off swinging with five hits in the first inning getting doubles from Gannon Kadlecik and Matt Luchovick and singles from Nick Walker, Mason Sike and Ryan Gallagher.

“We were headed for a 10-0, five inning game,” Clearfield head coach Sid Lansberry said. “Take away the first inning, I think Hunter (Dixon) pitched a good game against a really good hitting team.”

While giving up five hits in the first inning, Dixon only allowed five more hits through the next five innings.

Walker led the Spartans going 2-for-2 with two runs scored. Luchovick was 2-for-4 with a game-high three RBIs and Sike went 2-for-4 with a run scored and an RBI.

Blake Prestash got the first hit for the Bison in the second inning with a single to left field and gave Clearfield two runners on base (Matt Bailor was hit by a pitch prior to the Prestash single).

Clearfield was unable to capitalize as Cole Bloom was thrown out on a dropped third strike to end the inning.

Luchovick doubled to drive in Walker to help increase the Spartans lead to 5-0 in the top of the fifth.

The Bison responded in the bottom of the fifth and got on the board with a Prestash run on a Morgen Billiote ground out at first.

However, a Karson Rumsky line out and Nick Domico ground out gave the Bison their remaining two outs and left three on base and the Bison trailed 5-1.

The bottom of the sixth saw Clearfield in the same situation with the bases loaded but Sike was able to strike out Billotte and the Bison retired the inning with three on.

Montour earned their final run in the top of the seventh as Luchovick grounded out allowing Brock Janeda to score to increase the lead to 6-1.

Clearfield’s last attempt at a comeback had Nolan Barr grounding out and Sike striking out Rumsky and Domico to end the game.

Prestash led the Bison offense going 2-for-3 with a run scored. Billotte had the lone RBI with Dixon and Bailor each going 1-for-3.

Kadlecik picked up the win for Montour allowing one run on three hits and striking out eight in five innings on the mound.

Hunter Dixon took the loss for Clearfield allowing six runs on 10 hits while striking out seven and walking one in six innings.

Montour will take on District 10 champion Cathedral Prep, a 2-0 winner over Blackhawk, in the PIAA quarterfinals Thursday, June 10, at a site and time to be announced.

Jared Bakaysa contributed to this report

June 7, 2021 PIAA SB: Punxsutawney Ties Game in 7th, Wins in 10th; DCC Offense Leads the Way; Clearfield Falls Powered by North Washington Rodeo
PIAA Releases Sites, Times for PIAA Softball Quarterfinals
This website or its third-party tools process personal data.In case of sale of your personal information, you may opt out by using the link Do not sell my personal information.
×
Manage consent