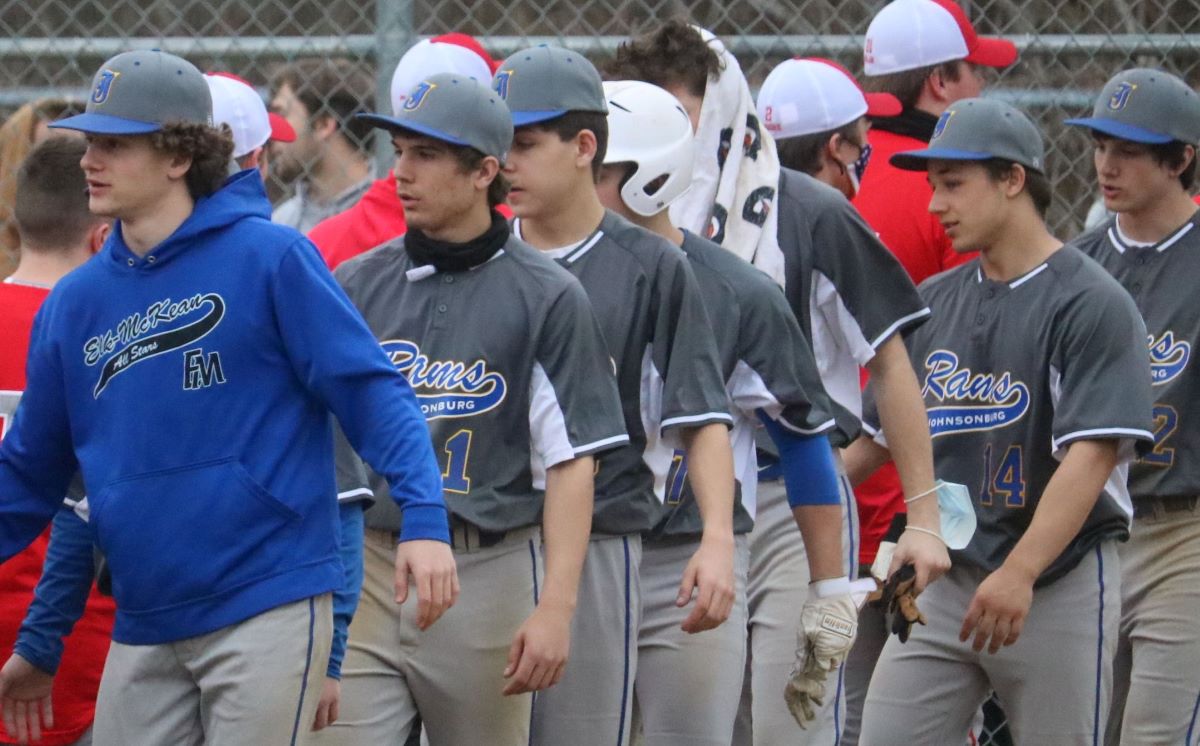 SHENANGO 2, JOHNSONBURG 1, 8 INNINGS
HOMER CITY, Pa. – A great defensive play helped send the game to extra innings, but it was a miscue in the field in the eighth that cost Johnsonburg in a 2-1 loss to Shenango in their PIAA Class 2A baseball quarterfinal Thursday.

With two outs, a runner on second and the score tied at 1-1 in the top of the seventh, Shenango’s Tyler Kamerer launched a ball toward the left field wall. Johnsonburg’s Luke Zimmerman raced to the wall and made a leaping catch to rob Kamerer of what would have been his second home run of the game.

Ethan Bintrim was on second with two outs in the eighth when Gabe Yanssens stepped in. Yanssens hit what looked to be a “routine” grounder to short. The throw went high and wide and Bintrim was able to score what would turn out to be the winning run on the play.

The error was one of four on the day for the Rams.

Ethan Wells’ RBI in the third scored Aiden Zimmerman and gave Johnsonburg a 1-0 lead. The Rams looked poised to add to the lead in the fourth when they put runners on second and third with just one out, but Zach Herb-who had come on in relief of Braeden D’Angelo-was able to induce back-to-back popups to end the threat. Herb also worked his way out of issuing a pair of walks in the bottom of the seventh to send the game to extras.

Kamerer tied the game with a solo homer in the fifth.

Luke Zimmerman got the start for Johnsonburg and went six strong innings. He allowed one run on two hits and a walk with four strikeouts. Aiden Zimmerman pitched the final two innings, giving up one unearned run on two hits.

Wells and Aiden Zimmerman had four of the Rams’ eight hits in the game.

CENTRAL 9, HICKORY 4
DUBOIS, Pa. – Central put up runs in three of the first four innings en route to a 9-4 win over Hickory in their PIAA Class 3A baseball quarterfinal Thursday.

The Dragons scored three runs in the first, another in the third and two more in the fourth to build a 6-0 lead. A 4-run fifth by the Hornets cut the deficit to 6-4, but Central responded with three in the sixth to come away with the 5-run margin.

Central got things started with a bang when Hunter Klotz launched a solo home run over the wall in center with one out in the first. With two away, Hunter Smith doubled and Jonah Snowberger was hit by a pitch. Jeff Hoenstine brought both runners in with a single and the Dragons had a 3-0 lead.

Smith hit a solo homer with two outs in the third to make it 4-0. An errant throw with the bases loaded in the fourth brought in Hoenstine and Klotz’s RBI single later in the inning pushed the lead to 6-0.

Hickory responded in the fifth. Matt Jordan drew a 1-out walk and back-to-back singles by Connor Evans and Luca Bertolasio brought Jordan across for the Hornets’ first run. With two outs and the bases loaded, Johnny Leedham ripped a double into center to clear the bases and cut the lead to 6-4.

The Dragons got almost all those runs back with two outs in the sixth. Griffen Snowberger was hit by a pitch, then came home on Paxton Kling’s double. Klotz reached on an error. Kling scored on a wild pitch, then Dalton Metzger-running for Klotz-came in on Devon Boyles’ single.

Joey Fazzone had three hits, Leedham had three RBI and Evans had a pair of hits. Evans went six innings. He allowed nine runs, seven earned, on nine hits with a walk and three strikeouts.

Mathiesen allowed just three hits and issued three walks over 5 1/3 innings with 11 strikeouts to get the win. Sike struck out all four of the batters he faced in relief. Luchovick was 2-3 with a pair of doubles and three RBI. Nick Walker also drove in a pair.

Luchovick hit his first double in the bottom of the first inning. After Walker and Gannon Kadlecik drew consecutive 1-out walks, Luchovick brought both runners home with a double to left to give Montour a 2-0 lead.

With Walker on third and Kadlecik on first in the third, Luchovick again doubled to left to bring Walker in for a 3-0 advantage.

Montour tacked on another run in the fourth when Walker hit a sac fly with the bases loaded. Walker’s ground out in the sixth brought in Maddox Tarquinio for the final run of the game.

Two of Cathedral Prep’s three hits in the game went for extra bases as Cole Constable and Jake Cooper each doubled.

The Ramblers pitching staff was uncharacteristically wild as they issued seven walks. Jack Malec allowed three runs on three hits with four walks and two strikeouts in 2 1/3 innings. Maddox Stadler gave up a run on a hit and two walks in 1 2/3 innings, and Andrew Malec allowed a run on two hits and a walk in two innings.

Montour will take on New Castle in the semifinals on Monday.

SLIPPERY ROCK, Pa. – Kennedy Catholic’s Cinderella run through the postseason came to an end with a 12-5 loss to Eden Christian in the PIAA Class 1A quarterfinals on Thursday at Slippery Rock University.

The Golden Eagles got in trouble early, as the Warriors struck for eight runs in the bottom of the first inning.

They never looked back.

Remi Hart started the game on the mound for the Golden Eagles, and was lifted after giving up six runs. Stargell Fuhr came on in relief to pitch five innings, allowing four earned runs and striking out six.

Jacob Fisher got the win, allowing three runs (one earned) in four innings.

Tino Multari put the finishing touches on his fantastic postseason for Kennedy Catholic, finishing 2-for-3 with an RBI. Hart also had a pair of hits and Sean Kirkland drove in a run.

With the win, Eden advances to take on Southern Fulton, a 7-4 winner over Union-New Castle, in the semifinals on Monday.