Johnsonburg Out of D9 VB Playoffs Because of COVID-19; Issues at Ridgway Could Impact Brookville Football 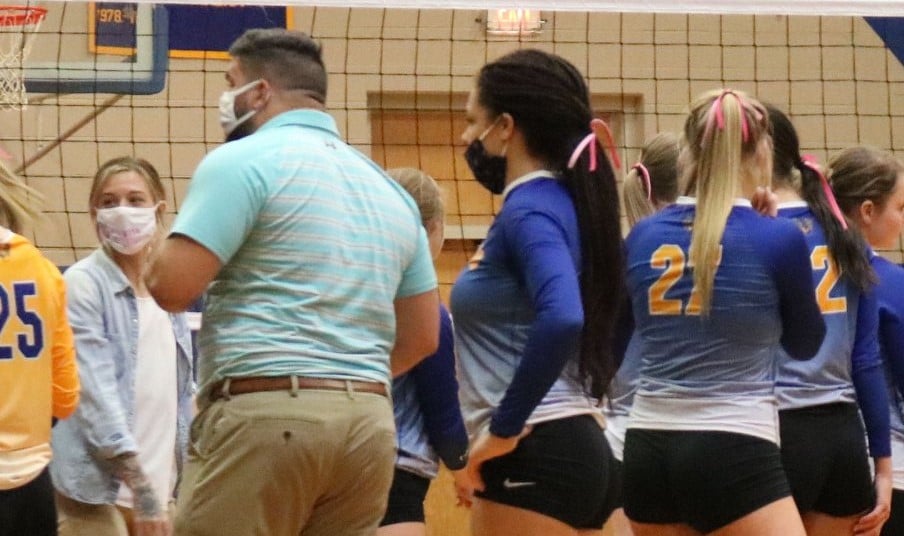 RIDGWAY, Pa. -Johnsonburg has been forced to withdrawl from the District 9 volleyball playoffs because of COVID-19, and a COVID-19 isssue at Ridgway could impact the Brookville football team.

Johnsonburg has withdrawn from the District 9 volleyball playoffs because of a COVID-19 situation at the school that has required some of the volleyball team to quarantine as well as the school to go to all-remote learning between Oct. 28 and Nov. 3. The Ramettes were the fourth seed and slated to host Oswayo Valley Tuesday, Nov. 3. Oswayo Valley will now receive a bye into the semifinals.

Elk County Catholic, also, has decided to shutdown all “non-essential” activities for the remainder of this week. That does not include ECC athletic teams who are participating in District 9 or PIAA competitions. Elk County Catholic, Ridgway, and Johnsonburg are all located in Elk Coutny, which, as of noon Tuesday, Oct. 27, had 129 confirmed COVID-19 cases and 31 “probable” COVID-19 cases. Those numbers are up from 91 confirmed cases and 25 “probable” cases since Oct. 20.

JOHNSONBURG VOLLEYBALL OUT OF PLAYOFFS

Johnsonburg first reported on Monday evening, Oct. 26, that it had been notified that “another” student at Johnsonburg Area School District had tested positive for COVID-19 making two confirmed cases at Johnsonburg High School.

“Both confirmed cases are at the high school,” a letter posted to the district’s Facebook page by Superintendent Dennis Crotzer Oct. 26 said. “We also have approximately 50 students at the high school that are currently quarantied.”

Crotzer said because of that, high schoolstudents would be receiving virtual instruction from Oct. 28 through Nov. 3.

“Fall sports, which we host, are now canceled,” Crotzer wrote.
By host, Crotzer was meaning sports in which Johnsonburg served as the sponsor of co-op sports with Ridgway as well as any sport that Johnsonburg sponsors on its own.
Athletic Director Emily MItchell confirmed to D9and10Sports.com Tuesday, Oct. 27, that includes the volleyball team.
“Due to cases within the last week, we have sent home multple students,” Mitchell said. “Among the students who were around the positive cases were volleyball players. We don’t want to endanger anyone else, our own students or other schools. We are not playing in the playoffs. It is just not safe.”
On Tuesday, Oct. 27, morning, District 9 volleyball chairman Aaron Straub said he was still awaiting official word from Johnsonburg concerning volleyball.
“In talking with their Principal yesterday evening, he was going to send an official correspondence,” Straub said in an e-mail. “In the event that teams drop out of the tournament, their opponent will be advanced to the next round.”
RIDGWAY SITUATION COULD IMPACT BROOKVILLE FOOTBALL

Ridgway reported Tuesday afternoon, Oct. 27, that it has been informed by the Pennsylvania Department of Health that a high school student, who is a football player, tested positive for COVID-19 late Monday, Oct. 26.

Because of the Elkers’ game with Brookville Oct. 23, it is possible that some (or all) of the players who came into contact with the infected player during that game could be ordered to quarantine by the Department of Health.

“PA DOH (Pennsylvania Department of Health) advised the District to contact trace from October 17, 2020, forward as the student reported on (Oct. 26, 2020) that symptoms began on (Oct. 19, 2020),” a statement on the Ridgway School District’s Facebook page said. “Based upon the PA DOH recommendations for ‘close contacts’ of positive COVID 19 cases, RASD (Ridgway Area School District) has quarantined the Elker Football Team (grades 9-12); notified JASD (Johnsonburg Area School District, who co-ops with Ridgway), who quarantined their students who play on the football team; the football coaching staff; and students in close contact with the positive case during the school day during that time period. In addition, RASD notified the Brookville Area School District administration.”

Brookville athletic director Dave Osborne said Brookville School District will be using Pennsylvania Department of Health guidelines to detemined if any of its football players will qualify as a close contact.

“We are closely reviewing game tape to help make that determination,” Osborne said.

The Department of Health has taken a varied approach in the last couple of weeks on how teams that played teams that have either been exposed to COVID-19 or have had positive COVID-19 cases have been handled.

On Oct. 15, Redbank Valley was informed that a football player at Keystone tested positive for COVID-19. Redbank Valley played at Keystone Oct. 9. The Department of Health then made 18 Redbank Valley football players – mainly lineman who had played in the game and come in close contact with the Keystone player – to quarantine through Oct. 23. That forced the Bulldogs to play their District 9 semifinal game against Coudersport on Oct. 24 rather than Oct. 23 so that the 18 players – who did not practice the entire week – could participate. Redbank Valley won the game. Other Redbank Valley players, who played in the game but were not considered to be in close contact for 15 minutes with the Keystone player, did not have to quarantine under the Department of Health guidelines.

ECC announced Tuesday afternoon that it was limiting all activities in its high school/middle school to “essential” acivities only.

“Essential” activities will include practices for sports teams that are participating in district or state competitions,” the school’s media release said.  “All other athletic practices, after school band practices, open gyms, and all clubs/activities/meetings, will be suspended for the remainder of the week. The weightroom will also be closed for the remainder of the week to non-playoff teams.

“Decisions on resuming nonessential activities will be made on a week by week basis and will be relayed to coaches and staff at the start of each week. Additionally, the volleyball game vs. Ridgway Area scheduled for tonight has been cancelled as well as our remaining two football games.”