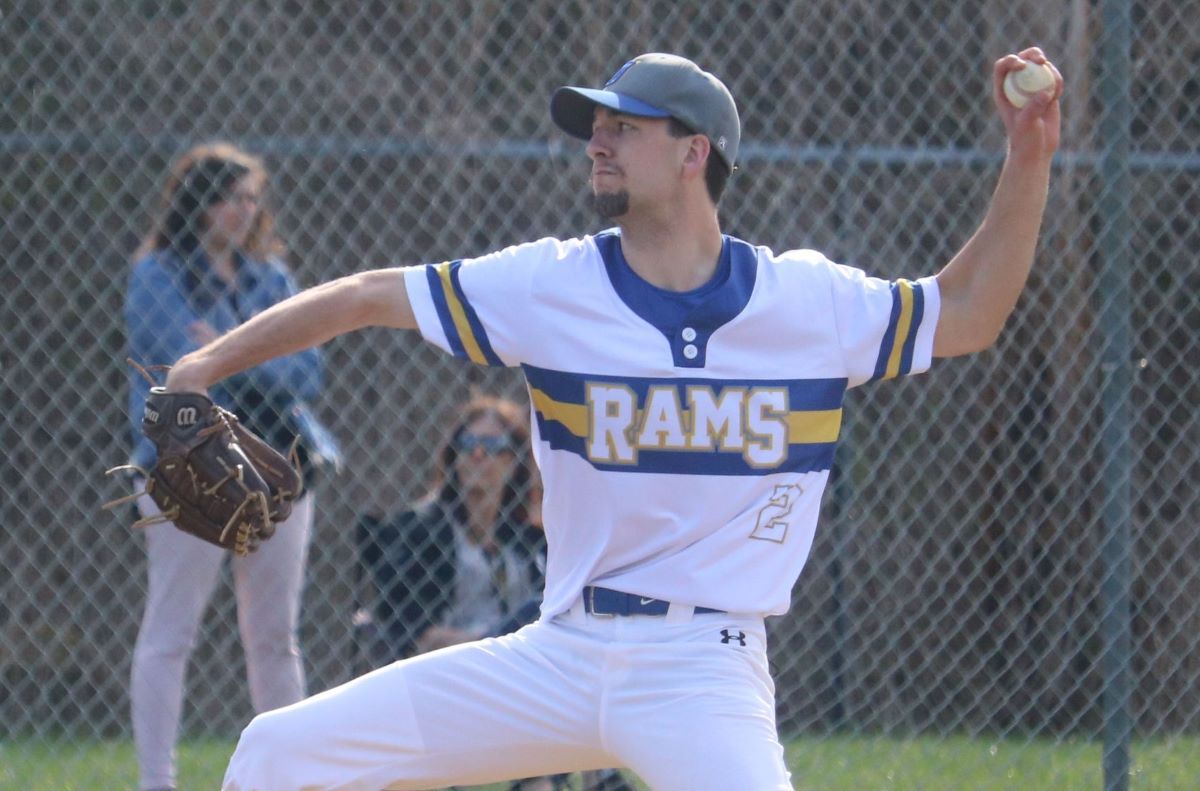 Gabe Watts tossed a shutout to lead Johnsonburg into the D9 2A title game. Photo by Bob Parana

PUNXSUTAWNEY, Pa. – Gabe Watts threw a three-hit shutout and Camron Marciniak drove in three runs to help top-seeded Johnsonburg advance to the District 9 Class 2A title game with a 10-0, five-inning win over fourth-seeded Moniteau in the semifinals Thursday at Punxsutawney.

Camron Marciniak, meanwhile, was 1-for-2 with a triple, a walk, and two runs scored.

The Rams wasted little time getting to Moniteau starter and loser Branson Carson scoring twice in the first thanks to a couple of errors and four more times in the second thanks to some two-out lightning.

In the first, Aiden Zimmerman started the inning by being hit by a pitch. He then stole second and went to third on an error by second baseman Brock Matthews before scoring on a single by Dom Allegretto.

A second error by Matthews followed by an error by centerfielder Mason Mershimer on a ball hit by Marciniak scored a second run.

Then in the second, after Carson struck out the first two batters, Luke Zimmerman doubled and Aiden Zimmerman and Allegretto both walked to load the bases for Marciniak, who tripled to right clearing the bases and giving the Rams a 5-0 lead. Marciniak then scored on a single by Ethan Wells.

Johnsonburg then knocked Carson from the game in the fourth when Allegretto and Marciniak walked leading off the inning. Ray Dean relieved and walked Wells to load the bases before a wild pitch and a ground out made it 8-0.

Mason Mershimer had a double for Moniteau.

Johnsonburg will take on Kane, a 6-1 winner over Curwensville, in the championship game at 5 p.m. Monday, May 31, at Showers Field in DuBois.

DUBOIS, Pa. – Three extra-base hits in th fifth inning helped Kane break a one-all tie on its way to a 6-1 win over Curwensville in the District 9 Class 2A semifinals at Showers Field in DuBois.

Jacob Costanzo started the rally with a leadoff double to left.

One out later, Costanzo scored on a Harley Morris double to right. Andrew Jekielek followed with a triple to left making it 3-1, and Jekielek scored on a sacrifice fly by Carson Whiteman.

The Wolves then tacked on two more runs in the sixth on an RBI double Curtis Barner and an RBI single by Landon Darr.

That was more than enough to make a winner out of Morris, who threw a complete-game gem.

Curwensville’s run came in the third inning on a one-out Keegan Wilson single that tied the game at one.

But with runners on first and second, Morris pitched out of the jam to preserve the tie.

Kane scored first in the second on a Curwensville error.

Kane had five extra-base hits out of its seven hits with Shane Ackley, Barner, Costanzo, and Morris all picking up doubles and Jekielek the triple. Morris scored twice.

Jake Mullins had a double for Curwensville with Tyler Lee scoring the Golden Tide run.

Kane will take on Johnsonburg, a 10-0 winner over Moniteau, in the title game at 5 p.m. Monday, May 31, at Showers Field in DuBois.

A four-run first inning set the tone for the Crusaders with Joe Tettis having the big hit in the inning, a two-run double that made it 3-0.

ECC tacked on two more runs in the second with David Anderson delivering an RBI double, and then in the third Tommy Slay had a run-producing two-bagger to make it 7-1.

Otto-Eldred tried to rally scoring three times in the bottom of the third to close within three, 7-4. Max Splain’s two-run double was the big hit of the inning for the Terrors.

But ECC scored single runs in the fifth, sixth, and seventh, to go up 10-4 before Otto-Eldred got one last run in the bottom of the seventh.

Slay, Dominic Zambonini, Luke Ginther, and Jordan DePrator each had two hits for the Crusaders.

Splain led Otto-Eldred going 2-or-3 with the double, a walk, a run scored, and three RBIs. Josh Rhinehart was 1-for-3 with a walk and two runs scored.

Tettis got the win going six innings allowing four runs, three earned, on three hits, three walks, and a hit batter while striking out five. Anderson gave up a run in the seventh on two hits.

ECC will play fifth-seeded DuBois Central Catholic, a 6-3 winner over top-seeded Clarion-Limestone, in the title game at 2 p.m. Monday, May 31, at Showers Field in DuBois.

Major walked two and struck out 16.

Gabe Johnson was 2-for-4 with a double and two RBIs to lead the Central Mountain offense, while Major helped himself going 2-for-2 with a walk, a run scored, and an RBI.

Also in the win, Cru Stover went 1-for-1 with a double, three walks, two RBIs, and three runs scored.

Chandler Ho had both of DuBois’ hits going 2-for-3.