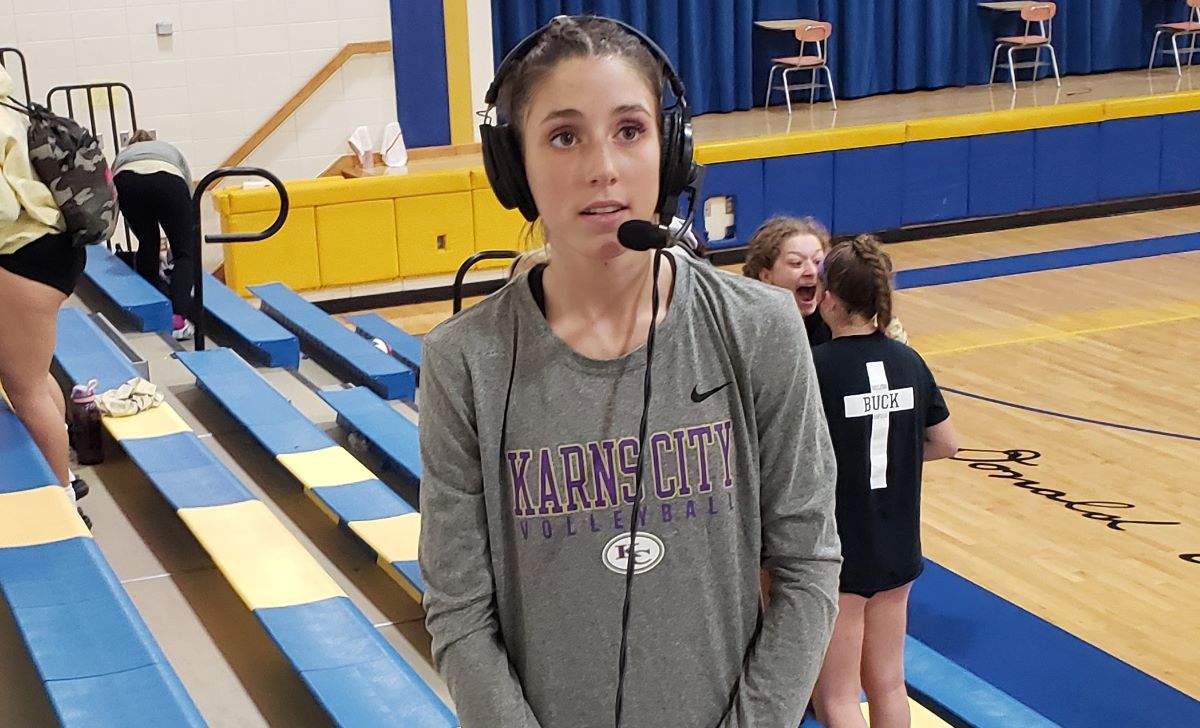 Led by seven kills from Emma Johns, the Lady Gremlins had six different players record at least one kill in the victory.

“It is always about trying to set the best player you can on the front row,” Johns, who added nine set assists and two digs while being named the Allegheny Grille of Foxburg Player of the Game, said. “Obviously, you don’t always get the best pass. But you have to work with that pass as a setter. Rosie (Carden) and I do a good job of kind of reading it and seeing who is on and who is off when they are hitting it. We just set whoever is best set for that bump that we get.”

At different points in the match, it was different players leading the way for the Lady Gremlins.

In the first set, Carden recorded all four of her kills and Ashley Fox had three aces to help Karns City to the 25-21 win.

It looked like it was going to be an easy set when the Lady Gremlins went up 20-11 but Union fought back partly behind two Dominika Logue kills to get within two, 23-21, before a hitting error got Karns City to set point.

In the second set, it was Ava Fox utilizing the middle of the court to record four of her five kills in the set.

Karns CIty led by just two, 10-8, early in the set before using an 11-3 run that was punctuated by a pair of Ava Fox kills to put the set away.

The third set was more of a battle for Karns City with Union taking its biggest lead in any set, 10-6, on a kill by Taylor Shick.

The Lady Gremlins evened things up at 11-all on a kill by Ashley Fox before Union continued to go up a point or two leading 16-14 after a Cheynne Dowling kill.

A hitting error and a net violation tied the set at 16 before Logue respond with a kill, one of five in the set and 10 in the match for the senior, to put Union ahead, 17-16.

After forging a tie at 17, a Nicole Hess kill gave Karns City its first lead in the set since 5-4, but a service error and a double hit gave Union one last lead, 19-18.

Union got back to within one, 22-21, on a Hailey Kriebel kill and looked like they had tied the set at 22 when Kriebel blocked a shot at the net. But she was called for reaching over the net – a correct call- awarding the point to Karns City making it 23-21. A passing error on Union then made it match point. A net violation on Johns made it 24-22, and then Johns went long with a push made it 24-23.

Ashley Fox, though, game up with the match-winning kill to send Karns City home a winner.

It was the sixth kill for Ashley Fox, who also had 15 digs and the three aces.

Carden added 11 set assists, an ace, and four digs to her four kills, while Ava Fox had five kills and 12 digs.

Kriebel added eight kills for Union with Keira Croyle running the Golden Damsels offense with 14 set assists and recording a pair of aces. Logue chipped in three aces of her own to go with the 10 kills, and Kennedy Vogle had 15 digs.

District 10 Tennis Doubles Champions Crowned
Cranberry’s Ferringer, Redbank Valley’s Huffman Earn Oct. 4-9 D9and10Sports Volleyball Performers of the Week
This website or its third-party tools process personal data.In case of sale of your personal information, you may opt out by using the link Do not sell my personal information.
×
Manage consent