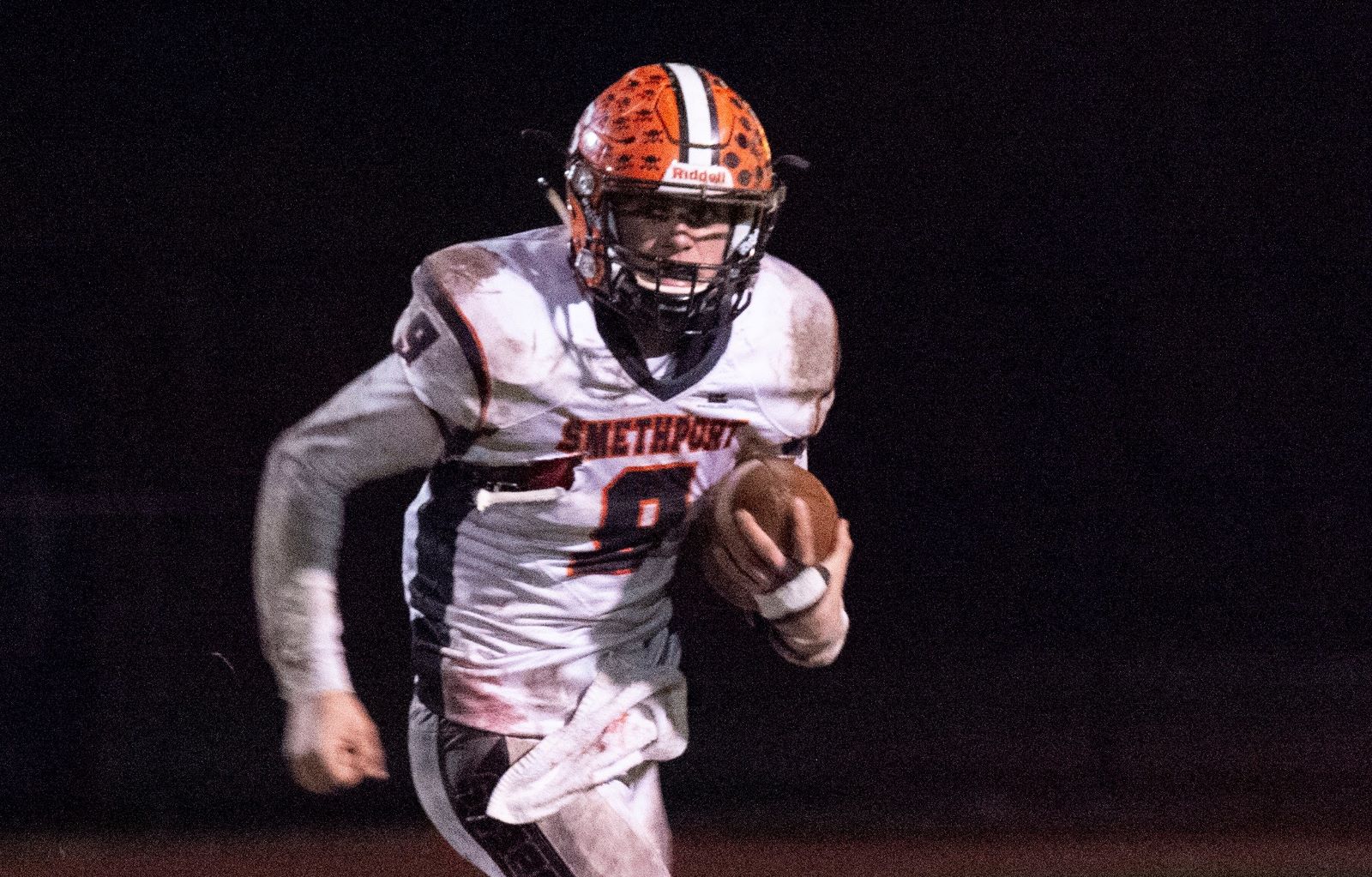 WARREN, Pa. – Smethport’s Noah Lent was a catalyst for a Hubbers’ team that completed an unbeaten regular season and advanced to the District 9 Class 1A championship game.

It was a truly special season for the junior quarterback/defensive back, and it helped him earn the Jim Kelly District 9 Player of the Year award powered by the Allegheny Grille of Foxburg.

Lent rushed for a District 9-leading 813 yards and 11 touchdowns while throwing for 617 yards and 13 scores on 39 of 89 passing with just three interceptions.

On defense, he was an anchor in the secondary for the Hubbers, who allowed 48 points all season, ranking second on the team with five passes broken up while adding an interception and 15 tackles.

Serving as the primary punter for Smethport, Lent averaged 34.4 yards per punt and placed three of his 15 boots inside the 20-yard line. He also was the kickoff specialist at times for the Hubbers, showing an ability to do everything he was asked.

Krug put together the finishing touches on a brilliant high school career in 2020 in helping lead the Raiders to the D-9 Class 2A championship game. He completed 164-of-237 passes (69%) for 2,369 yards, 31 touchdowns and four interceptions. He also added 216 yards and a pair of scores on the ground. For his career, he finishes with 8,362 passing yards and 108 passing touchdowns and 1,090 rushing yards and 13 scores.

Quite simply, Waltman was the most dominant defensive player in District 9 this season for the Class 2A champions. The 6’5”, 240-pound senior amassed 81 tackles, 14 of which went for a loss, as well as four passes defended and a pair of forced fumbles.

Bauer was a major reason the Flying Dutch averaged over 40 points per game. The 6-1, 268-pound senior helped pave the way for a passing attack that averaged 274 yards per game and a running game that notched 144 yards per contest.

The 176-pound Mansfield was a terror for opposing offensive lineman in 2020. He finished with 59 tackles for the D9 Class 1A champions, 17.5 of which were behind the line of scrimmage. He also led the team with 9.5 sacks and had four fumble recoveries.

Rupp had a breakout sophomore season. Offensively, he was the Gremlins’ leading receiver with 19 receptions for 316 yards and four touchdowns. On defense, he finished with 31 tackles and three interceptions.

A 7-1 record, a berth in the PIAA quarterfinals, and the program’s first District 9 title since 1996 make Gold a more than worthy recipient for Coach of the Year. His team did it with defense, allowing just 66 points and holding opponents to single digits five times.

“Any success we’ve had over the last two years is because of our lifting program,” St. Marys’ head coach Chris Dworek said. “He’s the No. 1 guy responsible for that! He organized it, created it. Our lifting program goes all year and is designed for in-season athletes in other sports during our offseason. We even have a pregame lifting program that the players love. Last season, Clemson was featured on a Thursday night game and they talked about their pre-game lifting routine – it was almost exactly like ours. Mike is also an excellent WRs and DBs coach.”

Verdilll, who also starred on the soccer field for Clarion-Limestone, put together an impressive season on the gridiron. He was 21-of-24 on extra points, with three field goals, including a long of 32 yards. He had 15 touchbacks on kickoffs and punted for an average of 35.5 yards, including three inside the 20.

Krug had a hand in all seven of his team’s touchdowns, throwing for five and opening the game’s scoring with a 44-yard TD run in the D-9 Class 2A semifinals.  Krug also caught his first career TD pass on a fake punt 58-yard pass from Robert Keth.

In all, Krug completed 16 of 23 passes for 389 yards with TD passes going to four different receivers while rushing for 56 yards on four carries. Keth caught five passes for 153 yards and a score while Brayden Kunselman had four catches for 118 yards and a TD.

Owen Colwell hit a 27-yard field goal with 4.7 seconds left to give Karns City the District 9 Class 2A title with a 16-14 win over Brookville. It was a stunning turn of events from the regular-season meeting, which saw Brookville blank the Gremlins, 44-0.

The game-winning kick, which came after two timeouts, one by each team, finished off a drive that started at the Gremlins’ own 42-yard line with 5:48 to play after the Gremlins defense held on a fourth-down play to get the ball back. The game-winning drive featured nothing but runs from Karns City, including a crucial fourth-down carry by Kaden Scherer three plays prior to the winning kick.

On a fourth-and-3 (and their season) from the Brookville 22-yard line, Schrerer went 10 yards for a first down after lining up in the wildcat formation and going around left end.

Brookville led 14-7 at halftime thanks to a 19-yard Jack Krug to Robert Keth touchdown pass and 1-yard Keth scoring run sandwiched between a 65-yard run by Scherer.

Karns City got within a point, 14-13, late in the third quarter on a Luke Garing 1-yard run, but the Gremlins tried a trick play on the extra point that failed.

Brookville had two chances to put the game away in the fourth quarter.

The first came after Scherer lost a fumble on a punt return giving the Raiders the ball at the 29-yard line. Two runs by Keth for nine yards put Brookville at the 20-yard line.

But on third down, Nathan Waltman blew through the line stopping Keth for a 2-yard loss. Then on fourth-and-3 from the 22-yard line, Waltman and Cole Coon stopped Keth for a yard loss.

Later in the quarter, Brookville was inside the 40-yard line but facing a fourth-and-11 when Zach Blair came up with a sack that gave Karns City the ball back setting up the game-winning drive.

According to Redbank Valley head coach Blane Gold, Carrillo is a true dynamo for the Bulldogs doing a little bit of everything.

On game days, he serves as the “get-back” coach making sure the Bulldog players are where they are supposed to be on the sideline while not getting penalized.

But even more importantly, he makes sure the players are provided food many times for the players on his own dime. He is the true definition of an unsung hero.

Kelly’s is most known as Hall of Fame quarterback of the Buffalo Bills who grew up in East Brady, Pa. and went to Miami (Fla). Kelly was inducted into the Pro Football Hall of Fame in 2002 after passing for over 45,000 yards as a pro, including two seasons in the USFL, with 320 career touchdown passes. He led the Bills to four straight AFC Titles.