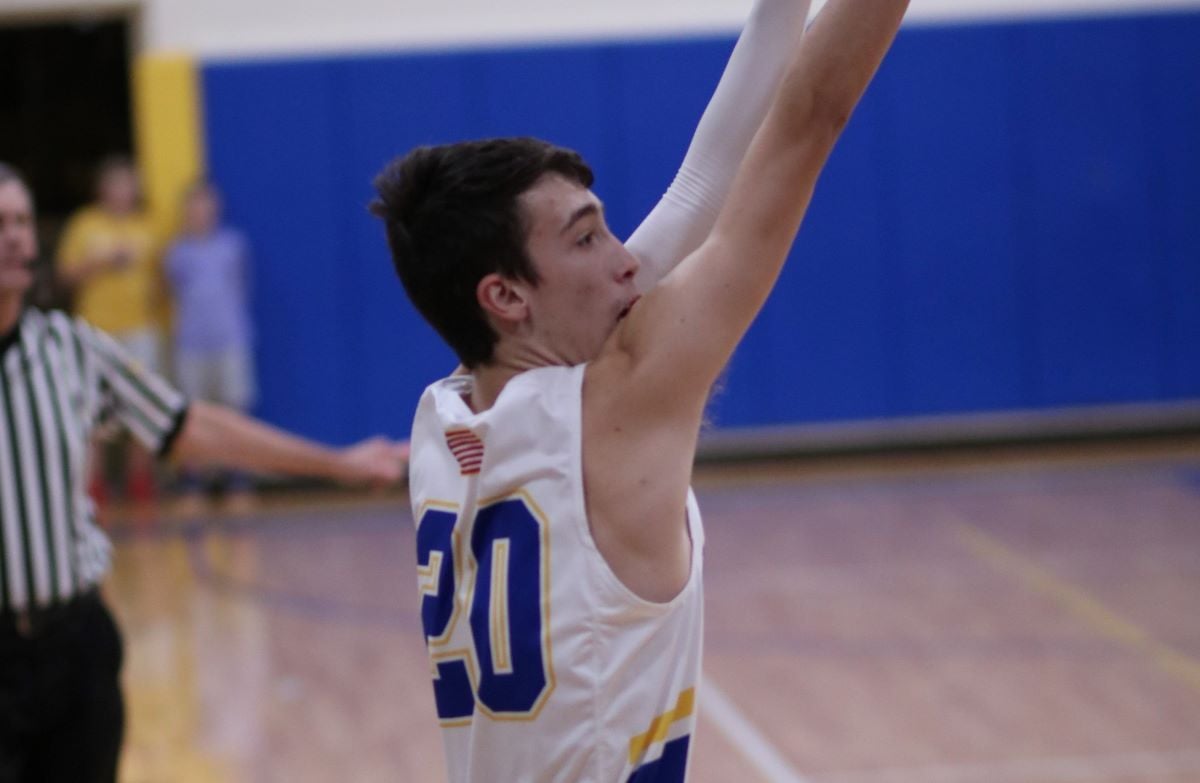 RIMERSBURG, Pa. – North Clarion almost pulled a rabbit out of a hat, but in the end Union withstood a near-costly turnover in the final seconds to beat the visiting Wolves, 52-50, in KSAC Small School action.

Up two with under 10 seconds left, Skyler Roxbury missed a free throw but Dawson Camper got the offensive rebound and was followed with 6.5 seconds to play.

Camper, however, missed both free throws and a scramble ensued for the rebound with Union calling timeout with players sprawled on the floor with 2.1 seconds to play.

Out of the time out, the Golden Knights tried to get the ball to Rainey near midcourt. The Union senior tipped the ball towards the North Clarion basket trying to kill the clock. But Collin Schmader was able to track the ball down before it went out of bounds and got an awkward shot attempt off that hit the underneath of the backboard as time expired.

Payton Johnston led Union with 16 points, including four in the fourth quarter, while Rainey, who also scored four fourth-quarter points, added 12 points and seven assists. Camper had a game-high 17 rebounds to go with six points.

Schmader had a game-high 22 points for North Clarion while hitting five 3-pointers. But Union kept him in check in the fourth quarter limiting him to just two points.

HUNTINGDON, Pa. – Chooch Husted scored six of his game-high 18 points in the fourth quarter, as DuBois broke a 38-all tie going to the frame and picked up a 52-49 road win over Huntingdon.

Joey Foradora also scored 18 points for the Beavers doing most of his damage in the first half when he hit four 3-pointers on his way to 16 points, while Ryan Kovalyak also reached double figures with 10 points.

Alec Cooper led Huntingdon with 17 points but was held scoreless in the fourth quarter, while Josh Bryson added 14 points, but only three in the fourth.

Jack Foster kept the Bearcats in the game scoring five of his 14 points in the final eight minutes. He hit four 3-pointers on the night.

The Gremlins, on the strength of two Cole Sherwin 3-pointers, built a 13-0 lead early only to watch Moniteau claw its way back into the game closing the gap to 25-24 with just over two minutes left in the third quarter.

But that is when Micah Rupp took over the game scoring nine of his team-high 17 points in the fourth quarter many part of the 16-5 run that helped Karns City regain a double-digit lead, 41-29.

Rupp talked about his game

Sherwin added 15 points, including seven in the fourth quarter, in the win.

David Dessicino added 11 points off the bench for the Warriors.

The Wolves led 36-33 going to the fourth quarter and used the free throws to hold off the Wolverines.

Sheffield had a chance to tie the game with 4.3 seconds left, but Tony Richards’ off-balance 3-pointer from the left corner got wedged between the backboard and the rim resulting in a held ball with the possession arrow in Kane’s favor.

The Wolves were then able to get the ball down court and dribble out the win.

Lucas McNeal had a game-high 17 points.

Austin netted 14 of his tallies after halftime.

Jake Franz chipped in seven for the Owls.

Park led the Elkers with 16 points with Allegretto adding 14.

Jake Liederbach added 12 points and Logan Rakow 10 for the Vikings.

CLARION, Pa. – Christian Simko scored 13 first-quarter points on his way to a game-high 28 to lead Clarion to an easy 84-35 win over visiting A-C Valley.

Behind Simko, who also added six rebounds and five steals, the Bobcats built a 31-19 lead at the end of the first quarter which expanded to 53-28 at the half with Simko adding eight more second-quarter points.

Jan. 7, 2022 D10 Boys/Girls Hoops: Franklin Boys Power Past Grove City; Barzak, Cochranton Top Youngsville
DCC Boys Snap 17-Game Losing Streak to ECC while Ending Crusaders 26-game AML Win Streak
We use cookies on our website to give you the most relevant experience by remembering your preferences and repeat visits. By clicking “Accept All”, you consent to the use of ALL the cookies. However, you may visit "Cookie Settings" to provide a controlled consent.
Cookie SettingsAccept All
Manage consent