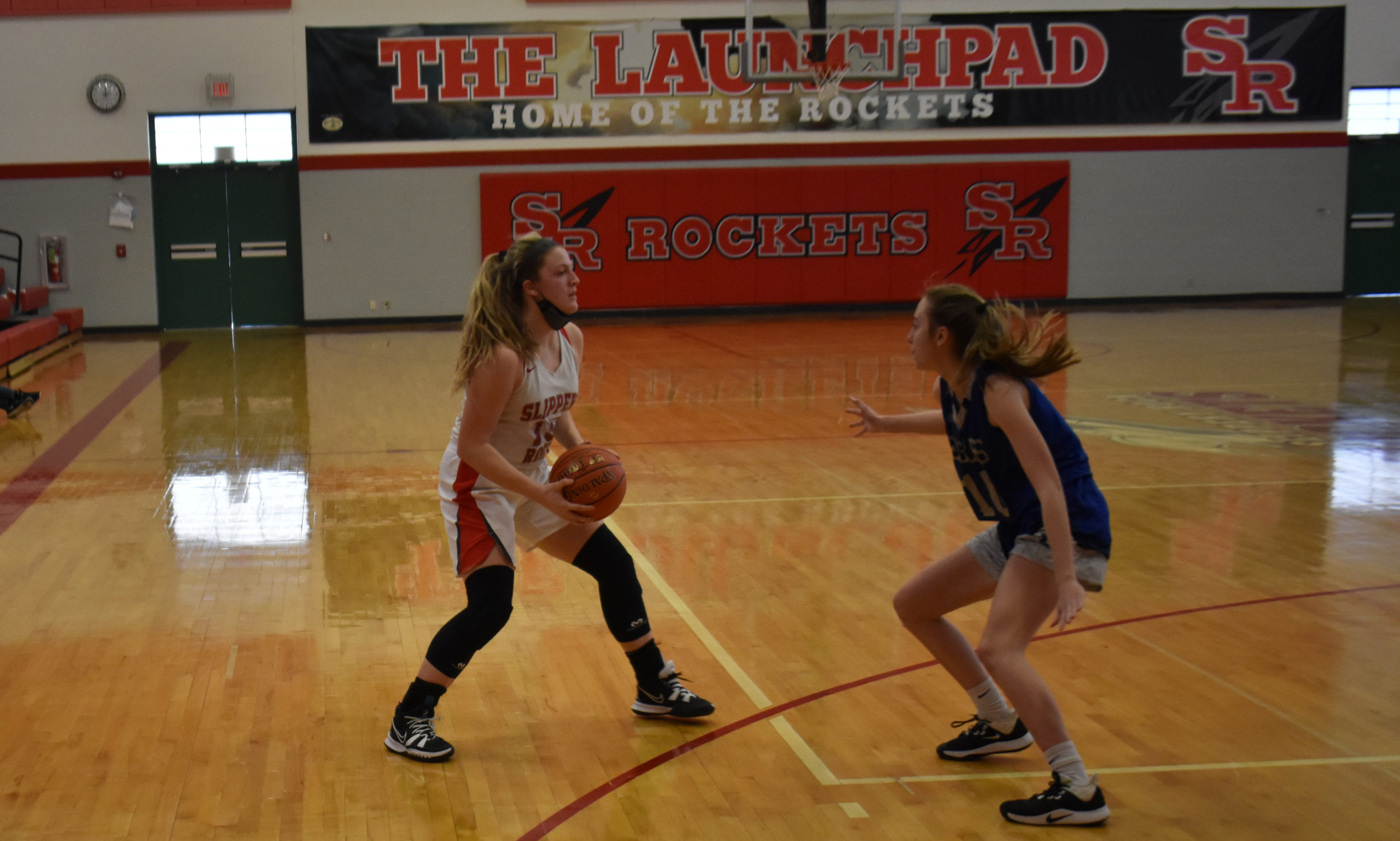 Slippery Rock's Bronwyn McCoy had eight points in a 26-19 win over Grove City.

Gianna Bedel and Bronwyn McCoy scored eight points each for Slippery Rock in the defensive slugfest, with both knocking down a pair of key free throws in the fourth quarter to preserve the lead.

Grove City led 11-10 at halftime and got six points each from Piper Como and Emma Santom, while Hannah Rieber added five.

Lakeview’s Reese Gadsby made a layup to give the Sailors a 38-36 lead with 12 seconds remaining in regulation, but Cano came back down the floor and tied the game with three seconds to go.

Josie Lewis also had a big game for Greenville with 13 points. Cano scored 16 of her 24 points in the second half and overtime, while Lewis was 10-of-11 from the free-throw line, including 6-of-6 in overtime.

WEST MIDDLESEX, Pa. – Carlie Beatty had a monster double-double with 20 points and 20 rebounds as West Middlesex earned a 66-43 Region 1 win over Farrell.

Emily Anthony had 19 points and dished out eight assists for the Big Reds, while Emma Mild had 13 points and Caitlin Stephens 10 rebounds.

EDINBORO, Pa. – Emma Ruhlman had 15 points and pulled down 11 rebounds to lead a balanced Warren effort in a 51-23 Region 6 win over General McLane.

Sammie Ruhlman also had a big game for Warren with 13 points (9 in the first half), while Riley Childress scored 11 of her 13 points in the second half.

Halle Kuzminski pulled down eight rebounds for Warren, which led 22-12 at halftime.

Garrity scored 18 of her points in the first half, while Caroline Zentis added nine, Ella Garrity seven, and Sara Gennuso six.

Ella Gallo netted 12 points for the Cardinals, who led 33-12 at halftime, while Jaylin McGill added 10.

Bashor also pulled down 12 rebounds in the win, while Lauren Billingsley and Estella Adams had nine points each. Franklin led 22-14 at halftime and also got five steals from Gabby LaJuenesse.

Hayden Keith added 14 points for the Golden Eagles, while Layke Fields had 13 and Bellah DiNardo 11.

DiNardo is just four points shy of 1,000 for her career. KC outscored the Orioles 31-0 in the second quarter.

The Tigers built a 13-point first-quarter lead en route to the win.

Bailey Varndell netted 14 points and Izzy Eimer 10 for the Tigers.

Jayden McBride was also in double figures for Villa with 18 points. The Victors led 45-12 at halftime.

Joce Ollinger had 13 points for the Lakers, while Lexi DiFuccia added 11 and Anna Tranum 10. The Lakers led 44-4 at halftime.

Alena Krysiak and Danielle McKee had three points each for Iroquois.

Annalee Gardner had 10 points for Wilmington, which led 39-8 at halftime.

Jillian Soder also had a strong game for the Bison with 17 points, while Kelsie Skinner netted 13.

COCHRANTON, Pa. – Danny Bruce had a monster game with 30 points as General McLane powered past Cochranton in non-region action, 81-43.

The Lancers knocked down nine threes in the game, with Bruce hitting four.

Brad Weber had 14 points for GM and Logan Anderson 13. The Lancers used a 27-12 run in the third quarter to pull away.

Kyle Hoffman scored a team-high 15 points for Cochranton, while Chase Miller had 12 and Wyatt Barzak 10.

Ryan Mayes had 19 points for North East, while David Gibson had 12 and Owen Kemp 11.

Dom Gentile had 13 points for Fort LeBoeuf and Carson Papay 11.