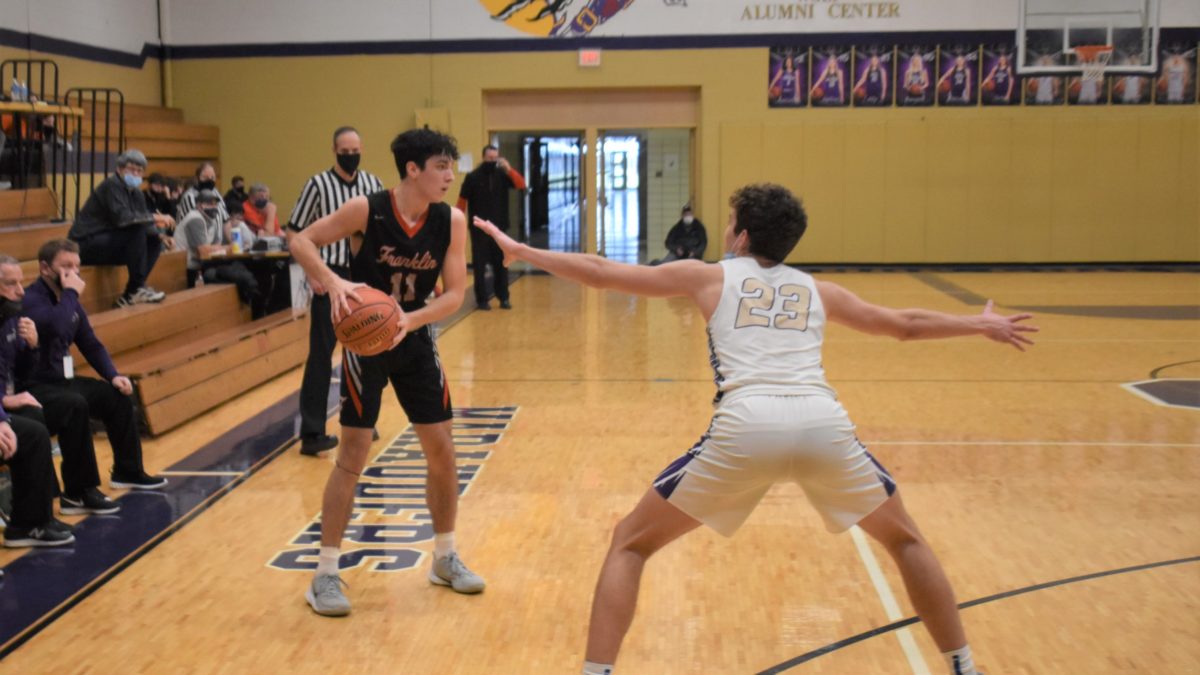 Franklin's Luke Guth had 19 points in a win over Hickory on Tuesday. File photo by Andy Close.

HERMITAGE, Pa. – Franklin handed Hickory its first region loss in three years with an 81-69 win in their Region 4 showdown.

The Knights trailed 32-30 at halftime, but came out in the second half and outscored Hickory 33-19 in the third quarter.

Luke Guth scored 12 of his 19 points in the third, while Damon Curry had eight of his team-high 20 in the frame. Easton Fulmer also scored 18 points for the Knights, while Scott Walters added 12.

The Knights overcame a big game from Hickory’s Joey Fazzone, who scored 17 of his game-high 24 points in the second half

Aidan Enoch drained five triples on his way to 17 points for the Hornets, while Jackson Pryts had 15.

GREENVILLE, Pa. – General McLane outscored Greenville by 14 points in the first half to a 54-37 non-region victory.

Danny Bruce scored eight of his game-high 13 points in the first half for GM, while Jeremiah Schreiber netted 12 and Owen Martin and Jackson Dailey seven each.

Jalen Ritzert scored seven of his team-high 11 points in the fourth quarter for Greenville, while Noah Philson added 10 and Logan Lentz eight.

Owen Becker led Warren with 13 points, as the Dragons had 10 different players make their way into the scoring column.

Parks Ordiway finished with 12 points for Warren, while JT Blum had 10 and Bryce Blair and Tommy Nyquist eight each.

LAWRENCE PARK, Pa. – Eisenhower built a 15-point first-quarter lead and held off a late Iroquois rally for a 64-62 win.

Wyatt Lookenhouse had another big game for the Knights, pouring in 25 points. Curt Darling finished with 19 points for Ike and Kyler Black 13.

The Knights overcame a big game from Iroquois Ben Burkhardt, who scored 33 points, including six threes. Corrion Bombest added 16 for the Braves.

UNION CITY, Pa. – Matt Bennett scored 13 of his 27 points in the first quarter as Union City earned a 74-43 Region 2 win over Youngsville.

Union City led 34-2 at the end of the first quarter.

Waylon Moore had a team-high 12 points for Youngsville, while Blake Myers netted 10.

FARRELL, Pa. – Malachi Owens led a balanced Farrell effort with 16 points as the Steelers earned a 71-58 win over West Middlesex.

The Steelers held a 42-32 edge in the second half on their way to the win.

Lamont Samuels went 11-of-12 from the free-throw line and finished with 15 points for the Steelers, while Omar Stewart added 13.

SAEGERTOWN, Pa. – Cambridge Springs outscored Saegertown 25-15 in the second half on its way to a 45-41 Region 2 win.

Nathan Greer lead a balanced effort for the Eagles with 13 points, while Josh Dreves added 11 and Landon Haggart and Dylan Stull eight each.

Dreves scored nine of his 11 points in the first-quarter run for GC.

Santino Piccirilli and Lamont Austin had 10 points each for Sharon.

James Sitter led a balanced effort for the Tigers with 22 points, while Logan Frazao netted 15 and Jeremy Frazao 12.

John Seyboldt and Tyler Shultz added six points each for the now 8-0 Tigers.

MEADVILLE, Pa. – In a back-and-forth interdistrict affair, unbeaten Brookville pulled out a 69-67 road win over Meadville.

The Raiders (8-0) were down three, 53-50, heading to the fourth quarter but scored six points in the opening minute of the quarter to take a 56-55 lead on a Danny Lauer bucket.

Brookville extended the lead to as many as five points in the quarter, but Meadville came back and was within two, 64-62, when the Raiders’ Hunter Geer scored on a putback with 1:05 left to make it 66-62.

Lucas Luteran kept the Bulldogs alive with a 3-pointer with just under 10 seconds left to make it 68-65, but Lauer hit the front end of a one-and-one with 6.4 seconds to play to make it 69-65. Meadville’s Khalon Simmons then scored at the horn to set the final tally.

Meadville had the early advantage going ahead 27-17 early in the second quarter before Brookville got back within three, 35-32 at halftime.

Ruhlman had a career-high 24 points for the Raiders with Lauer adding 18, including seven in the fourth quarter. Ian Pete chipped in nine, and Geer eight for Brookville.

D’Andre Whitman had 14 points and Reece Henderson 10 for Rocky Grove.

Rayge Michaud and Connor Perrye had 11 points each for Conneaut.

The Huskies built a 37-19 halftime lead on their way to the win.

The Bobcats led by 11 at halftime and outscored the Eagles 24-8 in the third quarter.

Bobby Yost had 14 points for the Bobcats and Colton Trimble seven.

Sam Gonzalez had 14 points for EFC.

FAIRVIEW, Pa. – Hope Garrity drilled seven threes and 16 of her game-high 31 points in the first quarter to lead Fairview to a 64-12 win over Meadville.

Fairview led by 19 after the first quarter en route to the win.

The Sailors built a 21-12 halftime lead en route to the win.

Stacie Weimert pumped in a game-high 20 points for Jamestown.

Jan. 4, 2022 D9 Boys Hoops: Zimmerman OT Buzzer-Beater Lifts Jburg Past Smethport; Brookville Tops Meadville; ECC Rallies for Win
Jan. 4, 2022 D9 Girls Hoops: North Clarion, C-L, Austin, Johnsonburg Get Close Wins
We use cookies on our website to give you the most relevant experience by remembering your preferences and repeat visits. By clicking “Accept All”, you consent to the use of ALL the cookies. However, you may visit "Cookie Settings" to provide a controlled consent.
Cookie SettingsAccept All
Manage consent