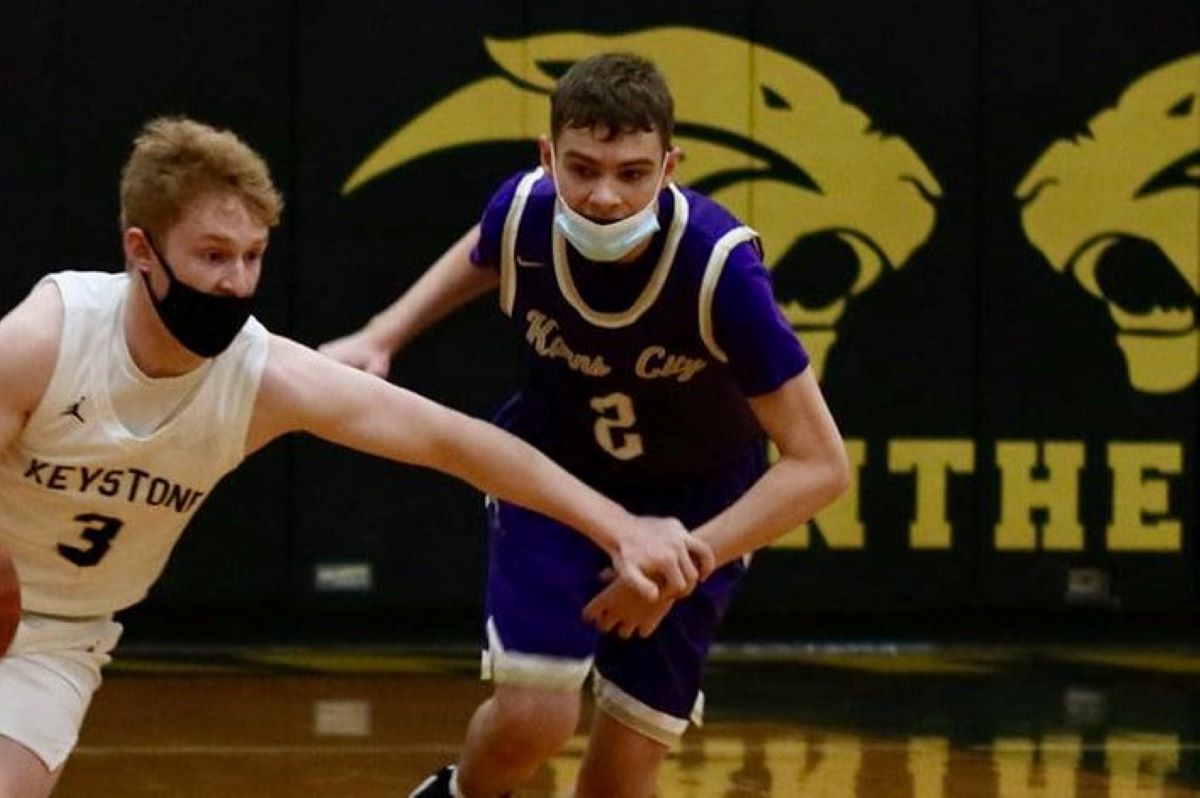 Taite Beighley (No. 2 in purple) scored 26 of his 38 points in the fourth quarter to rally Karns City past Union Thursday. File photo by Mary Rearick

Beighley hit five fourth-quarter 3-pointers and scored 26 points in the quarter to help the Gremlins outscore the Golden Knights 31-16 after entering the quarter trailing 41-30.

Micah Rupp added 16 points for the Gremlins, who are still without Luke Cramer (ankle injury).

Dawson Camper had a double-double for the Golden Knights with 10 points and 11 rebounds, and Zander Laughlin also scored 10 points.

AUSTIN, Pa. – Christian Furman scored eight of his game-high 19 points in the fourth quarter to help Coudersport pull away from Austin for a 45-37 NTL road win.

The Falcons led by two, 28-26, going to the fourth quarter but put some separation between themselves and the Panthers in the final eight minutes thanks in large part to Furman, who also had six rebounds and four steals.

The Panthers trailed 35-33 going to the fourth quarter but got seven points from Wingard and six from Henry to win their sixth straight.

Wingard had another big night with 23 points and 11 rebounds with Zander McHenry adding 12 points and six steals and Henry eight points.

WEST SUNBURY, Pa. – Behind a season-high 30 points from Collin Schmader, North Clarion ran past Moniteau, 77-68, on the road.

Schmader scored 28 of his 30 in the first three quarters and went a perfect 8-for-8 from the free-throw line finishing just four points shy of his career-high 34 points last year vs. Freedom. He added seven rebounds, four steals, and four assists.

KANE, Pa. – Behind 18 points and six rebounds from Andy Jekielek, Kane picked up a 53-44 home AML North win over Sheffield.

Merryman hit four 3-pointers in the game and was joined in the scoring parade by 10 points from Noel Bunyak and none from Colin Zerbe.

Bryson Bain hit eight of them while scoring a season-high 26 points, while Chris Marshall and Owen Clouse each hit three with both players finishing with 17 points.

Marquese Gardlock also hit two triples on his way to seven points and Mason Clouse and Breckin Minich each hit one.

Jan. 27, 2022 D9 Girls Recaps: Coudy Edges NoPo; St. Marys, Punxsy Get D9 League Wins
Jan. 28, 2022 District 9 and District 10 Basketball Schedules Powered by Hunter’s Station Golf Club
We use cookies on our website to give you the most relevant experience by remembering your preferences and repeat visits. By clicking “Accept All”, you consent to the use of ALL the cookies. However, you may visit "Cookie Settings" to provide a controlled consent.
Cookie SettingsAccept All
Manage consent