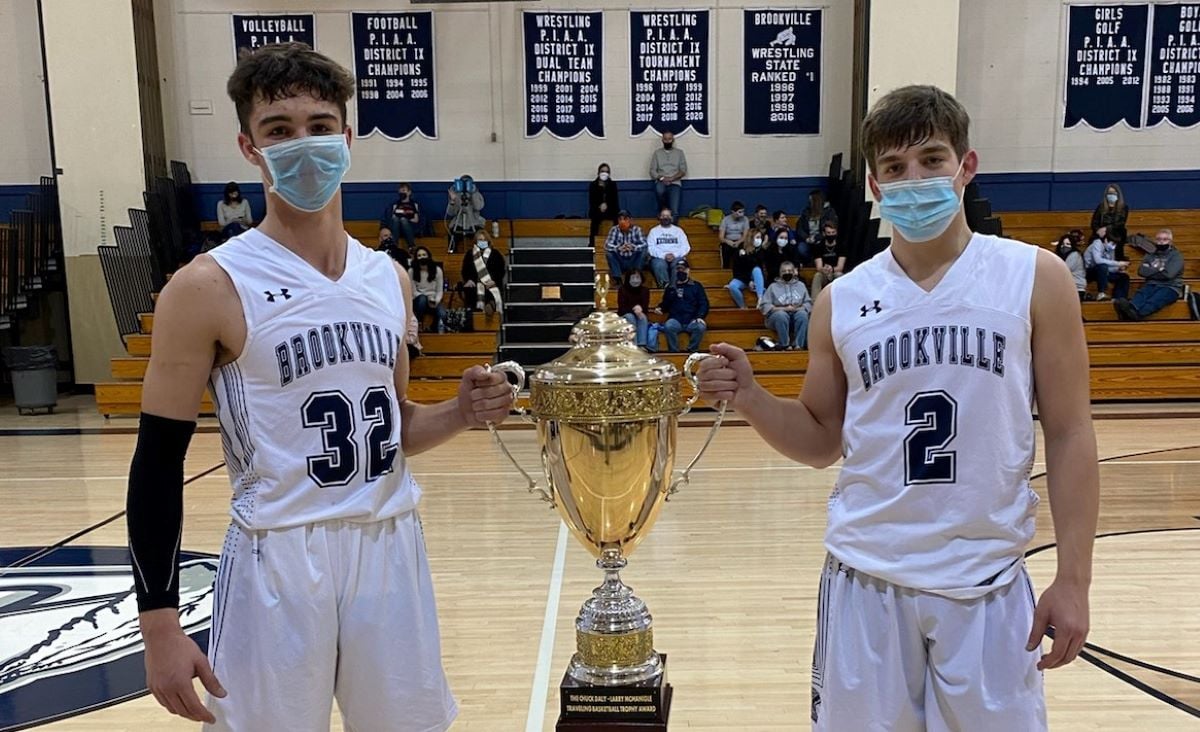 BROOKVILLE, Pa. – Retaining the Chuck Daly/Larry McManigle Traveling Trophy for the third straight year since the award was established prior to the 2018-19 season, Brookville ran away with a 69-45 win visiting over Punxsutawney Wednesday night.

Noah Weaver and Ryan Heigley each scored 12 points for the Chucks.

CLARION, Pa. – Clarion became the 11th District 9 team since the start of the 2000-01 season to score 100 points in a game in the first in nearly two years when it rolled past visiting Venango Catholic, 100-37.

The Bobcats had 91 points by the end of the third quarter after posting 67 in the first half thanks to a 36-points first quarter and a 31-point second quarter. Clarion led 67-26 at halftime and the entire second half was played with a running clock under the PIAA’s 30-point Mercy Rule.

Hunter Craddock scored 11 of his game-high 37 points in the first eight minutes and had netted 24 points by halftime.

Beau Verdill, meanwhile, scored nine first-quarter points and finished the contest with 16 points, while Cal German scored 19 points and Christian Simko 13 points while hitting all three of Clarion’s 3-pointers in the game.

The Bobcats made 44 shots from the field and were 9 of 13 from the free-throw line.

Andrew Burda paced Venango Catholic with 11 points, all in the first quarter.

Bain led the Bulldogs with 21 points and eight rebounds with Marshall adding 18 points and six assists.

ELLWOOD CITY, Pa. – Kyle Pry scored 10 of his game-high 19 points in a pivotal third quarter, as visiting Moniteau picked up a 54-43 win over Riverside in Ellwood City.

The Warriors trailed 25-22 at the break but outscored the Beavers 22-7 in the third quarter to help decide the game.

Tanner Williams added 11 points in the victory for Moniteau.

Glover scored a game-high 29 points to go with seven rebounds, five assists, four steals, and a blocked shot for the Panthers.

Noah Shutt and Ty Stover each scored 12 points for Galeton, which was making its long-anticipated season debut.

JOHNSONBURG, Pa. – Katie Sheeler made two free throws and assisted on field goals from Anna Merry and Bri Heller in the final couple of minutes to help Otto-Eldred rally from a point down to pick up a 43-40 win at Johnsonburg.

That capped a monster game for Sheeler who scored a game-high 31 points while adding four steals.

Kaci Stelene had a double-double for Johnsonburg with 10 points and 13 rebounds, while Ella Lindberg grabbed seven rebounds with Annasophia Stauffer and Julia Jones each scoring nine points.

MARIENVILLE, Pa. – Emily Lauer scored all 27 of her points in the first three quarters to lead Keystone to a 64-21 win over Forest Area at East Forest.

Maddie Dunlap added 13 points for the Lady Panthers, who led 16-0 to start the game, while Natalie Bowser added eight points.

Aslyn Pry also had a big night for the Lady Warriors with a double-double of 18 points and 10 rebounds to go with four assists and four steals. Kendall Sankey chipped in eight points, and Abby Rottman contributed three points and four assists.

Emma Huffman added 10 points for the Lady Bulldogs who also got eight points apiece from Madison Foringer and Ryleigh Smathers and seven tallies from Alivia Huffman.