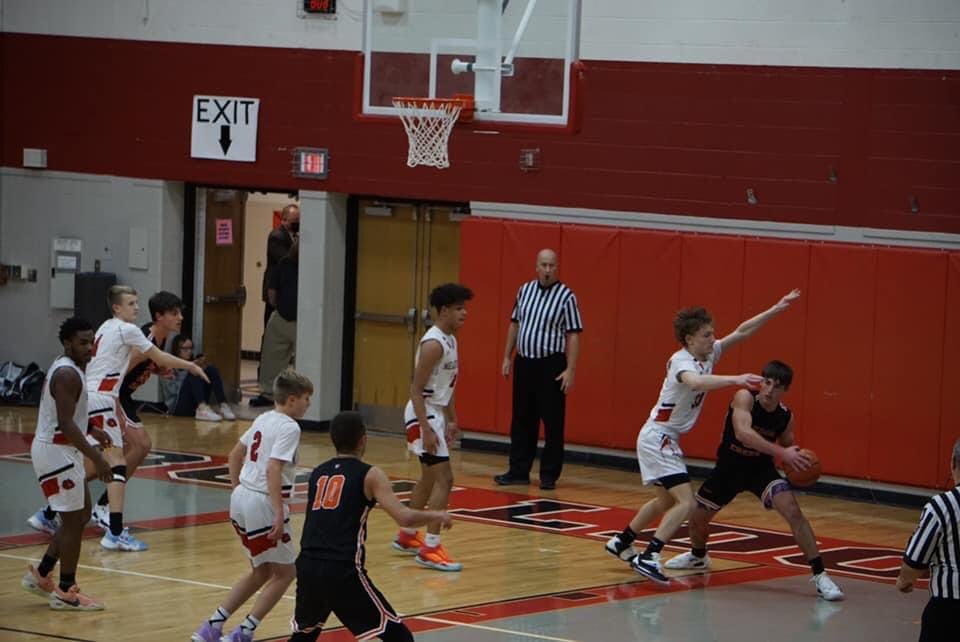 The Bulldogs overcame a monster effort from Greenville’s Jalent Ritzert, who poured in 33 points.

Meadville jumped out to an eight-point lead after the first quarter and led by seven both at halftime and after the third quarter.

Ritzert scored 18 of his points in the fourth quarter as the Trojans attempted to come back.

Simmons scored nine points in the fourth quarter to help seal the deal for the Bulldogs.

Simmons was one of four Bulldogs in double figures, as Jack Burchard finished with 19 points, while Kellen Ball had 16 and Lucas Luteran 15. Ball scored 12 of his points in the second half.

Logan Lentz also had a big game for Greenville, pouring in 22 points, including 11of-12 from the free-throw line. Brady Kinkaid and Noah Philson were also in double figures for Greenville with 11 and 10 points respectively.

SHARON, Pa. – Easton Fulmer scored 21 points to lead three Franklin players in double figures as the Knights rolled to a 71-24 win over Sharon.

Fulmer scored 14 of his points in the second quarter as the Knights built a 41-17 halftime advantage.

Damon Curry scored 14 points for the Knights, while Luke Guth netted 13. A total of ten different Knights made their way into the scoring column.

Connor Porterfield and Garrett Hoffman had five points each for Franklin.

The Oilers raced out to an 18-8 halftime lead against the Gremlins, who were playing without leading scorer Luke Cramer.

Taite Beighley returned to the lineup for Karns City after missing a couple of games and scored a game-high 15 points with Micah Rupp adding nine and Braden Grossman eight.

SUGARCREEK BOROUGH, Pa. – Isaac Clayton had a monster game, erupting for 39 points in a 71-57 win over Mercer.

Included in Clayton’s effort was an astounding 22-of-22 effort from the free-throw line.

Jake Mattocks had 19 points for Mercer.

FARRELL, Pa. – Kennedy Catholic scored 46 points in the second half in a 67-49 win over rival Farrell.

Elijah Harden and Malik Lampkins-Rudolph scored 17 points each for Kennedy Catholic, while Gio Magestro had 16.

Lamont Samuels had 17 points for Farrell and Omar Stewart 11.

ERIE, Pa. – Nicky Lydic had 10 points and nine rebounds as Cathedral Prep held off MCS 46-42 in the consolation game of the Burger King Classic.

Jake Sambuchino finished with nine points for the Ramblers.

Lane Smith added 13 points for the Sailors in the win.

Kyle Stringert had 13 points and Karson Cropp 11 for Commodore Perry.

Hunter Villa led the way for the Bison, scoring 18 points.

Dom Russo added 14 points and Ronan Dorler 11 for the Bison.

Damien Micco had 15 points for Wilmington and Tuff McConahy 12.

ERIE, Pa. – Layveon Gore scored 23 points, including the go-ahead bucket with eight seconds remaining in a 69-68 win over State College.

Kre Thompson also knocked down a pair of big fourth-quarter threes for Erie en route to the win.

Allderdice, which also got 12 points from Michael Quigley and 11 from Avery Ryban, outscored McDowell 32-24 in the second half en route to the win.

Tyler Grove had 15 points and Nick Grimm 11 for McDowell.

Childress scored 14 of her points in the first quarter and made five threes in the game. Emma Ruhlman had 16 points and 12 rebounds for the Dragons, who built a 34-1 halftime lead en route to the win.

Childress earned Allegheny Grille of Foxburg Player of the Game honors and talked about the win afterward:

Eight different Warren players scored in the win, with Gracie Ruhlman chipping in with eight points.

The Golden Eagles outscored St. Joe’s by seven in the fourth quarter en route to the win.

Gilmore was one of four Golden Eagles in double figures, as Layke Fields tallied 11 points and Bellah DiNardo and Monique Vincent 10 each.

The Rockets led 21-13 after three quarters en route to the win. The Rockets avenged a last-second loss to the nights in December to split the season series.

Mackenzie Dunn had 10 points for Eisenhower.

Lauren Konkol had 15 points for Seneca.