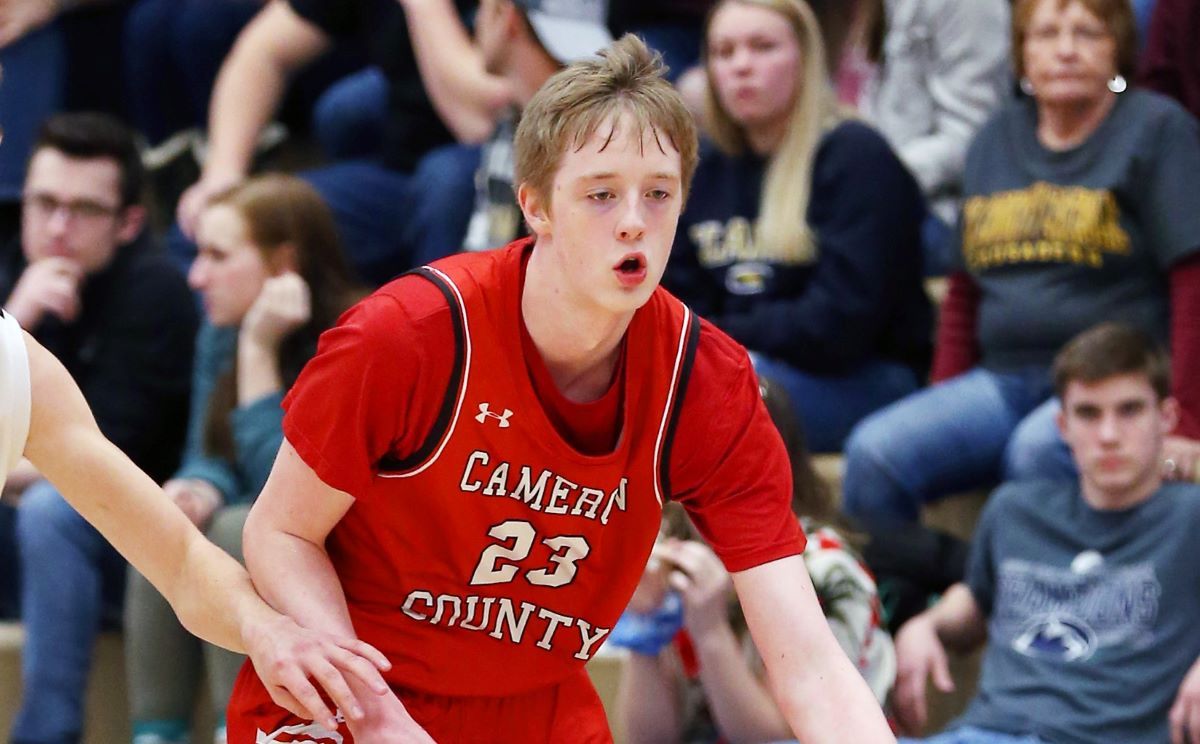 Gavin Morton played a key role in Cameron County's win over Johnsonburg in a battle of two of the top-tier 1A teams in D9 Saturday. Photo by Paul Burdick. Check out more of Burdick's work here

EMPORIUM, Pa. – Cameron County built a seven-point halftime lead then held off a comeback attempt by visiting Johnsonburg to pull out a 48-44 win.

The Raiders led 28-21 at the break thanks in part to Gavin Morton’s nine points.

But Johnsonburg got 10 points from Cam Stelene in the third quarter to outscored Cameron County 14-10 in the quarter and get within three, 38-35, going to the fourth.

Caden Beldin led Cameron County with 16 points, including six in the fourth quarter, with Morton and Hayden Brown each scoring 11 points.

Gabe Watts paced the Rams with 15 points with Stelene adding 14 and Eric Christoff 10.

DUBOIS, Pa. – Lennon Lindholm hit five 3-pointers on his way to a game-high 20 points to lift DuBois to a 58-37 victory over visiting Penns Valley.

Chooch Husted added eight points in the win for the Beavers.

The teams were tied at 34 at the end of 24 minutes before the Panthers were strong from the line in the fourth quarter to grab the win.

Skylar Crawford and Jacob Hooftallen each hit 3 of 4 free throws in the fourth quarter for Austin, while Jackson Glover was 2 of 2 in the quarter while scoring four of his game-high 28 points in the final eight minutes.

Glover was a big reason the game was tied going to the final eight minutes, as he scored 11 of Austin’s 15 third-quarter points. Glover had a strong all-around game adding five steals, three rebounds, and three assists.

Bracken was explosive in the third quarter netting 13 of Harmony’s 21 points to help the Owls turn a tie game at the half, 20-20, into a 41-33 lead after three quarters.

Trevor Lansberry led Curwensville with 20 points, including 12 in the second half, with Ty Terry scoring 11 points, all after halftime.

Jarid Wilmoth hit three 3-pointers on his way to 10 points for Bradford.

WARREN, Pa. – Ben Berdine scored 17 of his game-high 31 points in the second half to help Warren pull away from visiting Punxsutawney, 64-47.

The Dragons led by just four, 29-25, at halftime before Berdine scored 13 third-quarter points to push the lead to nine, 48-39, going to the final eight minutes. Parks Ordiway then hit a pair of 3-pointers in the fourth quarter to help seal the victory.

KARNS CITY, Pa. – Chase Beighley scored 19 of his game-high 30 points in the second half, including 12 in the fourth quarter, to help Karns City pull away from visiting Clarion-Limestone, 78-51.

The Gremlins led 24-20 at halftime but outscored the Lions 54-31 in the second half including 30-15 in the fourth quarter to secure the victory.

Beighley completed a solid all-around night with six assists and six steals while Nathan Waltman had a double-double with 17 points and 14 rebounds while also adding four assists.

COUDERSPORT, Pa. – Hayden Keck got hot in the second half to help Coudersport turn a two-point halftime lead into an 18-point, 56-38, victory over visiting Smethport.

Keck hit four second-half 3-pointers among his seven second-half buckets while scoring 18 of his game-high 28 points after the break to help the Falcons take a 26-24 halftime advantage and turn it into an easy win.

Keck scored 13 of his points in a 16-point third quarter for Coudersport.

Christian Furman added nine points in the victory for the Falcons, while Richie McDowell led Smethport with 14 points, 11 of which came in the first half including nine in the first quarter.

Layne Shall added nine points for the Hubbers who also got seven from Alex Ognen.

ST. MARYS, Pa.- St. Marys used a strong first quarter to set the tone in a 39-26 win over Ridgway in the long-awaited season opener for both teams at the Dutch Oven.

Mitchell Reiter scored seven of his team-tying high nine points in the first quarter to help the Dutch to an 11-2 lead at the end of eight minutes.

The advantage expanded to 18-7 at halftime before it remained at 11 points, 23-12, going to the fourth quarter.

Dan Park had a game-high 14 points for Ridgway.

PUNXSUTAWNEY, Pa. – Outscoring visiting Clarion by 19 points in the fourth quarter, Punxsutawney pulled away from the Lady Cats to a 59-33 win.

The Lady Chucks led 20-15 at halftime and 35-28 going the fourth quarter before blowing the game open.

Weaver, who scored eight of her 14 points in the fourth quarter, completed a double-double with 10 rebounds while also adding three assists, three steals, and two blocked shots. Seven of her rebounds were on the offensive glass.

FOXBURG, Pa. – Rachel Cullen scored a season-high 15 points to lead A-C Valley to a 53-27 win over visiting Forest Area in the season-opener for Forest Area.

Cullen netted seven of her points in a 20-point first quarter for the Lady Falcons helping A-C Valley take a 20-7 lead at the end of eight minutes.

KARNS CITY, Pa. – Emily Lauer hit 5 of 6 free throws in the fourth quarter to help visiting Keystone pull away from Karns City for a 32-19 win.

The Lady Panthers led by just three, 19-16, going the fourth quarter before going 7 of 10 from the line in the final eight minutes to pull away.

Jozee Weaver tied Lauer for team- and game-high honors for Keystone with 10 points, including four in the fourth quarter.

OIL CITY, Pa. – Behind 18 Gwen Siegel points North Clarion hit the road and picked up a 55-14 win over Oil City.

Amya Green added 10 points in the victory for the She-Wolves who also got seven points from Emily Aites.