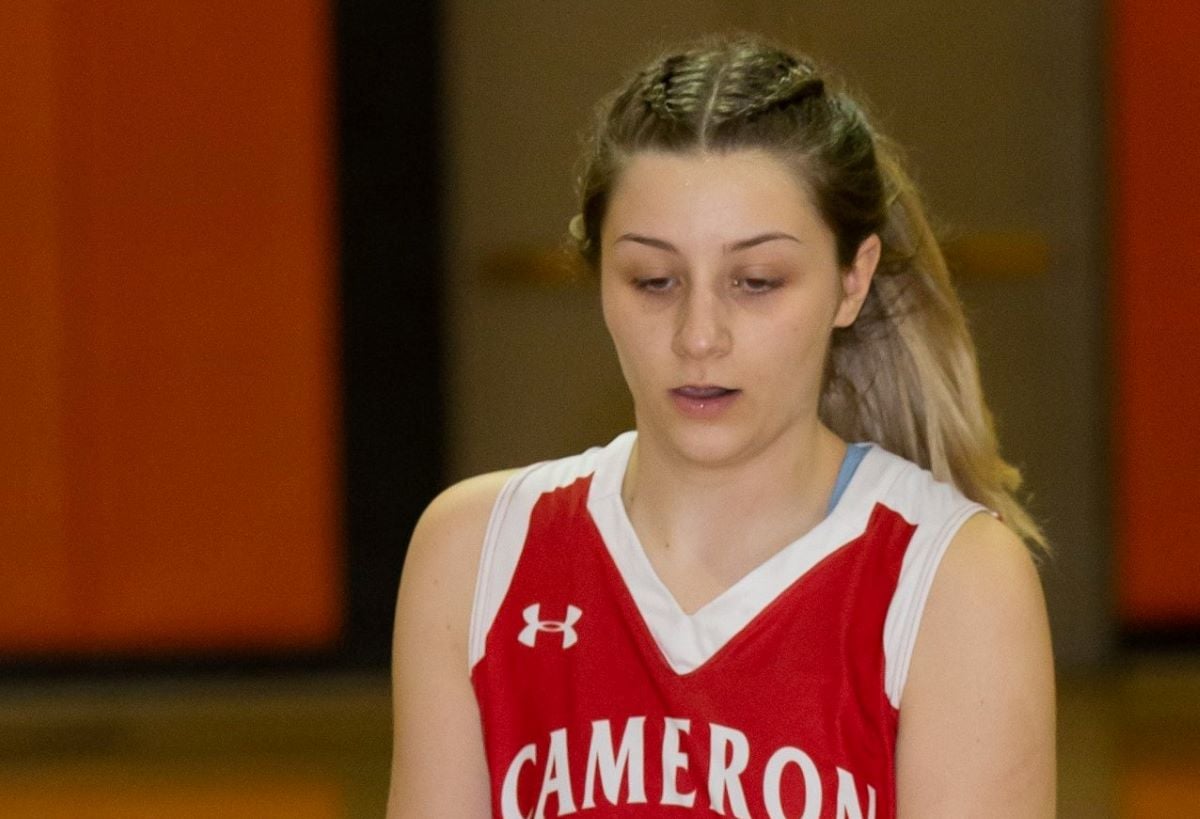 Mallory McKimm hit the game-winning 3-pointer with under 5 seconds left for Cameron County Friday night in a win at Otto-Eldred. Photo by Patrick Crants. See more of Crants work here.

The Lady Raiders, who led by two, 25-23, after three quarters despite not scoring in the third quarter – it helped that Otto-Eldred scored just two third-quarter points – found themselves down 33-30 with 1:48 to play when McKimm tied the game with a 3-pointer.

Reggie Goodrow gave Cameron County life when she hit a 3-pointer from the top of the circle with 20 seconds left to make it a one-point game, 37-36.

Then, after Otto-Eldred missed the front end of a one-and-one, Cameron County got the ball up the court and into the right corner where McKimm nailed the go-ahead 3-pointer.

Klawuhn hit a 3-pointer with around two minutes to play to put the Lady Crusaders up four then hit two free throws with 11 seconds left to expand a 38-37 lead into a 40-37 advantage.

Port Allegany got a contested 3-pointer at the horn but it wasn’t to be.

Tori Newton recorded the first double-double of her young career with 15 points and 18 rebounds to pace ECC, while Klawuhn added 14 points while hitting four 3-pointers.

HYDE, Pa. – Kassidy Smith and Megan Dumm combined for 47 points to lead visiting Penns Manor to a 59-33 win over Clearfield.

Smith led the Comets with 23 tallies with Dumm contributing 18.

Benson went 6-for-7 from the charity stripe and netted a 3-pointer for the Lady Owls. Raylee Close chipped in six tallies.

BROOKVILLE, Pa. – Aslyn Pry had a monster night with 29 points, 19 rebounds, nine assists, and five blocked shots to lead visiting Moniteau to a 70-49 win over Brookville.

Freshman Catherine Kelly added 17 points, 11 rebounds, and five assists in the victory for the Lady Warriors who also got 12 points from Camryn Fallen.

Liz Wonderling and Alayna Haight each scored 19 points for Brookville.

CURWENSVILLE, Pa. – Skylar Pentz had 12 points to lead Curwensville to a 32-25 victory over visiting West Branch.

Sarah Betts had 10 tallies to pace the Lady Warriors in the loss.

RIMERSBURG, Pa. – Holding visiting Cranberry to two first-half points, Union picked up its first win of the season, 40-11, over the Berries.

Dominika Logue, despite not scoring in the first quarter, paced Union with 14 points with Keira Croyle adding 10.

Freshman Luke Cramer chipped in 16 points and Micah Rupp added 14 points and eight rebounds for the Gremlins who also got 10 points from Chase Beighley and nine from Cole Sherwin.

RIMERSBURG, Pa. – Caden Rainey and Karter Vogle combined for 31 points to help Union to a 47-24 win over visiting Cranberry.

Rainey scored a game-high 18 points for the Golden Knights with Vogle adding 13 points. Brock Jordan chipped in eight points in the win.

Ashton Weaver scored 11 points to lead Cranberry with all 11 coming in the fourth quarter when he hit three 3-pointers and scored 11 of the Berries 12 points in the quarter.

Ryan Jewart knocked down three 3-pointers in the first quarter and finished with 13 points for the Warriors while Mason Marshimer chipped in 11 tallies.

Eli Lingenfelter had nine points for the Dragons while Lleyton Kling and Hunter Klotz each tallied eight.

OIL CITY, Pa. – Keystone had 11 different players scored led by 12 points from Bret Wingard in a 60-40 win at Venango Catholic.

STRATTANVILLE, Pa. – Hunter Craddock scored 12 of his game-high 24 points in the third quarter to help visiting Clarion pull away from rival Clarion-Limestone, 58-38.

The Bobcats, who trailed 16-11 at the end of the first quarter, found themselves ahead seven, 30-23, at halftime after outscoring the Lions 19-7 in the second quarter behind eight Cal German points.

Then Craddock, who had a double-double with 13 rebounds, took over helping to advance the lead to double digits, 44-39, by the end of the third quarter.

German added 14 points, only two after halftime on a pair of free throws for Clarion, and finished off a double-double with 11 rebounds while also handing out five assists, and coming away with five steals.

OIL CITY, Pa. – Outscoring Oil City by 12 points in the second half, Brookville erased a two-point halftime deficit to gain a 57-47 win over the Oilers.

Brookville, which led 21-14 after one quarter of play found itself trailing 27-25 at the break after being outscored 13-4 in the second quarter.

The Raiders, however, regained the momentum after halftime with Jace Miner scoring eight of his game-high 17 points after the break to lead the comeback.

Danny Lauer and Hunter Geer each added 10 points in the win for Brookville.

Isaiah Aeschbacher paced Oil City with 15 points, including seven in the second quarter and 11 in the first half with Judias Johnson adding 11 points for the Oilers.