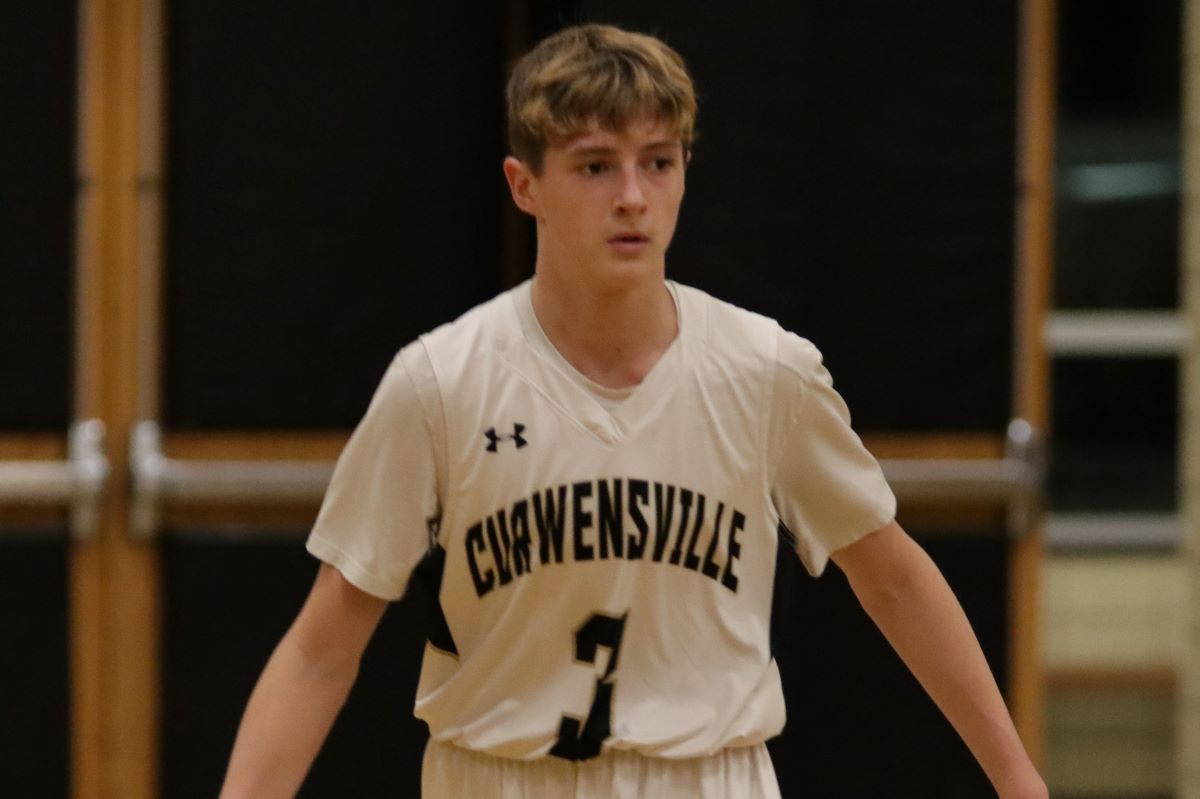 Ty Terry became the first Curwensville player since 2000 to score 40 points in a game when he scored 40 Wednesday. Photo by Jared Bakaysa of JB Graphics. See more of Bakaysa's work here

HOUTZDALE, Pa. – Ty Terry exploded for 40 points while hitting 15 shots, including nine 3-pointers, to lead visiting Curwensville to a 69-47 win over Moshannon Valley.

Terry hit three 3-pointers in the first quarter alone while scoring 13 points in the quarter to help the Golden Tide to a 22-8 lead after eight minutes.

Continuing his hot shooting, Terry scored 10 more points in the second quarter helping the Tide to 36-27.

Terry is the first Curwensville boys’ player to score at least 40 points in a game since Adam Donahue scored 41 during the 1999-2000 season. He is also the first Golden Tide to reach 30 points in seven years. Brett Gardner scored 30 Dec. 10, 2013.

Despite playing just three quarters – Clarion had the Mercy Rule rolling by late in the third quarter – Cal German led the Bobcats with 15 points, while Beau Verdill and Hunter Craddock each scored 14 points and Christian Simko 10.

Watch Verdill hit a 3-pointer early in the game

Verdill finished off a double-double with 11 rebounds, while German had nine assists and six rebounds.

Verdill talked about the win

KNOX, Pa. – Colin Say scored five of his game-high 19 points in overtime, as Keystone beat visiting Clarion-Limestone, 60-54, in a rematch of last year’s KSAC Title game won by the Panthers.

Keystone trailed by three, 38-35, going to the fourth quarter but came back and tied the game, 50-50, by the end of regulation. Strong free-throw shooting helped with Keystone going 9 of 10 from the line in the fourth quarter including Gavin Houge hitting five of six in the quarter for all five of his points.

Bret Wingard added 18 points for Keystone, including six in the fourth quarter, while Pierce had seven.

Keystone started fast and led 17-10 at the end of the first quarter with Wingard hitting a pair of threes and scoring eight points.

C-L came back in the second quarter and outscored the Panthers 18-8 to take a 28-25 halftime lead behind six points from Klingensmith and five each from smith and Callen.

Kyle Pry also had a double-double with 15 points and 10 rebounds and also chipped in seven assists, while Nathan Kelly added 11 points and Ryan Jewart 10 points.

MILL HALL, Pa. – Jordin Sommers scored 16 points to help DuBois get back on the winning track with a 58-44 win at Central Mountain.

HYDE, Pa. – Cole Miller hit six 3-pointers on his way to 22 points to lead Clearfield to a 61-48 win over visiting Westmont Hilltop.

HOMER CITY, Pa. — Brookville turned an 11-point halftime lead into a 32-point blowout after limiting Homer-Center to six points in the second half in a 61-29 victory.

Playing the first time since Jan. 8 due to COVID-19 quarantine restrictions, the Raiders ran away from the host Wildcats with a 21-4 third-quarter advantage.

TITUSVILLE, Pa. – Tyler Hepinger scored 20 points and seven steals and Connor Finch recorded a double-double with 12 points and 10 rebounds to help Sheffield go to 2-0 on the season with a 62-36 win at Titusville.

Robert VanWormer hit four 3-pointers on his way to an 18-point effort for the Oilers, while Isaiah Aeschbacher added 10 and Cameron VanWormer eight.

Selena Buttery had a double-double with 18 points and 12 boards for the Lady Rovers, who jumped out to a 30-14 halftime advantage.

Madelyn Schmader had nine rebounds and five steals for Brockway.

Sarah Chambers scored five of her 16 points in the fourth for Coudersport. Sierra Myers added eight points for the Lady Falcons

Katie Sheeler scored 15 of her 19 points in the second half for O-E, which also got big 3-pointers from Kayley Heller and Morgan Dalton in the fourth. Heller finished with 11 points.

Hailey Hilfiger scored five of her 11 points in the fourth, while Kaelee Bresslin and Mallory McKimm had six points each. Hilfiger pulled down 13 rebounds and also had five steals and two assists.

CURWENSVILLE, Pa. – Alyssa Bakaysa scored 20 points, 16 of which came in the second half, as Curwensville topped Moshannon Valley, 48-32.

Trailing 22-20 at halftime, Curwensville went on a 14-3 run in the third quarter to take control.

Skylar Pentz chipped in 12 points for the Golden Tide.

HOMER CITY, Pa. — Macy Sardone and Marlee Kochman scored 15 and 13 points to lead host Homer-Center to a 65-24 win over Brookville.

Jan. 20, 2021 D10 Hoops: Corry Boys Win In Overtime; Maplewood Girls Roll
District 9 and District 10 Basketball and Wrestling Schedule for Jan. 21, 2021
We use cookies on our website to give you the most relevant experience by remembering your preferences and repeat visits. By clicking “Accept All”, you consent to the use of ALL the cookies. However, you may visit "Cookie Settings" to provide a controlled consent.
Cookie SettingsAccept All
Manage consent