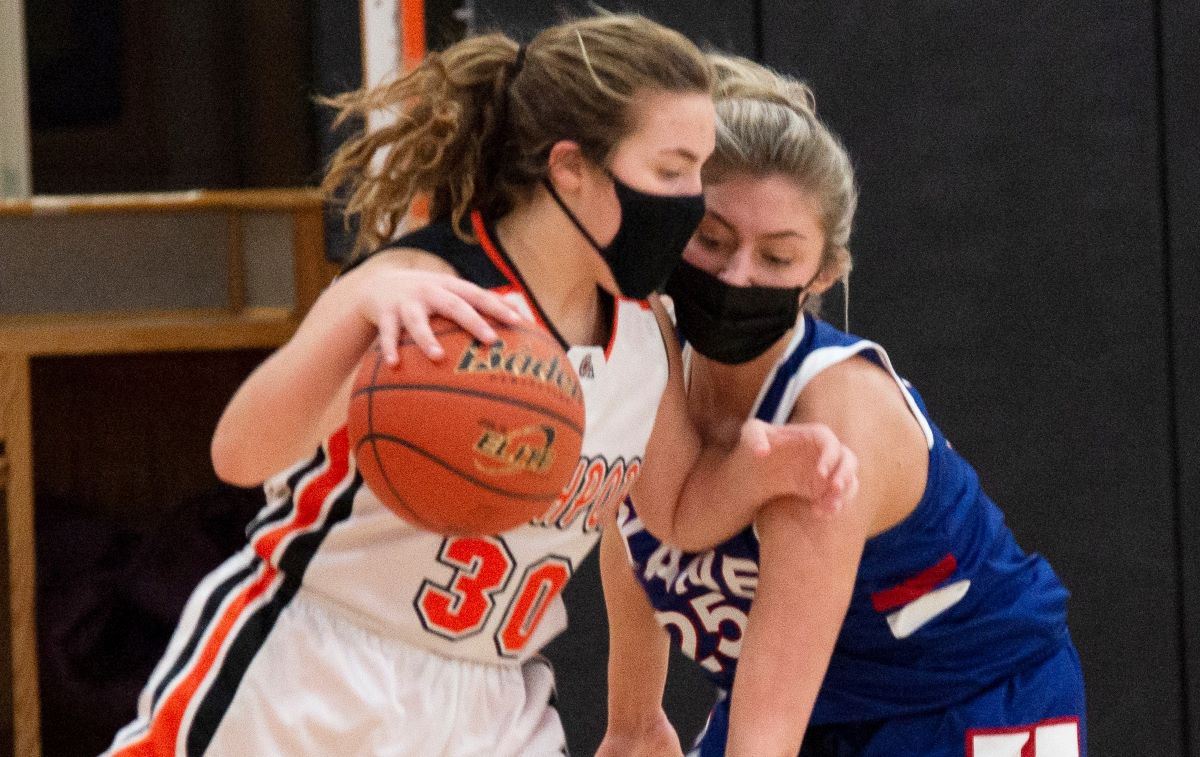 Audri Marconi had four of her game-high 12 points in the extra session while Madi Koza added three points in overtime on her way to five tallies. Sadie Walter also scored six points for the Lady Wolves.

RIMERSBURG, Pa. – Up six with just over 25 seconds to play, Clarion held off a late Union rally to hang on for a 36-35 road win.

Clarion then got called for a five-second violation giving the ball back to Union.

But Kriebel missed a 3-pointer, and Jordan Best grabbed the rebound for Clarion. Best then made one of two free throws with 19.8 seconds left to make it 35-30.

Dominika Logue, though, answered with a 3-pointer for Union to make it 35-33 with 11.4 seconds to play before Payton Simko hit the second of a two-shot foul with 9.6 seconds left.

But Hailey Theuret hit a 2-pointer with one second left to set the final score.

Best paced Clarion with 13 points with Erica Selfridge chipping in 11 and Simko seven.

ULYSSES, Pa. – Kaci Stelene recorded a double-double with 16 points and 12 rebounds to lead visiting Johnsonburg to a 32-26 win over Northern Potter.

Freshman Catherine Kelly added 12 points for the Lady Warriors who also got 10 tallies from Zoey Hillwig.

COUDERSPORT, Pa. – Sarah Chambers returned from an injury in a big way knocking down 15 shots on her way to a 33-point night in a 69-12 Coudersport win over Austin.

Chambers scored 25 first-half points including 15 in the second quarter for the Lady Falcons.

BRADFORD, Pa. – Katie Sheeler hit three 3-pointers on her way to a team-high 17 points to pace a 53-24 road win for Otto-Eldred at Bradford.

Bri Heller chipped in 10 points and five rebounds for the Lady Terrors who also got seven points, seven rebounds, and five steals from Reilly Raught.

DUBOIS, Pa. – Olivia Johnson scored six of her 12 points in the first quarter to help DuBois to a strong start on its way to a 63-27 win over visiting Clearfield.

Behind Johnson, the Lady Beavers took a 16-2 lead at the end of the first quarter that expanded to 33-10 at halftime after Saige Weible scored five of her game-high 13 points in the second quarter.

Emma Hipps led Clearfield with eight points while going a perfect 6 of 6 from the free-throw line.

The Lady Panthers led 22-14 at halftime but outscored C-L 28-16 in the second half behind Lauer, including 13-5 in the third quarter when Lauer scored nine points.

Cole Sebastian tied the game at 52 with a pair of free throws late, but Liners hit a free throw with about 20 seconds to play to put Bradford ahead, 53-52. Liners then hit another free throw with one second left to set the final score.

The game was close throughout with Otto-Eldred lead 10-9 at the end of one quarter before Bradford took a 25-22 halftime lead. The Terrors closed within a point, 36-35, going to the fourth quarter.

Dalton Dixon had a game-high 17 points for Bradford with Jarid Wilmoth adding 13.

Braden Maholic led Otto-Eldred with 16 points with Jake Merry adding 14 and Sebastian 10, including eight from the free-throw line where he went 8 of 10.

KARNS CITY, Pa. – Chase Beighley scored a game-high 27 points and Nathan Waltman had a double-double with 12 points and 15 rebounds to lead Karns City to a 66-35 win over visiting Brockway.

Karson Rumsky added 15 points for the Bison who also got 12 apiece from Luke Winters and Matt Pallo.

Ryan Whitehead hit four 3-pointers and scored a game-high 24 points for Philipsburg-Osceola with all of his points coming from the second quarter on.

Jan. 19, 2021 D10 Hoops: Cambridge Springs, Fairview Among Boys Winners On Busy Night
District 9 and District 10 Basketball and Wrestling Schedule for Jan. 20, 2021
We use cookies on our website to give you the most relevant experience by remembering your preferences and repeat visits. By clicking “Accept All”, you consent to the use of ALL the cookies. However, you may visit "Cookie Settings" to provide a controlled consent.
Cookie SettingsAccept All
Manage consent