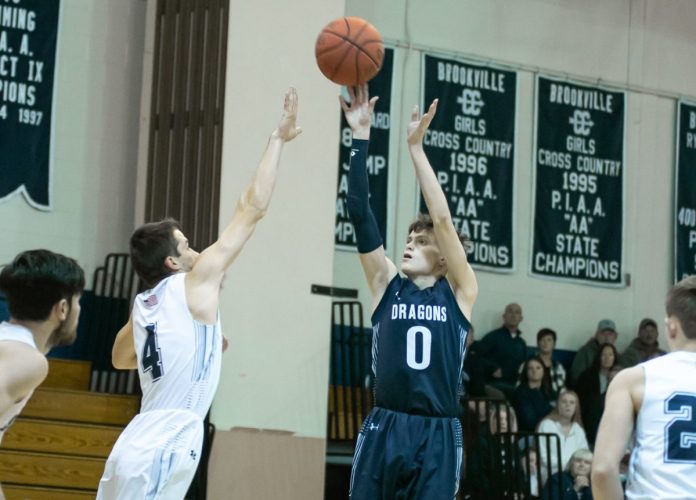 HARBORCREEK, Pa. – In a battle of two of the top teams in Region 5, Parks Ordiway scored 13 points as Warren’s defense stifled Harbor Creek in a 51-35 road win.

Ordiway scored nine of his points in the first half as the Dragons built a 28-18 halftime advantage.

Warren got balanced scoring across the board, as Tommy Nyquist was also in double figures with 10 points and J.T. Blum and Owen Becker tallied eight each.

Jaden Rocco scored eight of his team-high 12 points in the second half for Harbor Creek, including 6-of-6 from the free-throw line. Brady Rzadkiewicz had six points and Nick Krahe five for the Huskies.

CAMBRIDGE SPRINGS, Pa. – In a battle for first place in Region 2, Nathan Held scored 22 points to help Cambridge Springs to a 64-59 win over Cochranton.

The Blue Devils led by 11, 40-29 going into the fourth quarter and withstood a Cochranton rally in the fourth that saw the Cardinals score 30 points over the final eight minutes.

RUSSELL, Pa. – Eisenhower went on a 17-4 second-half run to break open a tight battle with Union City in what was ultimately a 66-57 Region 2 victory for the host Knights.

With the score tied at 37-all, a Curt Darling three spearheaded the surge that began with 2:11 to go in the third quarter. Darling, who finished with a game-high 25 points, hit two threes in the run, and Wyatt Loookenhouse, who finished with 23 points, had seven points in the decisive spurt.

Darling talked about the win afterward:

Eisenhower actually jumped out to a 15-0 lead to start the game, but Union City, playing with a short bench, rallied, cutting the margin to six, 18-12 at the end of the first quarter.

The Bears never led in the game, but twice tied it, including right before the half at 26-26 before a Kyler black free-throw gave Eisenhower a one-point lead at the break.

The Bears cut the margin to six, 63-57, with 40 seconds to go, but Black, who finished with nine points, knocked down a pair of free throws to help ice it.

SLIPPERY ROCK, Pa. – Damon Curry scored 20 points as Franklin powered past Slippery Rock for a 64-45 win to stay atop the Region 4 standings.

GREENVILLE, Pa. – Greenville rallied from a 12-point first-quarter deficit for a 65-60 win over Sharpsville.

Jalen Ritzert and Logan Lentz led the charge for the Trojans, scoring 23 and 22 points, respectively. Ritzert scored 17 points in the second half, including five threes.

The Trojans outscored the Blue Devils 22-7 in the second quarter to take a 28-25 halftime lead.

Omar Stewart led the way for Farrell, scoring a game-high 20 points, including seven in the decisive fourth quarter.

Malachi Owens had 12 points for the Steelers, while Lamont Samuels and Allen Michael-Jackson had eight points apiece.

Corry led 38-31 when Conneaut’s Alex Nottingham made a three with 15 seconds left to cut the margin to four. After the Beavers missed a front end of a one-and-one, Nottingham drilled another three, but it was as time expired.

Logan Joncas finished with 10 points for Corry, while Nottingham led Conneaut with 13 and Rayge Mitchell eight.

With the win, the Tigers improved to 3-0 in Region 5 along with Warren, while Oil City is 2-0 in region play.

James Sitter connected for 22 points for the Tigers, while Logan Frazao had 15, Tyler Shultz 14, and Archie Murphey nine.

The Oilers trailed 29-23 at halftime but took the lead with a 20-9 spurt in the third quarter.

Ronan Dorler had 18 points and Dom Russo 15 for Fort LeBoeuf.

Up seven at halftime, Hickory outscored the Bulldogs 19-12 in the third quarter to take a double-digit lead.

Joey Fazzone finished with 16 points for the Hornets and Jackson Pryts and Tyson Djakovich 12 each.

Logan Kibbe added 17 points in the win for the Bobcats, while Lucas Rupp and Bobby Yost tallied nine each.

Danny Bruce led GM with 16 points, while Jeremiah Schreiber had 14.

SHARON, Pa. – Sharon outscored Wilmington 13-2 in the fourth quarter to pick up its first win of the season, 37-36.

Santino Piccirilli had nine points and Joe Messina eight for the Tigers.

Tuff Mcconahy had 10 points and Damien Micco eight for Wilmington.

A total of eight different Tigers made their way into the scoring column, with Hope Garrity adding nine points and Sara Gennuso and Jenn Hunter eight each.

Josie Lewis had 18 points and Grace Cano 10 for Greenville.