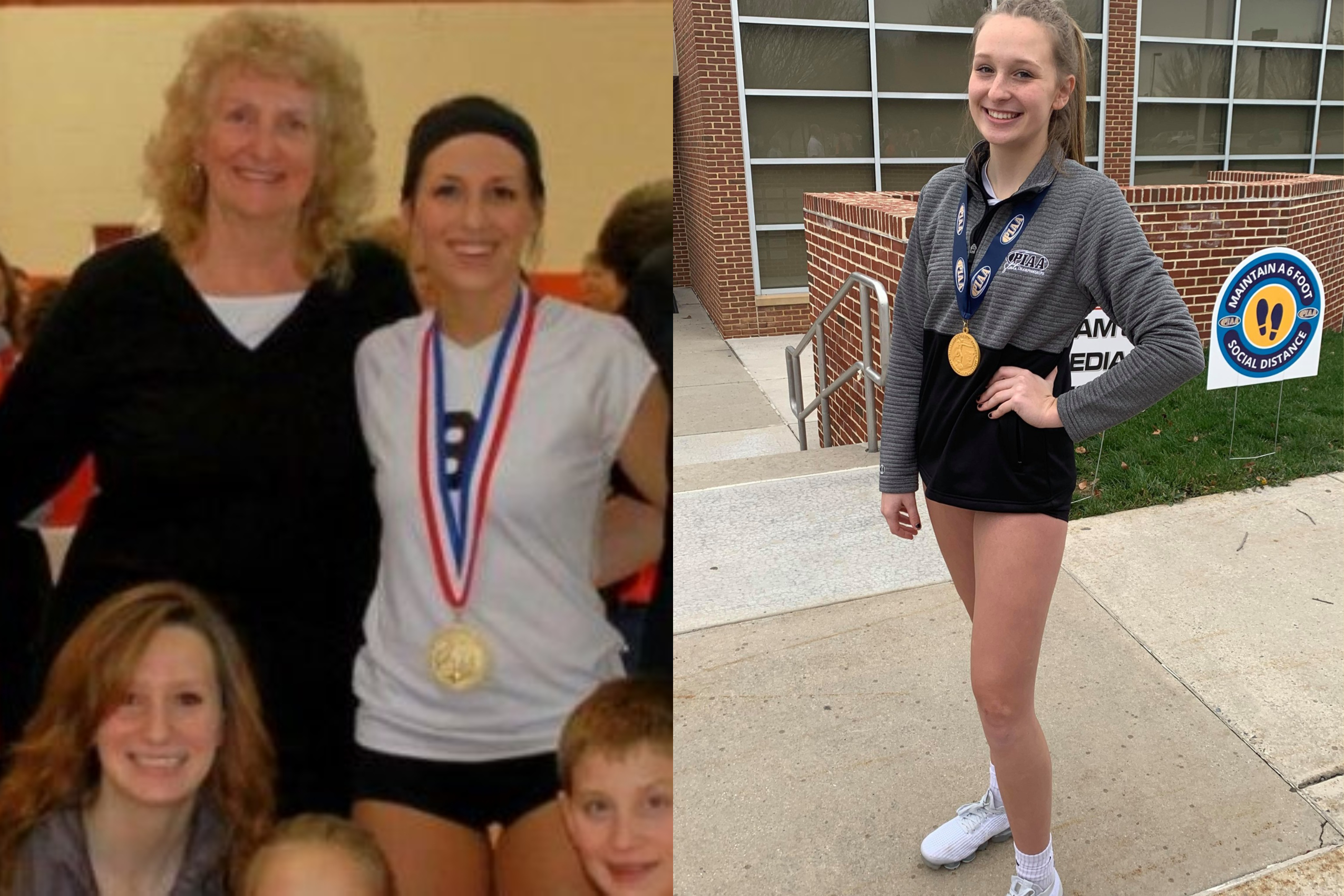 Ellie Burns (with her grandmother Pezek) on left and Korrin Burns on right after winning their PIAA Championships as players.

SHIPPENVILLE, Pa. – It is just a rumor that the Burns girls were all born with a volleyball in their hands.

But you can hardly blame anyone for believing that.

Mom, Jodi, after all, is a Clarion University Hall of Fame volleyball player who earned first-team AVCA ALl-Region honors in 1989 and 1990 and graduated with four-season and six-career records. She went on to coach the Golden Eagles on two separate occasions.

And it wasn’t just college success that Jodi, whose maiden name is Pezek, experienced.

She won a pair of WPIAL and a pair of PIAA titles while at Norwin High School in the 1980s, the start of what has become a volleyball dynasty.

And then there is the state hardware. Jodi’s two PIAA titles as a player are added to Ellie’s one PIAA championship in 2012 with Clarion High School, and Korrin’s 2020 title. Ellie also has one as an assistant coach for North Allegheny last season when she joined her sister giving the Burns double gold on the same day.

And they get to try for double gold again Saturday.

Clarion, helped by Korrin, is going for back-to-back titles when they face Sacred Heart at 10:30 a.m. at Cumberland Valley High School. A few hours later, Ellie, whose last name is now Proksell, will again be on the bench as North Allegheny tries to defend its title when it takes on Parkland at 6 p.m.

Korrin is very well aware of the family history, especially the number of state titles her mom won.

“Actually, I have been thinking about that,” Korrin Burns said after Clarion’s 3-0 semifinal win over Bishop Canevin Tuesday. “We are a pretty competitive family. So, it will feel pretty good when I tie her up, hopefully.”

Korrin has been a big part of Clarion’s runs the last two seasons.

This year, Korrin, who is headed to NCAA Division I St. Francis (she will be the fourth Burns girl to play college volleyball as Karly played at Mercyhurst, Ellie at Pitt and IUP, and Olivia at IUP), is one of the top hitters in Pennsylvania and currently ranks sixth in the Commonwealth with 6.9 kills per set, according to MaxPreps.com while adding 2.3 digs per set and leading the team with 51 aces.

She has 1,611 career kills, 702 career digs, and 204 career aces while helping Clarion to the four District 9 Class 1A titles, a PIAA Class 1A title, this year’s PIAA championship match, and a semifinal berth as a sophomore in 2019.

Korrin is coming off a match for the ages in the semifinal win over Bishop Canevin when she left almost everyone speechless with 33 kills, and she is the reason the Lady Cats are favored to win Saturday’s championship match.

“She wants something and is going after it and demanding that she perform at that higher level,” Clarion head coach Shari Campbell said. “You just see her game getting better, and she is contacting the ball at such a high point.”

No matter what happens Saturday, the Burns family will be talking volleyball on Thanksgiving – and hey maybe the mashed potatoes will be shaped like a volleyball!

Burns Scorches Bishop Canevin for 33 Kills as Clarion Advances to PIAA 1A Title Match for 2nd Straight Year
Preview: Clarion Aims to Defend PIAA Class 1A Crown vs. Sacred Heart Saturday
This website or its third-party tools process personal data.In case of sale of your personal information, you may opt out by using the link Do not sell my personal information.
×
Manage consent