Howling to the Moon: Kane Wolves Never Quit on Way to D9 2A Volleyball Crown 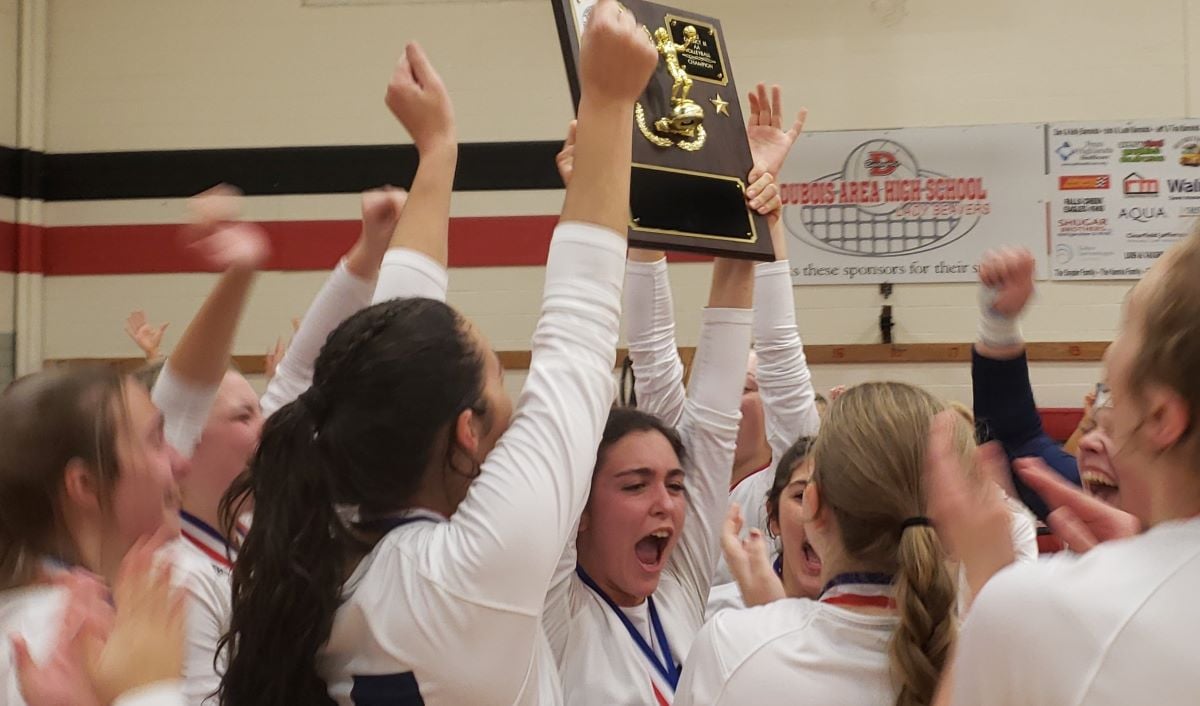 DUBOIS, Pa. – With its back against the wall, Kane just wouldn’t quit.

First down two sets to one and then down 8-5 in the decisive fifth set, the Lady Wolves just kept on fighting.

Oh, there was plenty of opportunity for Kane to pack it in, to say ‘hey, we had a great season and got to this point but it just wasn’t our night’.

That point could have come after the Lady Wolves dropped the second and third sets after taking the first set.

Or that point could have come after Keystone scored five of six points in the fifth set to take a semi-commanding 8-5 lead in a set played to only 15. Or it even could have been when the Lady Panthers went back ahead 11-10 after Kane had fought to take a 10-9 lead in that fifth set.

But in none of those instances did the Lady Wolves ever throw in the towel.

“We had to keep hoping we would get back up again and encourage each other not to quit,” junior outside hitter Maya Smith, who had three key kills in the fifth set, said. “It’s a game to five for a reason.”

At perhaps the season’s most critical juncture a timeout by Kessler helped potentially save Kane’s season.

After Leah Exley rocketed one of her 19 kills on the night to give Keystone an 8-5 lead in the fifth set, Kessler had seen enough and asked for the break.

During the timeout, she reminded her team to play their game while also talking some strategy.

“We saw a hole we thought we could exploit, and they hit it,” Kessler said. “We look for things like that. That is why I have that big coaching staff. I do not do this on my own. It is impossible. There are too many components, too many cogs and wheels turning at the same time. We just talked about ‘you go out and play your game’. This is what they have been in the gym since June for. You know, to get to this point.”

Kane responded to the message with three straight points thanks to kills from Cora Jekielek and Mia Anderson and an Anderson block to tie the set at 8-all.

Another kill by Exley, she had five in the fifth set alone, gave Keystone the lead at 9-8.

But a service error by Natalie Bowser was followed by a Smith kill put Kane ahead 10-9.

Keystone, though, got another Exley kill and then took advantage of a hitting mistake by the Lady Wolves to take one final lead at 11-10.

That’s when Anderson’s kill attempt went to Reagan Mays but Mays’ pass went into the net to tie the set at 11.

Karely Callender, who had a strong night with nine kills, then had her hit attempt go into the net giving Kane a 12-11 lead.

A long rally then went Keystone’s way with Bowser picking up her ninth kill to go with four blocks to make it 14-12.

But on its second championship point, Kane put the title into the record books on a kill from Blankenship, who finished with a team-best 13 on the night.

“It feels really good,” Blankenship said. “We have been working really hard for this.”

On a night where things were as tight as could be – Kane outscored Keystone 106-99 in five sets – the Lady Wolves took advantage of miscues by the Lady Panthers to withstand a night that saw Keystone record 51 kills and Kane just 36.

But strong defense from Kane – the Lady Wolves had 54 digs led by 14 from Jekielek, 13 from Smith, and 12 from Costanzo – forced Keystone to continue playing through long rallies leading to 30 hitting errors on the Lady Panthers. That coupled with 14 service errors and 14 errors of other varieties helped Kane score 68 points.

“We watched a lot of film,” Kessler said. “We essentially tried to pull their weaknesses and see where we could exploit. They (Keystone) are dang good. They have one of the best setters I have seen this year. They have nice outside hitters, nice middle hitters. We just kind of played our game tweaking some things to try to exploit their weakness. We just kind of studied and played the best we could with the way these girls can play.”

Kessler praised the defensive effort her team gave, especially in the final two sets when the Lady Wolves recorded nearly half their 54 digs with 28, including 26 in the crucial fourth set.
“They have learned to read the hitters fairly well,” Kessler said. “I have one of the best defensive coaches in all of Pennsylvania in Rae El Whitman and Michelle Costanzo, both. Our defense, we do a lot of channeling. We try to block but you are not always going to block somebody. So we make sure we are in the seams and we are off the shoulder off the outside blocker. We play our left front depending on where the people we are playing against put the ball. They are so dedicated to playing defense. They play it hard. They practice it hard.”

Smith added eight kills to her 13 digs and also had two aces, while Jekielek and Anderson each added five kills. Anderson also had four blocks.

Smith made sure to credit the Kane crowd, which included a great student section, for being part of the victory.

Kennedy Kaye led a strong defensive effort for Keystone with 21 digs, as the Lady Panthers actually out dug Kane, 58-54.

Bowser had 21 set assists for the Lady Panthers.

Kane will face the third-place team out of the WPIAL – either Avonworth or Quaker Valley – in the opening round of the PIAA playoffs Tuesday at most likely Kane High School.

“We cut this up into three seasons,” Kessler said. “Season one we were 14-2. Season two was our game against Cranberry (in the semifinals). We were 1-0. This was season three, and I said you have one game to make or break you. That was just their mentality. We only have one shot at it.”

Karns City Rallies Past ECC to Claim D9 Class 1A Boys Soccer Title
Nov. 3, 2022 Volleyball and Soccer Schedule
This website or its third-party tools process personal data.In case of sale of your personal information, you may opt out by using the link Do not sell my personal information.
×
Manage consent