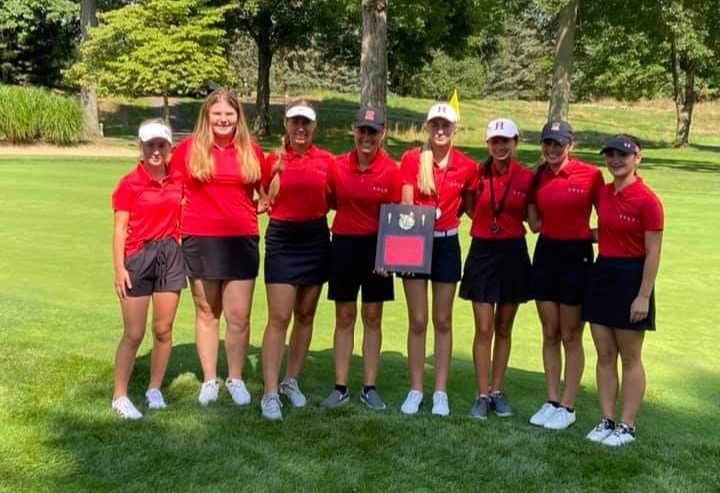 North East’s Lydia Swan shot a 69 to earn medalist honors, while the Pickers’ Anna Swan carded a 70. For Hickory, Sasha Petrochko had a 72 and McKenzie Gustas a 77. Hickory’s Luciana Masters had an 80 to help tilt the team score in the Hornets’ favor.

McDowell’s Zoe McClain and Villa’s Anna Zinram had the other sub-80 scores, shooting 74 and 78 respectively, while Grove City’s Emily Donahue was next with an 84.

McDowell finished third in the team standings at 250.

TRANSFER, Pa. – Jamestown’s Aidan Swezey, Lakeview’s Adam Snyder and Mercer’s Eli Ellison tied for first place, each shooting an 86, but it was a balanced Greenville effort that led the Trojans to first-place in the team standings in the season’s first Region 1 mega match at Shenango Lake.

The Trojans got an 88 from Nate Stuyvesant, an 89 from Brandon Stubert and a 92 from Kaleb Porter en route to the win.

Lakeview’s Owen Dye carded the other sub-90 score with an 89.

Nate James finished second overall, carding an 82 for the Beavers. Kasen Neely of Titusville was third with an 84.

Clearfield’s Ryan Gearhart and Brookville’s Killian Radel each shot a 44 to tie for the low round, while Clearfield’s Eric Fletcher had a 45.

DISTRICT 10 REGION 5
WATERFORD, Pa. – Mercyhurst Prep’s Nick Momeyer had the low round with a 77, but it was Fort LeBoeuf that took first in the Region 5 opener at Mound Grove Golf Course.

Nathan Feltmeyer fired an 81 for the Bison, while teammate Jamie Miller finished right behind him with an 82.

Fairview’s Will Fessler shot an 83.

2021 District 10 Football Preview Video – McDowell Trojans
2021 District 10 Football Preview Video – Cambridge Springs Blue Devils
We use cookies on our website to give you the most relevant experience by remembering your preferences and repeat visits. By clicking “Accept All”, you consent to the use of ALL the cookies. However, you may visit "Cookie Settings" to provide a controlled consent.
Cookie SettingsAccept All
Manage consent