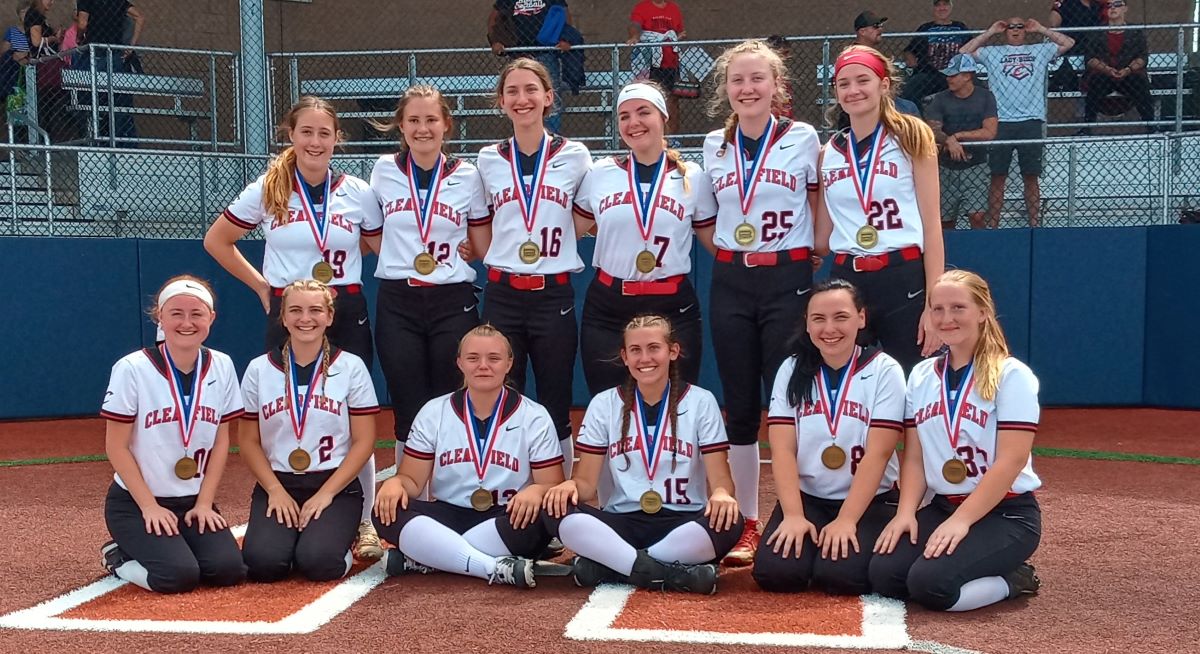 DUBOIS, Pa. – For Clearfield softball battery mates Oliva Bender and Emma Hipps, getting back into the PIAA playoffs was a goal from day one.

And the two made sure that goal became a reality leading Clearfield to a 10-0, six-inning win over Somerset in the District 5/9 Class 4A subregional championship game Tuesday afternoon at Heindl Field in DuBois.

“We are just really excited,” Bender, the junior catcher said. “Since we got so far our freshman year (the Lady Bison advanced to the PIAA 3A semifinals in 2019 before the COVID-19 pandemic kept the season from happening in 2020), we know the potential we had. We just wanted to keep going with what we had shown before.”

Hipps was at her best coming just a fifth-inning error by shortstop Alana Fedder from throwing a perfect game. She “settled” for a no-hitter striking out 14, including each of the first 10 batters she faced and 12 of the first 13.

In fact, Hipps needed only one pitch to shut down the Eagles, a fastball.

“My fastball again,” Hipps answered when asked what was working so well for her. “I threw one changeup and that was it.”

Hipps, who has given up two hits and one run while striking out 25 in 13 innings of playoff pitching, said she has ramped up the intensity level in the postseason.

“Yes,” a modest Hipps said when asked if she had gotten stronger and more intense since the playoffs started.

It wasn’t just pitching that got the Lady Bison (15-5) back to the PIAA postseason.

Clearfield’s bats knocked out 13 hits, including home runs from Bender and Hipps.

Bender’s home run came in the bottom of the first after Lauren Ressler’s line drive with two outs was dropped by Somerset shortstop Paige Housley. It was a two-run shot over the left-field wall.

“I was it coming in,” Bender said of the pitch she hit over the fence. “I was feeling it, and I waited back n it because I knew she was slower, and I struggle with that. But, I could just feel it once I hit it.”

Bender described the feeling of hitting a home run.

“You get so excited because you see (Coach) Funk down at first base, he is all excited,” Bender said. “Then, you come around the corner and Danver (manager Derek Danver) is just smiling at you, and the whole team comes out. I just feel like it gives everyone energy.”

Hipps’ home run came with one out in the third on a two-strike pitch that she was just trying to put in play giving Clearfield a 4-0 lead.

“I had two strikes, so I was just battling, trying to put the ball in play,” Hipps said. “When it came off the bat, I knew it was gone. And I was ooh, I am just like Liv. It was great.”

Watch the full postgame interview with Hipps and Bender

Up 4-0 with the way Hipps was pitching, Clearfield didn’t need any more runs.

But the Lady Bison got them anyhow scoring five times in the fourth inning with the big hit being a bases-loaded, bases-clearing double to right-center by Ressler after Somerset walked Hipps intentionally to load the bases. That double put Clearfield ahead, 9-0.

Earlier in the inning, Moran Cheek hit a ground-rule double to left that bounced over the short fence in foul territory after hitting in fair territory to score the first two runs of the inning.

Clearfield had a chance to end the game in the fifth when it put runners on second and third with no outs, but in one of the few bright spots for Somerset on the day, Makena Sheeler pitched her way out of the jam by getting Cheek to pop out in foul territory to first baseman Mary Bowers before striking out Kylie Hertlein and Ruby Singleton to end the threat.

But it just delayed the inevitable, as Clearfield put runners on the corners with one out in the sixth before winning the game on Fedder’s single to deep shortstop.

Sheeler took the loss going 5 ⅓ innings allowing 10 runs, six earned, on 13 hits and a walk while striking out two.

Clearfield will face the second-place team out of the WPIAL, either Highlands or Beaver, in the opening round of the PIAA playoffs, Monday, June 7, at a District 9 site.