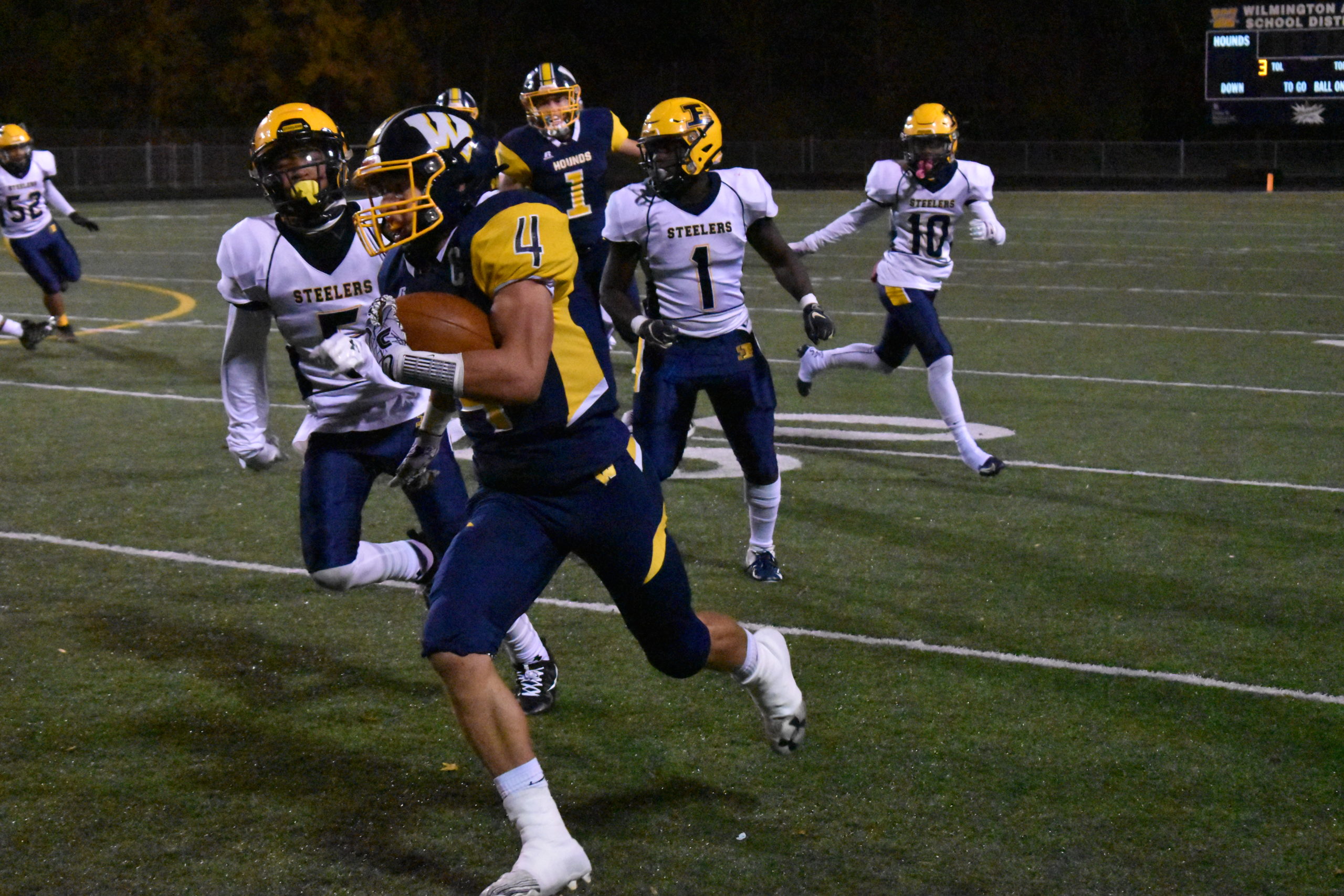 The Wilmington Greyhounds captured their fifth consecutive District 10 title, beating Farrell for the third time this season, 19-14 in the 2A championship game on Saturday.

“I have been blessed to be a part of this school, this community.” said third-year Wilmington head coach Brandon Phillian. “Now, leading this program that was built by Terry Verrelli, you try and capture what it means to win five consecutive District 10 championships and I think the word that comes to mind is blessed. I’m thankful for the blessings and the opportunity.”

Wilimington is your D-10 Class 2A champion! 19-14 over Farrell pic.twitter.com/BsihMhqIUl

The old adage that it’s tough to beat a good team three times in one season certainly proved true for Wilmington (7-0).

The Greyhounds jumped out to a 19-0 lead, but Farrell came storming back, almost all the way.

It’s been a story of almost for the Steelers (5-3) against the Greyhounds this season. The defending Class A state champs, who were bumped up to Class 2A this season, had a late drive thwarted in the final moments in the second regular season meeting.

Ironically, this game played out in similar fashion.

“You see these games, these games can go any way at any time, at any given second,” said Farrell coach Amp Pegues. “Against a good team like this you just can’t have the penalties and turnovers, one of which turned into a touchdown. Given both the penalties and the turnovers, we still had a shot to win it. I’m proud of my kids. They played their hearts out.”

With 5:50 to go, Wilmington had a fourth-and-goal, holding that 19-14 lead and looking to put the game away.

That didn’t happen, however, as the Steelers stuffed Wilmington quarterback Calean Bender behind the line of scrimmage to take over on downs.

The change in momentum was palpable.

After a quarterback sneak by Christian Hartley to get a couple yards, the quarterback scrambled for a first down.

A pair of Anthony Stallworth runs and another 11-yard scamper by Hartley and the Steelers were out to the 41-yard line.

Maybe, just maybe, this was their time.

As Pegues alluded to, the WIlmington defense had other ideas, forcing a fumble that appeared to be caused by Morgan Whiting and was recovered by Elon Horchler with 2:28 to play, sealing the D-10 title for the Greyhounds.

“Morgan Whiting, he’s our motor guy,” Phillian said. “That motor cranked tonight, it was running at full throttle. Morgan seems to play his best football in the playoffs and I think he certainly did that here tonight.”

It was certainly hard to imagine when it was 19-0 that the game would come down to a defensive stop.

Wilmington was clicking on all cylinders early, as Luke Edwards put the finishing touches on a 10-play, 70 yards drive that chewed up over six minutes of clock with a 4-yard touchdown run at the 2:29 mark of the first quarter.

Just three plays later, Farrell’s Trian Holden dropped back on third-and-10, but Mason Reed stepped in front of his pass and returned it to the house, and it was 13-0 in the blink of an eye.

“That pick six that Mason Reed had was a game defining play,” said Phillian. “That gave us all the momentum in the world in the first half. Mason watches a lot of film, is a student of the game, and I think it showed on that play.”

The Greyhound defense continued to bottle up the Steelers and star running back Anthony Stallworth, forcing a three-and-out on the ensuing drive, setting themselves up with great field position at the 50.

Moments later it was 19-0, as Bender hit Ethan Susen for an 11-yard touchdown.

It seemed as if Wilmington had delivered an early knock-out punch.

But the Steelers countered.

They responded with a 16-play, 80-yard drive  that was capped off by a brilliant one-handed catch from Omar Stewart Jr. in the corner of the end zone on a Hartley pass with 1:50 to go in the half.

The difference from going into the locker down 19-6 as opposed to 19-0 was huge, and both teams knew it.

“The way that I felt coming into this game, it felt almost no different than 2018 getting ready for Southern Columbia,” Phillian said. “It felt like a state championship, that magnitude. Three times, two good football teams, two proud programs.”

Susen finished with 167 yards on the ground and Darren Miller 69 for Wilmington.

Hartley had 70 yards passing and 69 rushing for Farrell. The Wilmington defense limited Stallworth to 33 yards on the ground.

Farrell’s Christian Hartley steps out of bounds after picking up first down yardage.

“Christian Hartley, I’m just so proud of that kid,” Pegues said. “It’s just his second playoff loss. He became a leader. That’s the most important thing is to see these kids grow as young men.

“The stressful part about this year is you don’t know when you might get shut down. To make it to the D-10 championship in our first year in 2A, I’m proud of my team, proud of my seniors. They’ve built this program. Not only are they athletes, most of them are scholars. These kids have a very bright future ahead of them.”

Wilmington, meanwhile, moves on to play District 9 champion Karns City next week. That game will be at Wilmington.

“This is a testament to our players and the hard work they put in every single week,” Phillian said. “They’re prepared to step up.”

Mangiantini, Defense Power Redbank Valley to D-9 Title
Oil Gushing: Oil City Rolls Past Harbor Creek for Third Straight D10 Football Title – This Time in 4A
This website or its third-party tools process personal data.In case of sale of your personal information, you may opt out by using the link Do not sell my personal information.
×
Manage consent