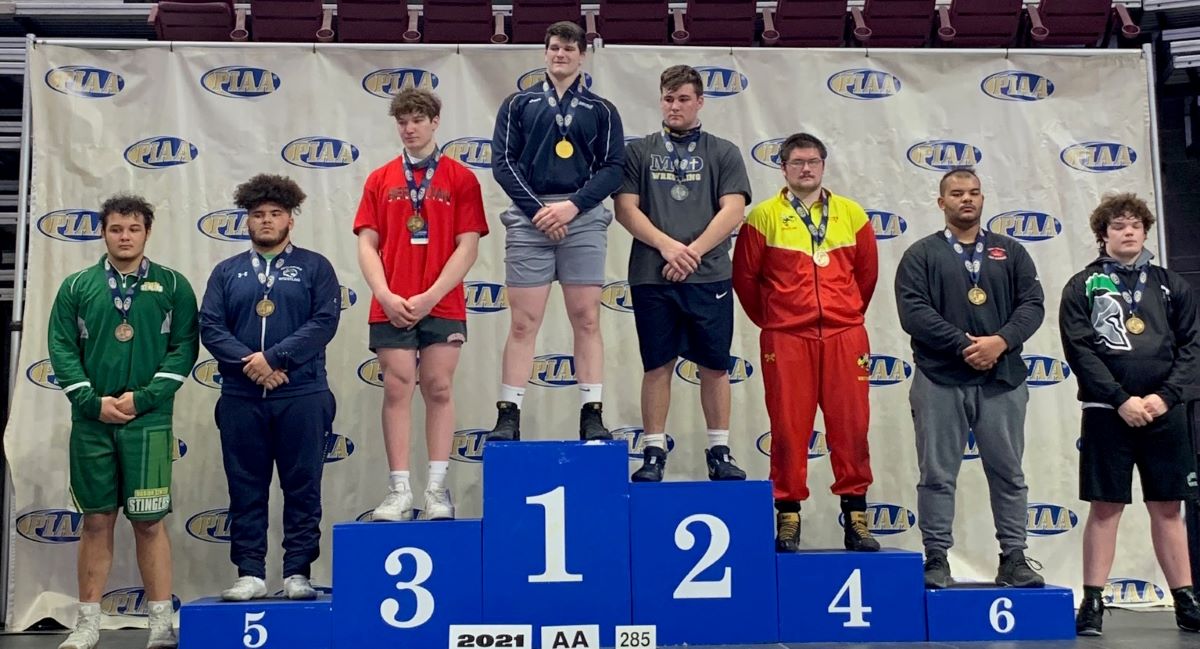 Nathan Taylor on top of the podium at PIAA wrestling. Submitted photo

The freshman Gill won a 6-2 decision over fellow freshman Cooper Hornack of Burrell in the 106-pound final to cap off a 30-5 season. He’s the fifth Hornet to win a state title and first since Kyle Cheza won the 105-pound title way back in 1987.

Gill’s championship finished off a strong postseason for Hickory, which had three other top-eight medalists with Connor Saylor’s sixth-place finish at 126, Carter Gill’s seventh at 145 and Justin O’Neill’s eighth at 113.

Hickory’s 27 team points put them ninth in the team standings, just ahead of 10th-place Reynolds which medaled two wrestlers.

Brookville wound up in fifth place, led by Taylor’s run to the heavyweight title. He capped a 3-0 run with a 5-3 decision over Bishop McDevitt’s Riley Robell in the final. A fourth-place medalist at 220 last year, Taylor won Brookville’s third straight heavyweight title. His teammate Colby Whitehill won the last two state championships.

Sheffield’s Ethan Finch was the other D9 or D10 finalist, getting pinned by Montoursville’s Cael Crebs in the second period.

Reynolds’ two-time state champion Gary Steen wound up finishing third at 120 pounds, majoring Brookville’s Reinsel 9-0 in the consolation final. Steen finished his career as a four-time medalist, winning titles as a freshman and junior and finished third as a sophomore.

District 9’s other medal came from Johnsonburg’s Cole Casilio, who was seventh at 160.

A Year in the Making: Keystone Girls Win 2A Title a Year After Finishing Second
D9and10Sports.com Broadcasting D9 Class 2A and 3A Boys’ Championship Games Powered by Laurel Eye Clinic and Potter Co. Campground
This website or its third-party tools process personal data.In case of sale of your personal information, you may opt out by using the link Do not sell my personal information.
×
Manage consent