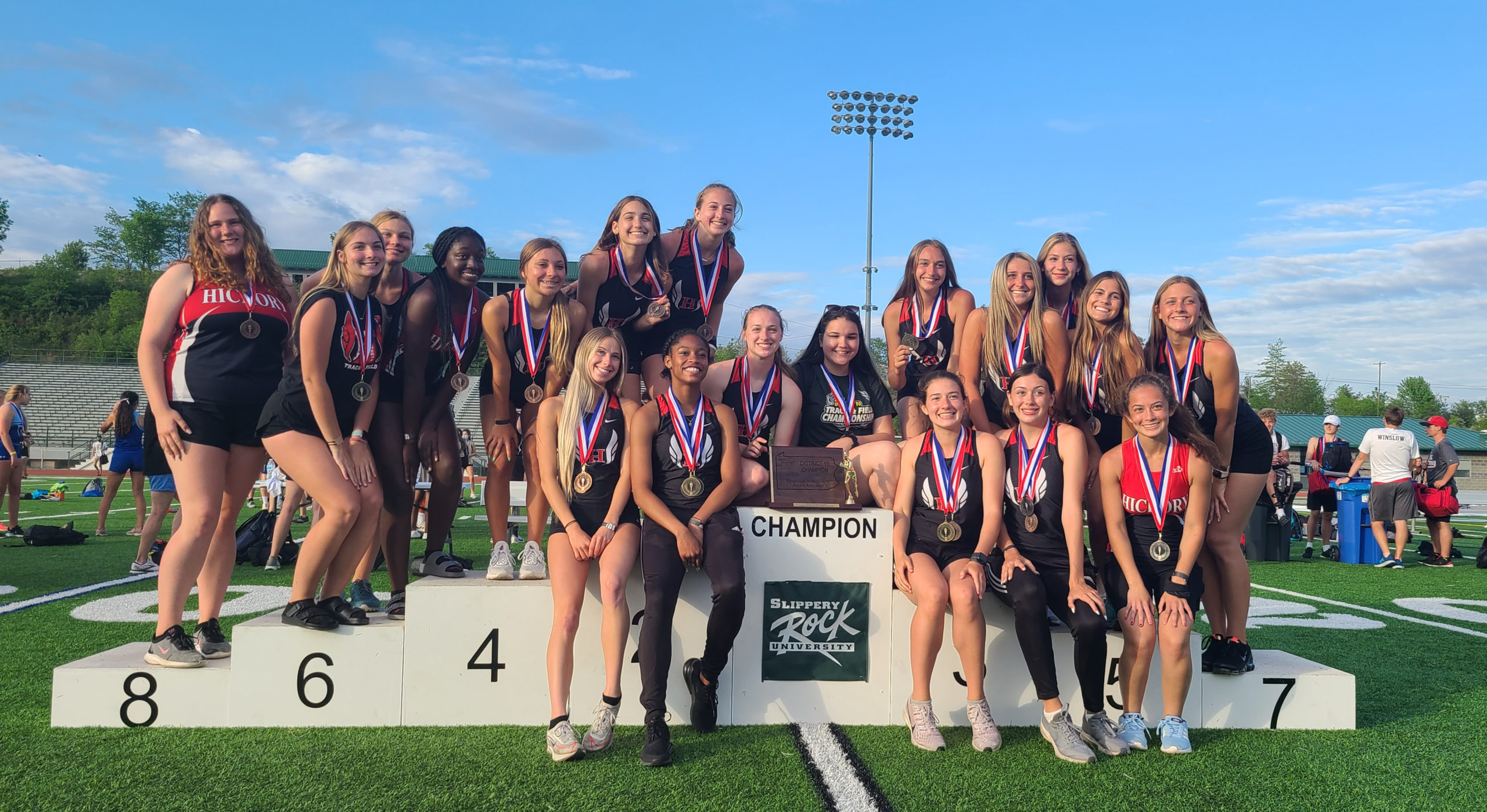 SLIPPERY ROCK, Pa. – The Cathedral Prep Ramblers showed their depth, and the Hickory Lady Hornets did the same, led by senior star Aniyah Anderson en route to the District 10 Class 3A team track and field championships on Saturday at Slippery Rock University.

The Lancers and Trojans, meanwhile, had a pair of record-setting performers, Dylan Throop of GM in the 3200 and McDowell’s Kalli Knott in the pole vault.

“I was planning to run straight 70s, 1:10 each lap,” Throop explained. “I was hitting them one right after another. I was a little bit slow in the sixth lap, but on that last lap I kicked it in and I got it.”

Knott’s title-winning leap in the pole vault of 12-4 broke the mark set by former McDowell standout Emily Tharpe in 1999 of 12-3.

“It was a fun day,” Crawford said. “States is going to be a good learning experience.”

Also contributing to the Ramblers team victory were individual event winners Ethan King Vincent in the long jump, Owen Hull in the 400 and Kody Klein in the 800.

There were two other multiple event winners on the boys’ sides, as Hayden Skinner of Fort LeBoeuf swept the 110 and 300 hurdles with times of 15.85 and 40.59, respectively

Slippery Rock’s Ethan Folmer, meanwhile, won the high jump by clearing 6-1 and the triple jump with a leap of 44 11 ½.

The four other individual event winners on the boys’ side were Logan Williams of Harbor Creek in the shot put (48 1-½) , General McLane’s Ryan Harvey in the discus (157-8), Fort LeBoeuf’s Alex Blose in the pole vault (13-0) and LeBoeuf’s Adam Lichtinger in the javelin (169-10)

Back to the girls, as Erie High’s Olivia Nola won the 3200 race over top-seed Clair Benton of McDowell, becoming the first Royals’ runner to qualify for states in the short history of the program. Nola clocked in at 11:51.76 to Benton’s 11:59.34.

The day actually got started with Villa edging GM in the 4×800 and things taking off from there.

There were two other individual multi-event winners on the girls’ side.

The PIAA Class 3A championships are set for next Saturday at Shippensburg University.

Raiders’ Day: Brookville Sweeps D9 2A Track and Field Championships; MacBeth, Monnoyer Take Home Manners Award Powered by Janney Montgomery Scott in Clarion
Slippery Rock Girls, Grove City Boys Capture Team Titles on Banner Day at D10 Class 2A Track and Field Powered by Janney Montgomery Scott in Clarion
We use cookies on our website to give you the most relevant experience by remembering your preferences and repeat visits. By clicking “Accept All”, you consent to the use of ALL the cookies. However, you may visit "Cookie Settings" to provide a controlled consent.
Cookie SettingsAccept All
Manage consent