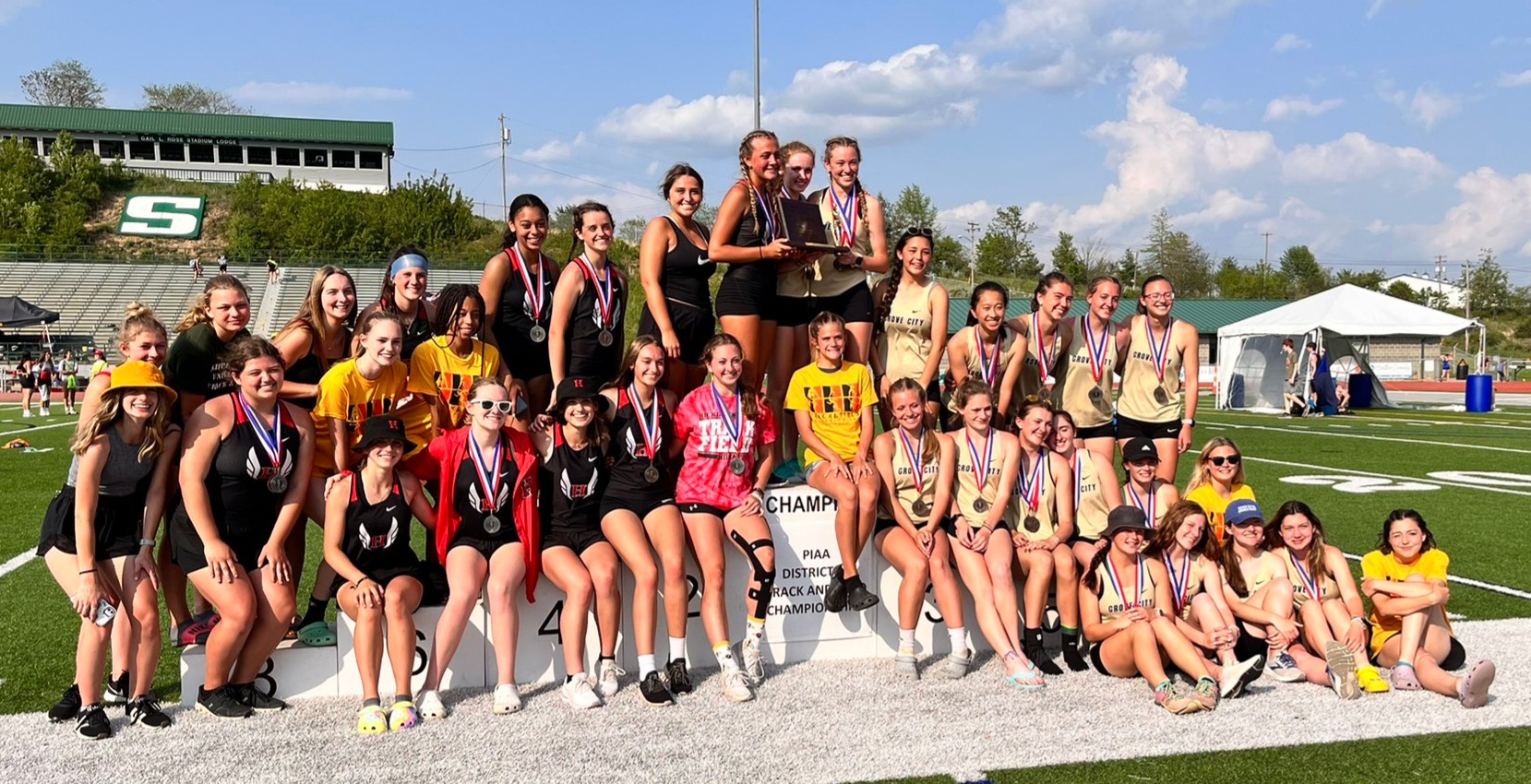 The Hickory and Grove City girls after their tie for the D10 Class 3A team title.

The fierce competitors battled back and forth all day, with the end result being a 127-127 tie for the Class 3A team title.

For the girls, the stars shined bright.

“I started with the long jump and that was a great start to the day,” Nichols said. “My teammates did great as well, we had one, two three up on the podium.”

Those teammates were Feng and Rylee Gorrell.

Hickory’s Christie Boren had herself a day as well, winning the 400 and finishing second to teammate to teammate Paige Griffith in the high jump.

While those two teams stole the show, Erie’s Torreuna Roberts and Franklin’s Ashley Alcorn had big days as well.

Other individual event winners included General McLane’s Sydney Bale in the 3200, McDowell’s Emma Revak in the pole vault and Erie’s D’Annah Davis in the javelin.

Turning to the Slippery Rock boys, the team of Victor Zahn, Tyler Arblaster, Sam Schwartz, and Tom Tedesco needed to win the 4×4 to claim the team title, and they did just that with a time of 3:36.33, outdistancing second-place Warren by over four seconds.

They didn’t have the most firsts, but they had the most points at the end of the day.

Fort LeBoeuf’s Hayden Skinner was a multiple-event winner, taking first in the 110 (14.71) and 300 (40.45) hurdles, while General McLane’s Logan Anderson had a big day, highlighted by a win in the long jump.

McDowell grabbed several firsts, including Benny Whitaker in the 200, Christian Matern in the 1600, Nicolin Pierce in the 800, and Christian Santiago in the javelin.

The PIAA championships are slated for May 27 and 28 at Shippensburg University.

Vote: Who had the best District 10 Track Meet (Boys and Girls) Regardless of Classification Powered by Powered by Janney Montgomery Scott in Clarion
Grove City Boys, Fairview Girls Win D10 Class 2A Track and Field Team Titles Powered by Janney Montgomery Scott in Clarion
This website or its third-party tools process personal data.In case of sale of your personal information, you may opt out by using the link Do not sell my personal information.
×
Manage consent