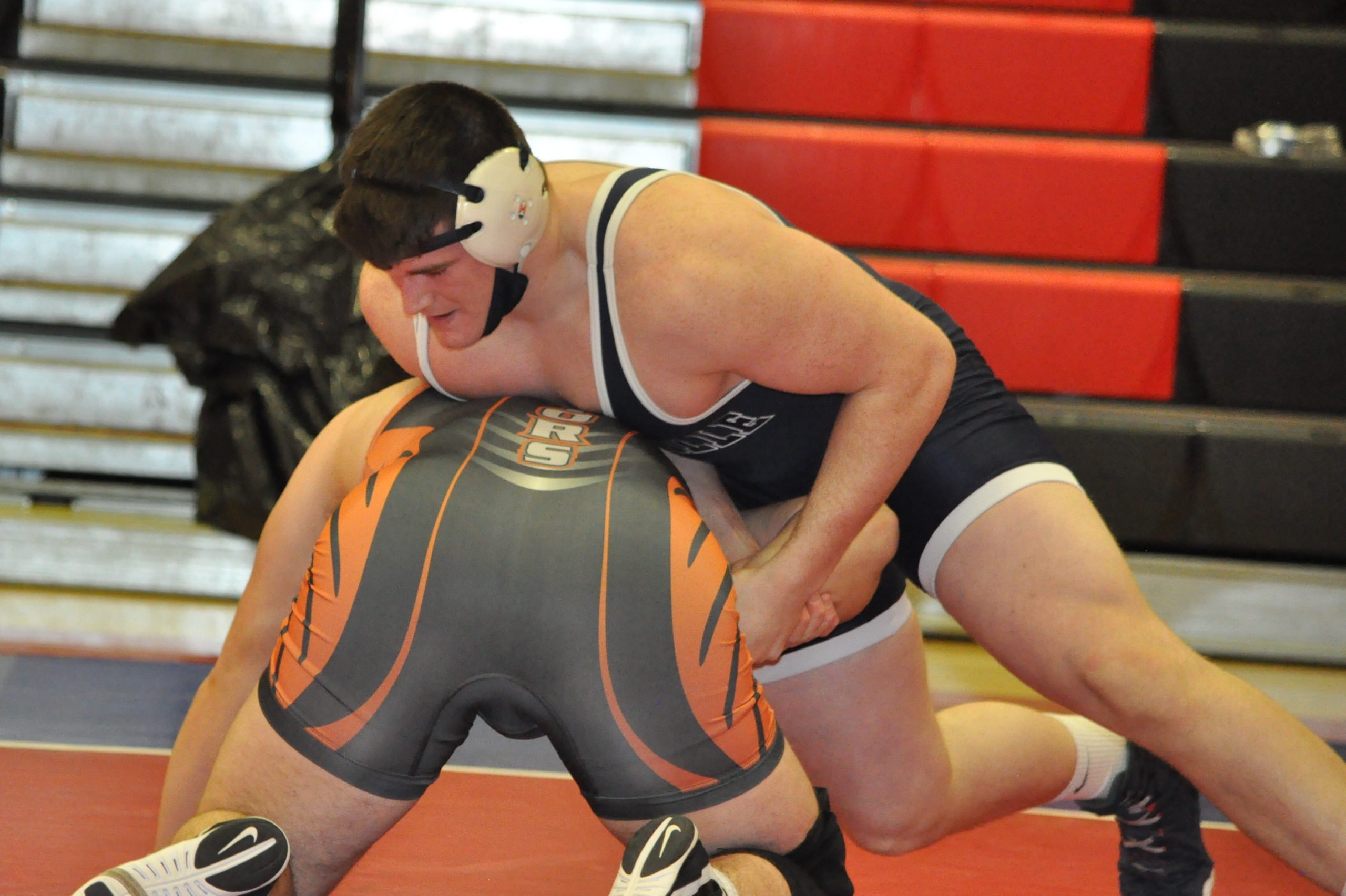 With the high level of wrestling talent in this state, the Pennsylvania high school wrestling postseason is typically a grinder, a high-stakes gauntlet.

This year the intensity of the postseason has been ratcheted up more than usual. Fewer wrestlers have advanced from one round to the next and the extra round of competition (last week’s Super Regionals) has winnowed the number of contenders, with many state-level grapplers eliminated early. Because of this, rather than the usual 20 in each weight class that qualify to compete under the spotlights of the Giant Center in Hershey, the state championship brackets are comprised of a mere eight.

Though each wrestler at the tournament is a guaranteed placer, only one in each weight class will mount the top step of the podium. But before a wrestler can win the tournament, he has to win in the first round. What follows is, therefore, an examination of who each District 9 and 10 wrestler will face and must defeat to open the state championship tournament, a prerequisite to winning it all.

Robison will meet Steven Harris (14-3), a Conwell-Egan freshman, in the first round. Harris was the fourth-place finisher in the East Super Regional. Gill’s opening opponent is freshman Ayden Smith (12-2) of Notre Dame-Green Pond, the runner-up at the East Super Regional. Should Robison, now a two-time state qualifier, and Gill both prevail in the first round, they would meet in the semifinals. Robison has won each of their meetings this season, taking a 2-1 decision in the District 10 finals and downing Gill 5-2 to win the NW Regional tournament.

Class 3A 106 pounds: No qualifiers

O’Neill’s first trip to Hershey kicks-off with a first-round match against the winner of the East Super Regional, Jaden Pepe (16-1) of Wyoming. Pepe, a sophomore, finished third at 106 pounds last year to cap off his first trip to states.

Steen is a three-time state medalist; taking first at 106 pounds as a freshman, third at 106 pounds as a sophomore, and first at 113 pounds as a junior. His first-round opponent is Hamburg senior Parker Davidson (20-5). Davidson, who finished third at the East Super Regional a week ago, is making his second consecutive trip to Hershey. Reinsel is a three-time state qualifier, placing fourth at 113 pounds last year. He draws Southern Columbia freshman Mason Barvitskie (19-1), the East Super Regional runner-up. Przybycien will meet East Super Regional champion, Brett Ungar. A senior at Notre Dame-Green Pond, Ungar finished third at states last year as a 113-pounder.

Class 3A 120 pounds: No qualifiers

Saylor, a state qualifier last year at 113 pounds, will start the event by meeting the third-place finisher at the East Super Regional tournament, Gabe Gramly (32-5), a Mifflinburg senior. Gramly is visiting Hershey for the fourth time in his career, having placed for the first time last year (eighth at 126 pounds). McLaughlin has now advanced to states three of the past four seasons. He’ll open this tournament against Benton senior Gable Strickland (30-2). This is the fourth time Strickland, the East Super Regional runner-up, has advanced to Hershey, placing fifth in 2018 (106 pounds) and 2019 (113 pounds).

Class 3A 126 pounds: No qualifiers

Class 3A 132 pounds: No qualifiers

Filer, a state first-timer, is set to open his tournament against Faith Christian Academy junior Eric Alderfer (21-3). This is the third time Alderfer, last week’s East Super Regional champion has qualified for states, medaling for the first time a year ago at 120 pounds (eighth).

Ho made the trip to Hershey as both a sophomore and junior, finishing eighth in 2020 at 138 pounds. He’ll open his tournament against Bethlehem Catholic sophomore Andrew Harmon, the East Super Regional runner-up. Harmon was a state qualifier last year.

Berger has qualified for states the past three seasons and is a two-time placer, seventh at 132 pounds in 2019 and fifth in 2020. His first-round opponent is the fourth-place finisher at the East Super Regional,

Noah Frack (24-4). Frack, a senior at Brandywine Heights, is making his third consecutive appearance in Hershey, having placed seventh at 106 pounds as a sophomore and fifth at 126 pounds as a junior. Gill’s opening-round foe is East Super Regional champ Levi Haines (27-0) of Biglerville. A junior, Haines is now a three-time state qualifier, finishing second on his two previous trips (106 pounds in 2019, 126 pounds in 2020).

Class 3A 145 pounds: No qualifiers

Two four-time state qualifiers are going at it in the first round. Johnson has medaled in each of his three previous trips to states, finishing eighth as a freshman (120 pounds), fifth as a sophomore (145 pounds), and third last season (145 pounds). A senior, Zac Martin (14-1) of Neshaminy Martin, the East Super Regional runner-up, placed at states for the first time a year ago, earning sixth at 132 pounds.

Casillio draws senior Avery Bassett (35-2) of MIdd-West, who finished third at the East Super Regional. Bassett is now a four-time state qualifier, finishing third at 145 pounds in 2020 (the only time he has medaled). Casillio qualified for states a year ago.

Class 3A 160 pounds: No qualifiers

It will be Church versus East Super Regional titlist Gavin Garcia (24-1) of Southern Columbia in the first round. Church will be stepping on the mat in Hershey for the first time, whereas Garcia is now a three-timer. Garcia has medaled in each of his two previous visits to the Giant Center, taking fourth as a freshman 145-pounder and third as a 160-pound sophomore.

Class 3A 172 pounds: No qualifiers

Finch gets Saucon Valley junior Ty Csencsits (18-3) in the first round. Finch has now qualified for states three years in a row, placing sixth at 182 pounds in 2020. Csencsits, who finished fourth at the East Super Regional last week, qualified for states last year. Karpinski, a state qualifier a year ago at 170 pounds, pairs off with East Super Regional runner-up Wesley Barnes (21-3) of Southern Columbia. A sophomore, Barnes finished fourth at states in 2020 as a 152-pounder. Should both Finch and Karpinski win their openers, they will square off in the semifinals, a rematch of the NW Regional finals that the Sheffield wrestler won 2-0.

Class 3A 189 pounds: No qualifiers

Class 3A 215 pounds: No qualifiers

If both Taylor and Schell win their quarterfinal match-ups, the stage will be set for a rematch of the NW Regional finals that the Brookville wrestler won 1-0. To do that Taylor will need to beat Hughesville senior Caleb Burkhart (27-7) in the first round. Burkhart, fourth at the East Super Regional, is making his first trip to Hershey, whereas Taylor is there for the second consecutive year, having placed fourth in 2020. Schell, a two-time state qualifier, has to get past Hogan Swenski (22-3), a Bermudian Springs senior, in his tournament opener. Like Burkhart, Swenski, runner-up at the East Super Regional, is a first-time state qualifier.

Class 3A 285 pounds: No qualifiers

Not only are the brackets smaller this year, but each class will be wrestled in a single day (as opposed to the usual two). On Friday (March 12) Class 2A wrestlers will take to the mat, with the 106-138 pound session beginning at 8:30 a.m. and the 145-285 pound session getting underway at 11 a.m.. The final round for the lighter weight class is scheduled to begin at 4 p.m. and the upper weights at 7 p.m.. Class 3A takes over the Giant Center on Saturday (March 13), following the same schedule as the preceding day.

D9and10Sports.com Broadcasting Clarion at Port Allegany D9 Class 1A Girls’ Quarterfinal Thursday
Watch Live: Clarion at Port Allegany District 9 Class 1A Quarterfinals
We use cookies on our website to give you the most relevant experience by remembering your preferences and repeat visits. By clicking “Accept All”, you consent to the use of ALL the cookies. However, you may visit "Cookie Settings" to provide a controlled consent.
Cookie SettingsAccept All
Manage consent