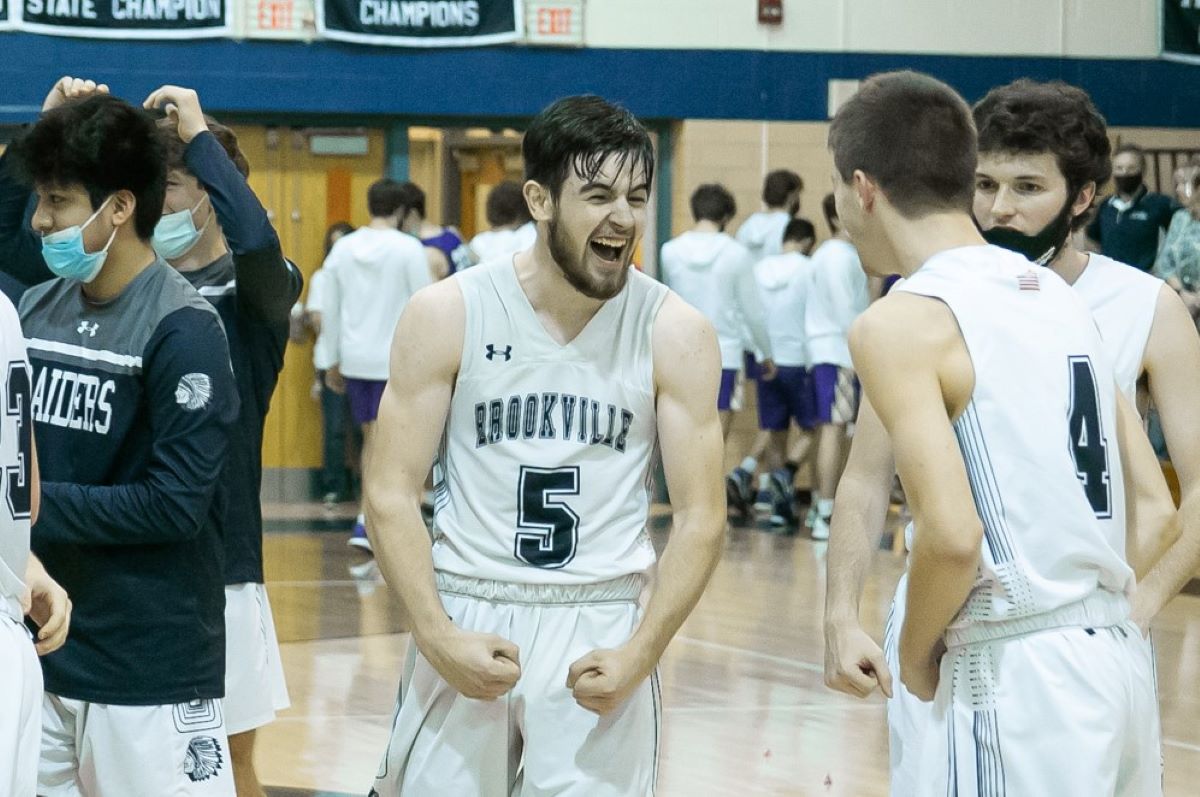 Hunter Geer (No. 5) celebrates with Ian Pete (No. 4) and Garner McMaster (far left)

BROOKVILLE, Pa. – The wrestling and track and field school is now a basketball school too.

Hunter Geer’s turnaround jumper from about seven feet with 1:18 to play broke a tie ball game, and Brookville went on to beat Bishop Guilfoyle, 46-44, in the PIAA Class 3A boys basketball semifinal Tuesday night at Brookville High School.

With the game tied at 43, Geer tried to drive the lane but was stopped by Bishop Guilfoyle’s Konner Kiesewetter. Not to be deterred, Geer did a spinning jump shot that found nothing but net giving Brookville a 45-43 lead.

Watch Geer’s shot via the Brookville School District Facebook feed of the game. The shot happens at the 1:19:40 mark of the video.

“It was just one of those, I was driving in and they cut me off,” Geer said. “I knew the backside was wide open. I just pivoted around, and I was able to hit that shot right there.”

Brookville head coach Dalton Park had no doubt Geer could hit that shot.

“He is cash inside the foul line and in,” Park said. “It’s like a layup. He’s better at that than layups. But he is pretty cash at that jump shot. He gets so high on it. When he shot it, I was actually ok with the shot.”

Hunter Geer releases the shot that turned out to be the game-winner with 1:18 to play. Photo by Mike Maslar

While Geer’s shot was a big one for sure, there was still a lot of basketball to be played after he hit the basket.

After the hoop, Bishop Guilfoyle had a chance to take the lead when Patrick Haigh took a fairly open 3-pointer from the top of the key. The shot was the mark, but the rebound came right to Alex Wood, who was fouled by Robert Keth attempting the shot with 55.8 seconds left.

Wood, however, missed the first free throw before hitting the second to get the District 6 champion Marauders (18-4) back within one, 45-44.

Bishop Guilfoyle had committed only four team fouls at that point and thus had to foul Brookville three times before the Raiders went to the charity stripe to shoot a one-and-one.

The seventh foul occurred with 22.3 seconds to play and sent Keth to the line.

But Keth missed the free throw with Michael Woolridge grabbing the rebounds for Bishop Guilfoyle.

The Marauders then called time out with 11.8 seconds left.

Out of the timeout, the ball eventually ended up in the hand of Haigh. But Haigh’s stepback jumper with 3.2 seconds left was off the mark with the ball caroming towards the right corner and into the hands of Ian Pete.

The buzzer sounded and the Brookville players went crazy.

But hold on a second.

The officials decided that Pete was fouled by Wood before the horn went off. After conferring, they put 0.6 of a second back on the clock.

Watch the missed shot by Haigh and the rebound by Pete.

But in the confusion, it wasn’t Pete who went to the free-throw line.

Instead, Geer was sent to the line.

After a timeout, the junior hit the first free throw but missed the second one.

The rebound caromed toward the left corner where Wood tracked it down.

Again the horn went off.

Again the officials said hold on a second.

It was determined that the clock started before Wood touched the ball – video showed the horn sounding almost simultaneous to Wood touching the basketball.

“When the ball went long, I was really relieved,” Park said. “I was like, there is no way they are going to run, catch that, and throw it in in that amount of time. When the clock went off, my heart stopped. Now I was like, they have this height. They can throw it the length of the floor. They’ve got options. That really worried me at that point in time.”

Park was worried because Bishop Guilfoyle still had a chance – even if it was a slim one.

The Marauders got the ball to Haigh, but his shot just beyond the volleyball attack line was off the mark, and, finally, the Raiders were able to celebrate.

“The first time (the clock ran out) we were going nuts,” Geer said. “Then, all of a sudden, we were like oh we got another one. (The) second time, we celebrated again. Then the third time we just went ballistic.”

Park said he didn’t relax until he knew the game was officially over.

“It was pretty rough,” Park said. “I never celebrated until the official end. I try to hold it a little bit extra.”

Brookville never trailed in the contest, and the game was only tied once – when Wood scored on a layup with 4:05 to play to knot the game at 43.

Until that point, Brookville had held the lead for 27 minutes and 35 seconds straight – from the point Jace Miner gave the Raiders a 2-0 lead 20 seconds into the contest.

With Danny Lauer, who scored 10 of his team-high 13 points in the first half, leading the way, Brookville used an 11-6 first-half run to build a 23-13 lead on a Lauer 3-pointer with 5:24 to play in the second quarter.

The Raiders didn’t seem intimidated at all by Bishop Guilfoyle’s size – the Marauders went 6-foot-9, 6-foot-7, and 6-foot-5 – and attacked the hoop time after time.

“The game plan was to keep attacking,” Brookville’s senior star Jace Miner said. “They have three tall guys, but the way you deal with height is speed. That is one thing we have a lot of. I will take speed over size every day of the week. With that being said, we took that speed to them. They did a really good job trying to contain that speed, but, fortunately, we came away with the W.”

Brookville was able to come away with the win despite Bishop Guilfoyle doing a solid job of taking away Miner holding the Brookville star to just 10 points.

But Miner affects the game in other ways and did so again with six rebounds, three assists, a blocked shot, and a steal.

“I told my dad before this game if I score two points and we win, if I do down on the defensive side and come up with it … I want to win. I don’t really care about my personal stats.”

With Miner being contained, it was balance for the Raiders with Keth becoming the third player to reach double digits with 10 points while adding seven rebounds.

Despite that balance, there were times that Brookville’s offense lagged, and the Marauders took advantage.

But again, the Marauders fought back going on an 8-2 psut to cut the deficit back to one, 36-35, on a Konner Kiesewetter layup with a minute left in the quarter.

Good work on the offensive glass in the final 10 seconds helped Brookville go up three, 38-35, to start the fourth quarter

Griffin Ruhlman and Keth both had offensive rebounds during that span with Keth’s putback with five seconds left giving Brookville the 3-point lead.

That advantage grew to six when Lauer buried a 3-pointer on the first shot of the fourth quarter.

Again, Bishop Guilfoyle had the answer using another 8-2 run to tie the game at 43.

But in the end, Brookville got the plays down the stretch and now sit one win away from the school’s first basketball state title.

“It’s a beautiful moment,” Miner said. “Blessed to have this moment. There are many kids that want to be here today, be where we are. You just have to enjoy it. We are blessed by the glory of God that we are here to show what we’ve got. We’ve got one more. I really think we aren’t done.”

Brookville will face Loyalsock, an 83-70 winner over Math, Civics & Science, in the championship game at 2:30 p.m. Saturday, March 27, at the Giant Center in Hershey.

NOTES – The Raiders are the first District 9 team to advance to the PIAA Championship game since 2013 when Johnsonburg lost to Vaux in the Class 1A title contest. They are also the first non-Class 1A D9 team to make it to the championship game since 1992, when Punxsutawney fell to Steelton-Highspire, 58-49, in Class 4A … Brookville is the 15th District 9 team boys’ team to advance to a PIAA title game. The Raiders are looking to become the first PIAA champion out of D9 in boys’ basketball since Elk County Catholic beat Bishop Hannan, 71-61, in 2006 … The last D9 team to win a state title in a classification higher than Class 1A was the only one to do so, Kane in 1949 when the Wolves won a controversial 45-44 victory over Ashley in Class B (Class A was the largest back then, Class B was the middle, and Class C was the smallest). That game wasn’t officially decided for six weeks because of a clock controversy at the end of the game.