Heroes for a Day: Fairview’s Murphey, Cameron’s Smith Give Their Teams Victories Dec. 29 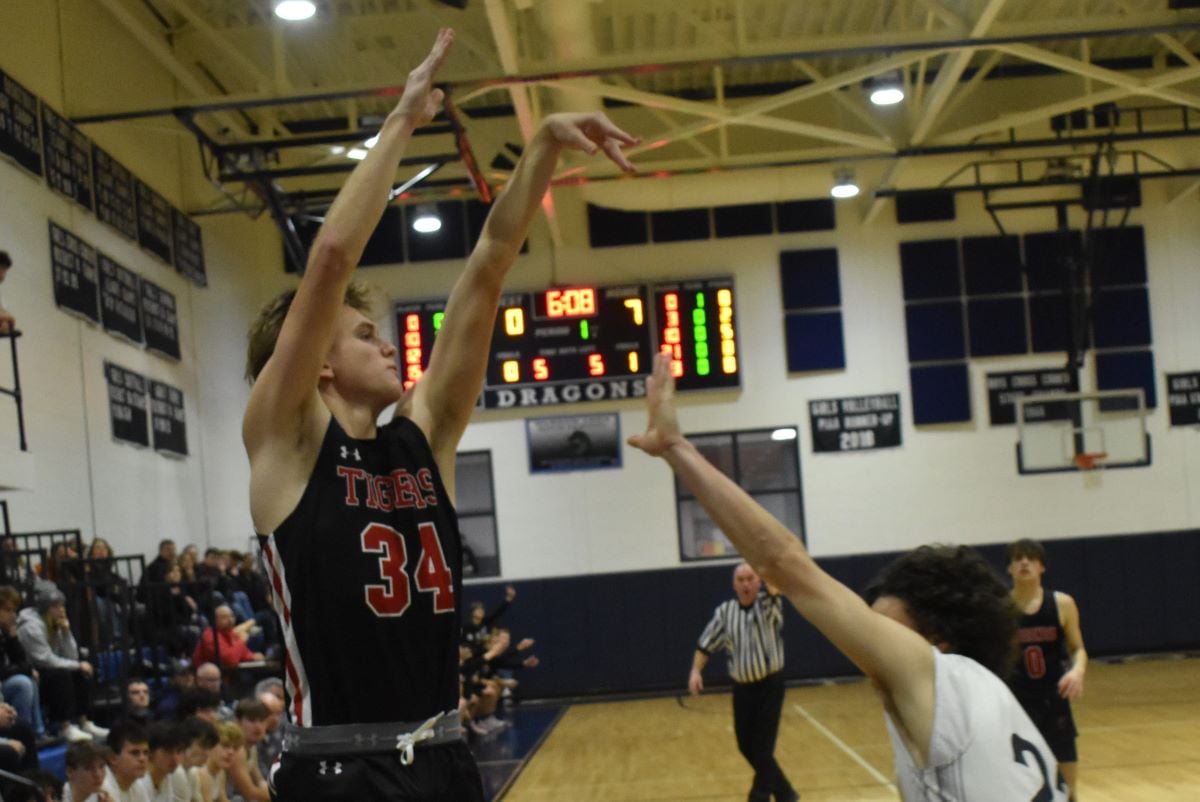 FRANKLIN, Pa. – Archie Murphey called game, hitting a jumper at the buzzer to send Fairview to a 53-51 win over Franklin in a battle of the defending District 10 champions in Class 4A and 3A.

Fairview got off to a slow start, trailing 12-3 after the first quarter. The Tigers trailed by three, 42-39 after the third, but rallied thanks to Murphey and John Seyboldt, the latter of whom scored seven of his 11 points in the fourth quarter.

Jeremy Frazao also scored 11 of his 13 points in the second half for Fairview, which joins Franklin in Class 3A this season.

Johnathan Leccia, who missed time early in the season due to an injury, led Franklin with 13 points, while Cole Buckley added 12 points and Damon Curry eight.

PUNXSUTAWNEY, Pa. – Josh Smith’s putback with 3.5 seconds left lifted Cameron County to a 45-44 win over Clarion in the championship game of the Punxsutawney Holiday Tournament.

Clarion had rallied from a 35-29 deficit heading to the fourth quarter to take a 44-43 lead, but Smith was able to rebound a teammate’s miss and put it home to give the Red Raiders, fresh of a three-overtime victory over host Punxsutawney the night before, the win.

The game was tied at 23 at the break, but Cameron County took the lead in the third quarter thanks in part to a pair of Camryn Allison 3-pointers.

Clarion rallied in the fourth quarter behind six points from Gabe Simko and five from Devon Lauer.

Lauer had a game-high 18 points for Clarion with Simko adding 14 points.

FRANKLIN, Pa. – Cam VanWormer led three Oil City players in double figures with 18 points as the Oilers earned a 60-38 win over Rocky Grove in the Dick Russell Tournament at Franklin.

Jake Hornbeck and Connor Highfield were also in double figures for Oil City with 16 and 12 points, respectively.

ST. MARYS, Pa. – Elk County Catholic used a strong first half to beat Johnsonburg, 50-43, in the opening round of the Elk County Tournament at St. Marys High School.

The Crusaders built a 10-point, 22-12, halftime lead only to watch the Rams rally in the third quarter to cut the deficit to four, 32-28, thanks in large part to 3-pointers from Jake Lobaugh, Luke Zimmerman, and Eric Hoffman.

But ECC got strong free-throw shooting from Lance O’Neill in the fourth quarter to secure the win.

O’Neill was 5 of 6 from the line in the final eight minutes while scoring seven of ECC’s 18 points in the quarter.

O’Neill finished with 14 points to lead the Crusaders with Wil Wortman adding 11 and Jordan Wasko eight.

Aaron Myers scored all 11 of his team-high points in the fourth quarter to keep Johnsonburg within range, while Isaiah Jackson added 10 points for the Rams.

ST. MARYS, Pa. – After a low-scoring first half, St. Marys exploded for 33 second-half points on its way to a 47-33 win over Ridgway in the opening round of the Elk County Tournament at St. Marys High School.

But the Dutch scored 15 third-quarter points led by 11 from Quin Gavazzi to expand the lead to 29-19.

Hickory outscored the Big Macs 14-10 in the fourth quarter en route to the win.

Splain poured in a game-high 20 points for the Terrors with Francis adding 19.

ALLEGANY, N.Y. – In a cross-state battle of Gators, Allegany-Limestone (N.Y.) got 17 points from Anthony DeCapua to beat Port Allegany, 50-31, in the opening round of the Joe DeCarbo IAABO Showcase Small School Division at Allegany-LImestone (N.Y.) High School.

LIMESTONE, N.Y. – Tommy Nyquist’s half-court shot at the buzzer was off the mark as Salamanca (N.Y.) handed Warren its second loss of the season, 54-53, in the opening round of the Joe DeCarbo IAABO Showcase Large School Division at Allegany-LImestone (N.Y.) High School.

Salamanca jumped out to a 20-6 lead after the first quarter, but Warren rallied to cut the margin to 32-30 at halftime.

Lucas Brown led Salamanca, which advanced to the New York Class C state semifinals last season, with 24 points, 16 of which came in the first half, while Andy Herrick added 16 points.

Owen Becker led Warren with 11 points, while Brady Berdine had 10 points, and Nyquist and Konnor Hoffman had nine each.

ALLEGANY, N.Y. – Olean (N.Y.) went 15 of 27 from beyond the 3-point arc on its way to a 71-39 win over Bradford in the opening round of the Joe DeCarbo IAABO Showcase Large School Division at Allegany-LImestone (N.Y.) High School.

Seven of those triples came from Jack DeRose, who scored a game-high 23 points for the Huskies.

Caedyn Tingley added 12 points in the win for Olean.

LINESVILLE, Pa. – General McLane rallied from a 35-22 deficit to start the fourth quarter to earn a 44-43 win over Girard.

Jacob Zietz scored nine of his 12 points in the fourth quarter for General McLane, while Jackson Dailey also had 12 points for GM.

HARBORCREEK, Pa. – Nick Krahe had another double-double with 20 points and 10 rebounds as Harbor Creek earned a 57-51 win over Seneca in the Harbor Creek Tournament consolation game.

Brady Rzodkiewicz also had 20 points for Harbor Creek, while Brayden Wilson made it two Huskies with double-doubles with 10 points and 10 rebounds.

Nate Rynd and Luliano Delillo had 11 points each for Neshannock, which built a 13-point lead after the first quarter en route to the win.

STONEBORO, Pa. – Jay Clover scored 19 points as A-C Valley pulled away in the second half for a 60-35 win over Lakeview in D9/10 crossover action.

HADLEY, Pa. – Four players scored in double digits and three more scored eight points apiece to help Clarion-Limestone roll past Reynolds, 88-54, in the opening round of the Commodore Perry Tournament.

PHILIPSBURG, Pa. – Thirty-three combined points from Blaze Angellotti and Cam Watkins helped Bald Eagle Area to a 53-39 win over Curwensville in the consolation game of the Philipsburg-Osceola Tournament.

SARVER, Pa. – Slippery Rock put up 46 points in the first half on its way to a 60-35 win over Brashear in the Freeport Tournament.

The Rockets, who led 46-13 at halftime, got a balanced effort, led by Elam Pyle, who scored 14 points.

Carson Papay had 14 points and Ronan Dorler 10 for the Bison.

PUNXSUTAWNEY, Pa. – Noah Kengersky hit three 3-pointers on his way to a game-high 15 points to help Punxsutawney to a third-place finish in its own tournament thanks to a 56-24 consolation-game victory over Marion Center.

The game was tied at 13 at the end of the first quarter before Punxsutawney outscored the Stingers 43-11 the rest of the way including 24-6 in the second half.

Noel Bunyak was the lone Berry in double digits with 11 points.

James Henry led all scorers with 17 points for Venango Catholic.

The Wolves led 55-0 at halftime and 63-0 at the end of the third quarter before getting the first two points of the fourth quarter.

Forest Area finally found the bottom of the net 42 seconds into the fourth quarter on a Warren Dashner jumper from just inside the foul line.

Dashner, Mitchell Bawden, and Zach Carll each had baskets in the fourth quarter for the Fires.

Pizza Hut Scoreboard: Dec. 29, 2022: D9/10 Basketball
A Long Time Coming: DCC Wins Brookville X-Mas To. for First Time since 2015; Maplewood Wins D10 Title Rematch; Punxsy Rallies from 13 Down in 4th to Win Dec. 29
This website or its third-party tools process personal data.In case of sale of your personal information, you may opt out by using the link Do not sell my personal information.
×
Manage consent