Heartbreak for Hickory: Hornets Rally from 19 Down in 2nd Half but Lose on Shot with 22 Seconds Left 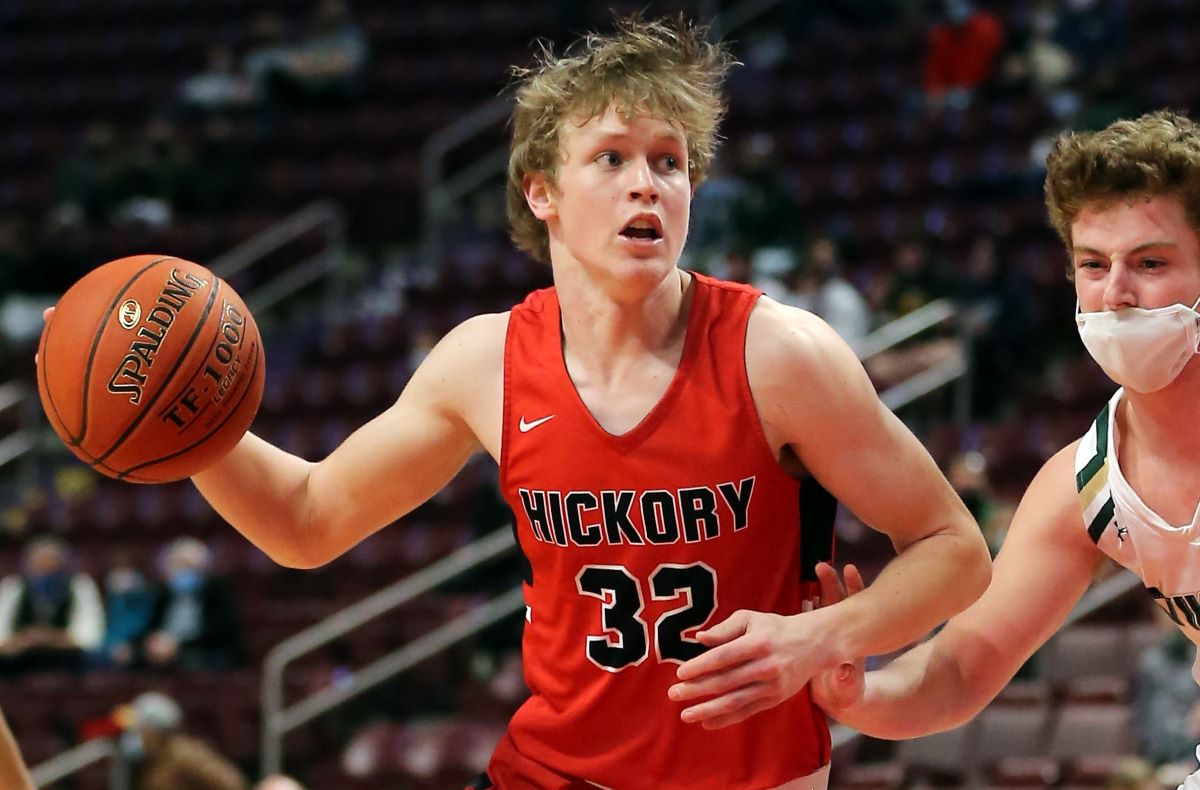 Connor Evans of Hickory is defended by Allentown CC's Griffin Patridge during the PIAA Class 4A championship game Thursday. Evans finished with 10 points and 16 rebounds for the Hornets. Paul BurdickPhoto by Paul Burdick. Check out more of Burdick's work hereof

Tyson Thomas’s layup with 22.9 seconds left lifted Allentown Central Catholic to a 41-40 win over the Hornets in the PIAA Class 4A boys basketball championship game Thursday night at the Giant Center in Hershey.

Hickory had two chances in the final seven seconds to get the win.

Following a timeout by Hickory, the Hornets got the ball to Evans, but his contested one-handed jumper from just inside the foul line was too strong.

“I really thought we were going to pull it out there at the end,” Hickory head coach Chris Mele said. “We had two shots at it. I thought we had a pretty good play designed. It is what it is. All the credit has to go over there (to Allentown Central Catholic).”

Thomas’ game-winning basket, his only made shot in 14 attempts, ruined what was shaping up to be a storybook ending for Hickory.

“Our guys showed why they belonged here,” Mele said. “Their heart, their determination, their fight.

Defense led the way in the comeback.

After yielding a basket to Liam Joyce, who led Allentown Central Catholic with 18 points, with 5:31 left in the third quarter, Hickory didn’t give up another basket until a Joyce layup with 2:40 left to play made it 39-36 Vikings.

That stretch of 10:51 between baskets by Allentown Central Catholic included Hickory getting stops on eight of the final nine Viking possessions of the third quarter, including the Hornets taking a pair of charges to start that stretch.

“Guys were just fighting, clawing, scratching, doing whatever we could,” Chris Mele said.

The defense helped Hickory get within 10, 34-24, going to the fourth quarter.

A pair of 3-pointers – one by Aidan Enoch and another by Payton Mele plus baskets by Fazzone and Connor Evans sliced the deficit to three, 37-34, following a Mele 3-pointer with 5:11 left.

A Matthew Cannone jumper with 4:03 cut the deficit to one, 37-36, the closest Hickory had been since the game was tied at six with 2:07 to play in the first quarter.

After Joyce restored the lead to three, Evans got the Hornets back within a point, 39-38, with 2:25 to play before Fazzone gave them their first lead since 2-0 four seconds into the game, with his late basket.

“No, not at all,” Chris Mele said when asked if there was any wavering when Hickory got down 19 points. “Matt Cannone was really like a big, vocal leader tonight. He would just not let these kids quit. I tip my hat to him. He was full of energy tonight, and the kids played off his energy.”

Hickory dug itself the 19-point hole the old-fashioned way.

“I am sure there was some of that (nerves),” Chris Mele said. “We’ve never been here. They are young kids. It was overwhelming for us coaches to come through here. I’ve dreamt of this moment all my life. For me coming out here, I was a little bit starstruck in the beginning. So, I blame myself for that.”

Despite that, they were only down eight, 20-12, following a 3-pointer by Cannone late in the half.

But a three by Andrew Csensits and an old-school three by Joyce with just 0.1 of a second left pushed the Allentown Central Catholic lead to 14, 26-12, at halftime.

The Vikings then started the second half by scoring the first five points and seven of the first nine to take the 19-point lead.

Chris Mele said despite the loss, the Hornets were going to enjoy their moment.

“We are going to enjoy this tonight,” Mele said. “This will be a celebration of what we’ve done. Yeah, of course, we came up short. But, our boys need to celebrate. We’ll have fun tonight and just enjoy this whole experience.

Cannone led Hickory with 11 points, while Evans had a double-double with 10 points and 16 rebounds. Payton Mele also scored 10 points.

No one else had more than five points for Allentown Central Catholic.