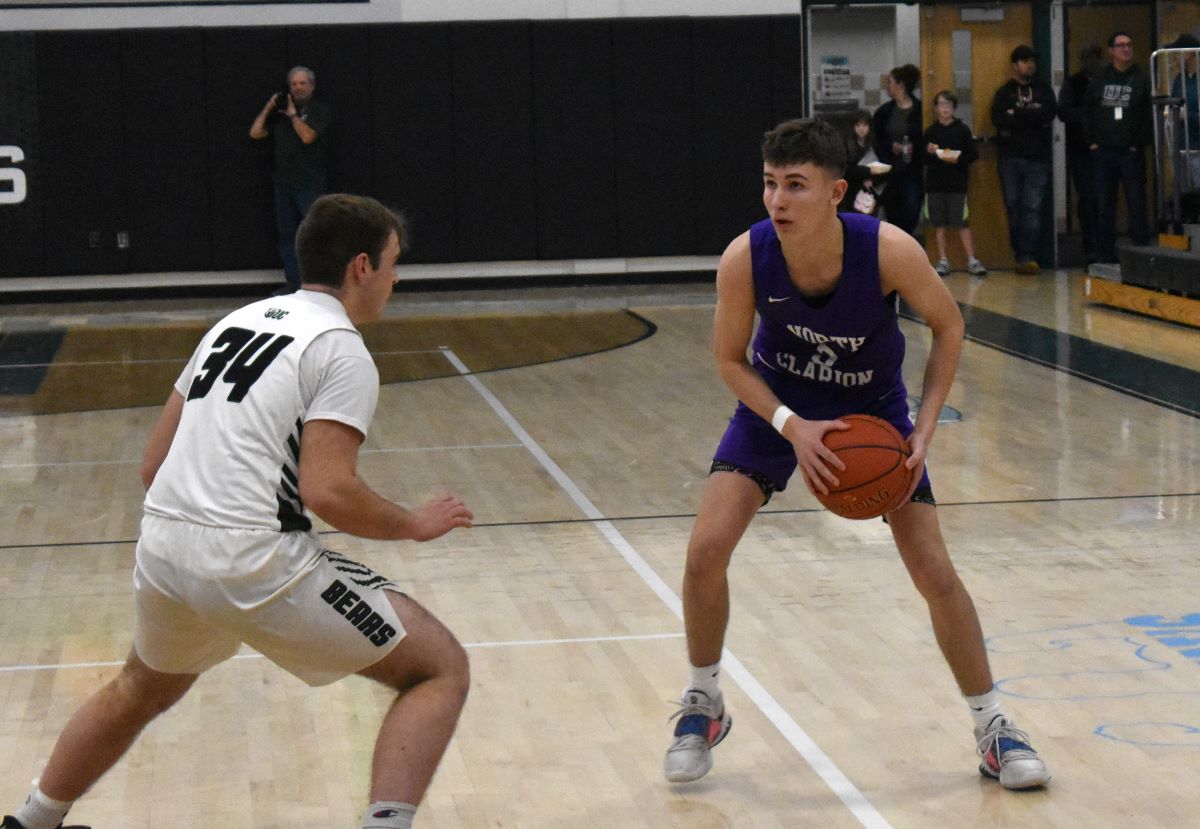 SENECA, Pa. – Going 18 of 23 from the free-throw line, Aiden Hartle tied his career high with 36 points to lead North Clarion to a 71-64 win at Cranberry.

Black hit three 3-pointers and also went 9 of 11 from the line for the Green Wave.

Ty Daniels had a big night for Northen Potter with 22 points with Nolen Smith adding 17 points and Wyatt Kivve 11 tallies.

Clouse hit six 3-pointers on his way to the career night.

His twin brother, Mason, added 13 points in the win for the Bulldogs with Aiden Ortz contributing 10 points and Braylon Wagner eight.

Cook had 10 points and 11 rebounds for the Raiders, whose head coach now has a career mark of 100-39 in his sixth season at the helm including a trip to the PIAA Class 3A championships in 2021.

The Brookville Raiders gather with their head coach Dalton Park after helping him win his 100th career game Wednesday night in a 43-27 victory over Johnsonburg. Park, in his sixth season, improved his record to 100-36. He’s the fourth coach in the boys’ basketball program to reach 100 wins, following Larry McManigle, Randy Reitz and John Chilcott. Only Reitz got to 100 career wins faster, by one game.

The Dutch, who led 22-16 at the end of a quarter, found themselves trialing 29-26 at halftime before retaking the lead, 38-36, going to the fourth quarter.

DuBois was able to regain the advantage late, 50-49, before Gavazzi’s dagger put St. Marys ahead for good.

The triple was Gavazzi’s fifth of the night and second of the fourth quarter. He also hit three in the first quarter and finished with a team-high 19 points.

Anthony Nedzinski added 14 points for the Dutch who also got seven from Tanner Fox. Five of Nedzinski’’s tallies came in the fourth quarter where he hit a pair of free throws and a 3-pointer.

Tyson Kennis poured in a game-high 20 points for DuBois including 10 in the second quarter.

Maddox Bennett hit four 3-pointers, three in the opening half, and ended with 12 points for the Beavers, while Cam Thompson also scored 12, all in the second half including seven in the fourth quarter.

CURWENSVILLE, Pa. – Curwensville built a 17-point halftime lead and then held off a furious Mount Union second-half rally to pick up a 59-58 ICC North home win.

The Golden Tide led 37-20 at halftime thanks to 13 points from Chandler English, including 11 in the first quarter.

But Mount Union roared back in the third quarter outscoring Curwensville 24-9 in the quarter behind 11 points from Jayvien Brumbaugh,

Curwensville struggled from the line in the fourth quarter going 2 of 9 but did get five points from Davis Fleming and four each from Dan McGarry and Parker Wood to hold on for the win.

English and Fleming led the Golden Tide with 15 points each with Wood adding 12 and McGarry seven.

Brumbaugh had a game-high 22 points for Mount Union with Bryce Danish adding 16 and Andrew Cuff nine.

ST. MARYS, Pa. – A week after eeking out a 2-point win at Punxsutawney, Elk County Catholic got a balanced scoring effort and a strong defensive performance to post a 45-25 win over the visiting Chucks.

AUSTIN, Pa. – Preston Alfieri hit three 3-pointers on his way to a game-high 19 points to lead Smethport to a 50-36 road NTL victory over Austin.

Carson Dunn and Hayden Leet each added nine points for the Hubbers who also got seven from Keegan Watson.

GALETON, Pa. – Reilly Streich scored 22 points and hauled down 10 rebounds to pace a 59-39 win for visiting Coudersport over Galeton in NTL action.

Micah Batson added 16 points, six rebounds, and four steals for the Falcons who also got nine points from Mason Roessner and eight from LT Myers.

EMPORIUM, Pa. – Tied at 26 going to the fourth quarter, Cameron County outscored visiting Port Allegany 18-9 in the final eight minutes to pick up a 44-35 NTL win.

Shaffer and Camdyn Allison led Cameron County with 15 points each.

Rayce Weaver and Taylor Rupp each added seven points in the win for the Panthers.

Talan Reese scored 10 of his 13 points in the opening quarter for the Owls, while Brendan Warner scored 17 of his game-high 22 in the third quarter when he hit three 3-pointers.

Hobie Bartoe added 13 points, 11 in the opening frame, while Braden Grossman scored 10 of his 12 in the third quarter and Jacob Jones hit two 3-pointers and scored eight of his 12 in the fourth quarter.