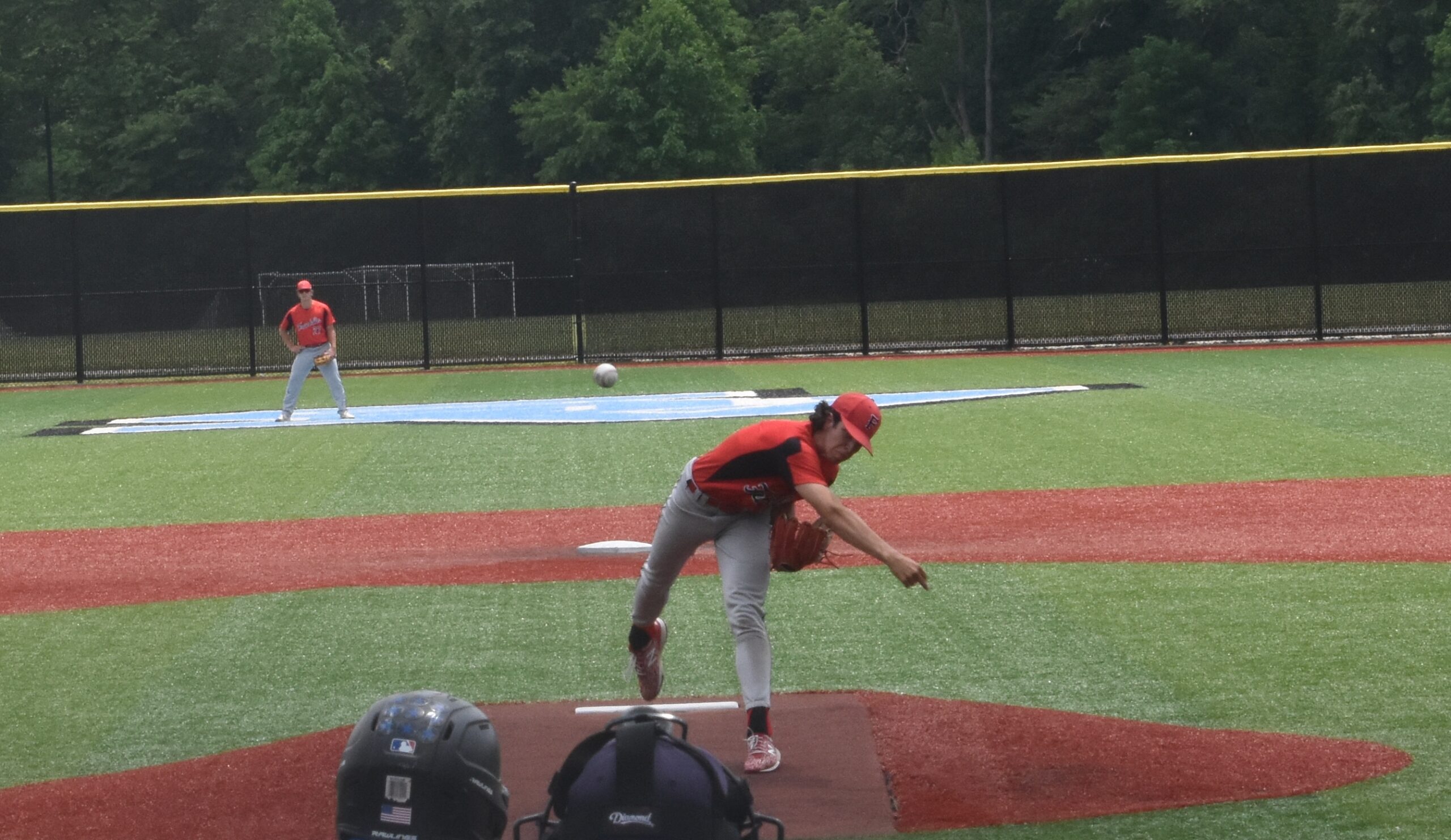 HARMONY, Pa. – It’s a matchup that may very well play out in the SEC in a few years, but on Monday, it was Luke Guth and Franklin that got the best of Drew Lafferty and South Park in the first round of the PIAA Class 3A baseball championships on Monday at Seneca Valley High School.

Guth, a junior and Vanderbilt commit, went the distance and had 16 strikeouts, outdueling Lafferty, a senior and Kentucky signee, who finished with nine punchouts in 6 ⅓ innings.

“You always feel good when number seven is on the mound,” said Franklin coach Brian Schmidt.

Guth allowed just two hits and two walks, throwing 67 of his 107 pitches for strikes. He had multiple strikeouts in every inning but the fifth and started and finished the game by striking out the side.

Ethan Nightingale was hit by a pitch with the bases loaded in the second inning, which proved to be all the offense Franklin needed. That brought in Aidan McCracken, who walked to start the inning.

There was still just one out and the bases loaded in the second, but Lafferty was able to escape further damage by retiring Guth and Caleb Doyle.

That score held into the seventh, when Nightingale singled with one out, marking the end of Lafferty’s afternoon as he had reached his pitch limit. He turned the ball over to Austin Lafferty, who allowed a walk to Guth before getting Doyle to ground out. Wible came up and delivered the knockout punch, a two-run double that made it 3-0.

“It really just gave us a sense of security,” Wible said. “I saw a lot of offspeed pitches. I was sitting fastball.”

Guth, meanwhile, worked around a leadoff walk in the bottom of the seventh before striking out the next three batters – two swinging and one looking to end the game.

“My confidence just kept going up,” said Guth about his performance as the game went on.

Both starting pitchers gave up hits to each other in the first inning, but Guth never really faced any significant jams. He allowed a one-out walk in the second and a one-out single in the fifth. The hardest-hit ball against him came in the fourth inning when Luke Rider flew out to the warning track in center on a ball that Wible was able to track down.

The Knights finished behind Fairview in the Region 4 standings in the regular season and fell to the Tigers in the D10 title game, but now find themselves among the final eight in the state (Fairview is as well after a 3-2 win over Hopewell.)

It’s also a Franklin program that had some success in the PIAA playoffs when this current senior class were freshmen, advancing to the semifinals.

“It helps out big time,” Guth said of the big-game experience. “The seniors have that experience under their belt and they know how to handle it.”

The Knights will now face D9 champion Punxsutawney, an 8-2 winner over Penns Valley in the quarterfinals on Thursday.

SLIPPERY ROCK, Pa. – West Middlesex was in command with a 3-0 lead over Neshannock, but the Lancers rallied with four runs in the sixth inning to earn a 4-3 victory over the D10 champs.

Richie Preston, who has put together a phenomenal postseason for the Big Reds, allowed just two hits into the sixth and was a bit unlucky in the sixth.

JR Prossen drew a leadoff walk, which was followed by a single from Colten Shaffer. With runners on second and third, Nathan Rynd had a swinging bunt that brought in Prossen, and an errant throw allowed Shaffer to score to get the Lancers back within one.

After a popout, Michael Altmeyer singled, sending Rynd to third. Altmeyer then stole second and both came home on Giovanni Valentine’s hard-hit single up the middle that gave Neshannock a 4-3 lead.

The Big Reds threatened in the bottom of the sixth, with Kyle Hurley and Blase Fox singling with two outs, but Sebastian Coiro capped his strong outing by getting a strikeout to end the threat.

Cam Foy, making his first pitching appearance of the season, allowed a two-out single to Julian Trott, but was able to pick up the save for the Lancers.

Coiro allowed three runs in six innings on eight hits, striking out 10 without issuing a walk.

Valentine had a pair of hits for the Lancers and Hurley and Fox two hits apiece for the Big Reds.

Neshannock advances to play Riverside, a 5-3 winner over Mount Union, on Thursday.

Suplizio Homer Lifts DCC SB to Win; Jburg Gets 1st PIAA Win; ECC Falls Powered by North Washington Rodeo
Houser Dashes Home to Lift Clearfield SB Past Franklin Powered by North Washington Rodeo
This website or its third-party tools process personal data.In case of sale of your personal information, you may opt out by using the link Do not sell my personal information.
×
Manage consent