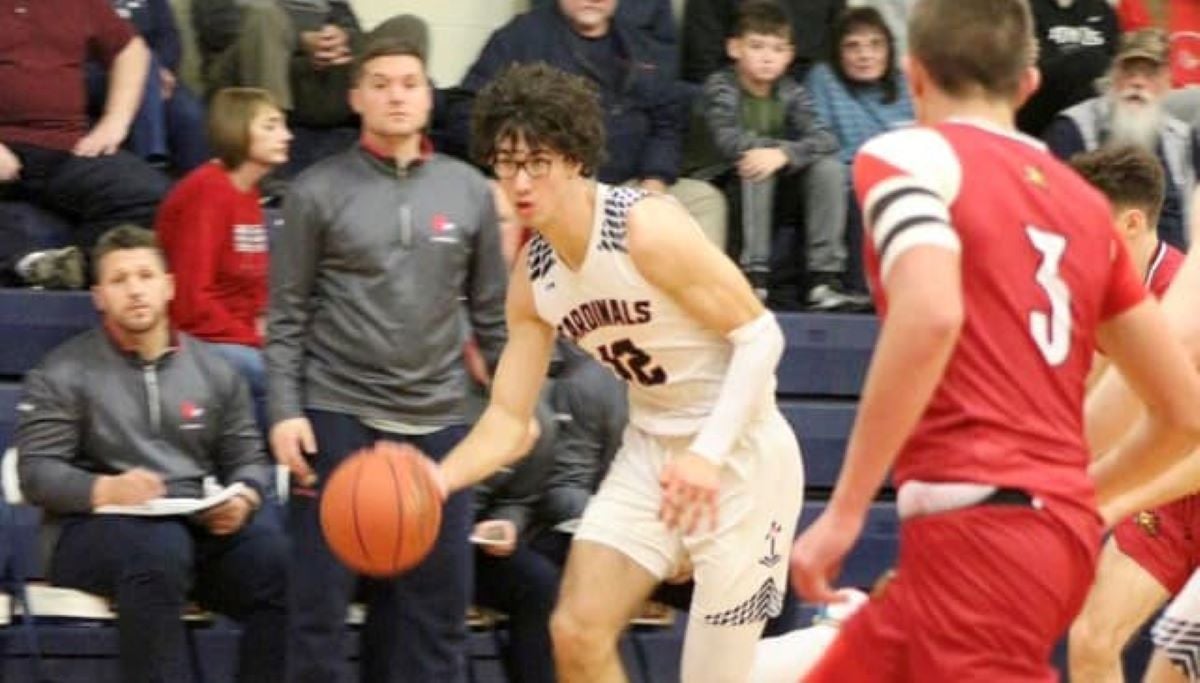 Andrew Green's 3-pointer with around 20 seconds left lifted DCC to its first win in Ridgway in nearly 12 years. Photo by Carlie Gritzer

Green’s triple came with about 20 seconds left in the game and the Cardinals down a pair.

Ridgway had a shot at the horn to win the game but it was off the mark.

DCC led 28-25 going to the fourth quarter only to watch Ridgway rally to take the 38-36 lead thanks to three 3-pointers from Aaron Sorg, who scored 11 of his team-high 17 points in the final eight minutes.

But Green, who hit a pair of triples of his own in the fourth quarter, netted a game-high 20 points for the Cardinals.

The victory was just the third for DCC over Ridgway since the 2012 season with the Elkers going 18-3 in that span. It was also the Cardinals’ first win in Ridgway since a 68-59 double-overtime victory on Feb. 25, 2011, in the District 9 Class 1A quarterfinals. It had been over 13 years since DCC won a regular-season game in Ridgway last taking a regular-season contest 72-53, on Dec. 14, 2009.

SHEFFIELD, Pa. Behind 29 points from Connor Finch, Sheffield earned its second win of the season over Smethport, 58-40.

The start of the game was the exact opposite from the first meeting, which saw Smethport take a 12-0 lead after the first quarter. This time around, Sheffield jumped out to the 12-0 lead and took a 20-10 advantage into the second quarter.

Finch scored 11 of his points in the fourth quarter, while Mason Silvis finished with 11 points and Lucas McNeal and Leihden Wotorson seven apiece.

McNeal talked about the win:

WEST SUNBURY, Pa. – Building a 16-point lead heading to the fourth quarter, Moniteau held off a furious A-C Valley rally to pull out a 63-56 home win.

The Warriors were ahead 47-41 after three quarters only to see A-C Valley explode for 25 fourth-quarter points behind nine from Jay Clover and six from Brody Dittman.

Clover and Alex Preston each had 15 points for A-C Valley with Ryan Cooper adding nine and Ian Runyan eight.

Fox scored 13 points for the Dutch with Gavazzi adding 10.

Josh Smith added 14 points for the Red Raiders who also got 10 apiece from Camdyn Allison and Maddox Baughman.

Jake Lobaugh added 12 points for the Rams who also got eight from Kole Asti.

Caldwell had 12 points and 13 rebounds with Francis adding 13 points, 11 assists, and two steals.

Button had 11 points and 10 rebounds for the Gators, while Rudding got hot late scoring 10 of his 18 points in the fourth quarter.

Jacob Hooftallen had 17 points and eight rebounds for Austin.

All 24 of Lauer’s points came in the first three quarters, and he hit six 3-pointers in the contest.

Gabe Smiko added 14 points in the victory with Bryce Brinkley chipping in 11 points and four assists.

Logan MacKinley also had eight points in the win.

Jacob Callihan had a double-double in the win for the Gremlins with 16 points and 11 rebounds, Taite Beighley added 10 points, Hobie Bartoe six points and seven rebounds, and Braden Grossman five points and six assists.

Aiden Hartle netted a game-high 22 points for North Clarion with Drake Irwin hitting three 3-pointers on his way to an 11-point game.

Say also grabbed a team-best 10 rebounds for the Panthers

Kieran Fricko led Redbank Valley with 16 points with Owen Clouse and Braylon Wagner each scoring 11 and Aiden Ortz chipping in 10.

Dawson Camper had 13 points for Union with Zander Laughlin and Payton Johnston each chipping in seven points.

GALETON, Pa. – Braiden Cimino led a foursome of Galeton players in double digits with 15 points as the Tigers knocked off visiting Northern Potter, 67-48.

CURWENSVILLE, Pa. – A second-half comeback attempt by Curwensville fell just short in a 42-40 loss to visiting Glendale in ICC play.

The Golden Tide trailed 27-15 at halftime but rallied behind Parker Wood’s 14 second-half points to make it a game.

Wood, who scored all eight of Curwensville’s fourth-quarter tallies, finished with 16 points with Davis Fleming adding nine for the Golden Tide.

Mason Peterson had a team-high 15 points for Glendale with Landen McGarvey adding 13.

Jacob DeSimone scored six points in the final eight minutes for the Mounties with Oliver Harpster scoring five points in the quarter.

Cole Miller had a double-double for Clearfield with 17 points and 10 rebounds with Moren Billotte adding 10 points and four boards.

The loss snapped a seven-game win streak for the Bison, who hadn’t lost since Dec. 19.

Risser Scores Season-High 28 Points as DCC Girls Down Ridgway; ECC Tops Kane Jan. 17, 2023
YDL Sports Network to Broadcast Karns City at North Clarion Girls Wednesday
This website or its third-party tools process personal data.In case of sale of your personal information, you may opt out by using the link Do not sell my personal information.
×
Manage consent