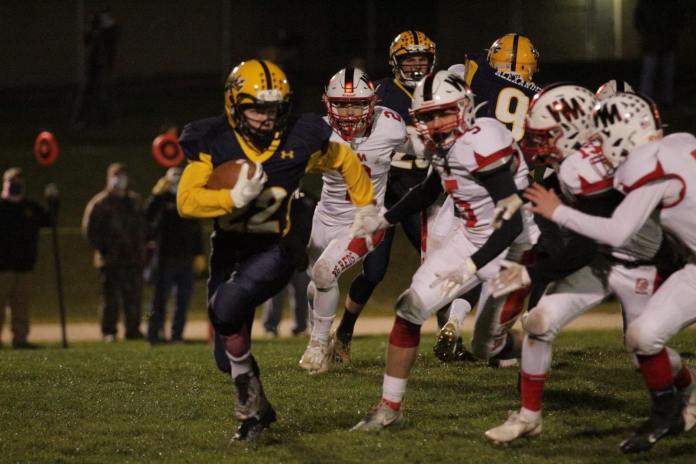 RUSSELL, Pa. – Eisenhower’s defense has been stifling all year long, and rose to the occasion when the Knights needed it most.

Eisenhower led West Middlesex, 22-21, in overtime with the Big Reds getting set to attempt a 2-point conversion from the Knights’ one yard line. WM’s Ian Smith tried to get the win on a dive up the middle, but the Eisenhower defense stopped him inches short of the goal line to secure the win in double overtime and send the Knights to the District 10 Class 1A title game.

“We’ve been in situations like this last year,” Eisenhower’s Cael Black said. “This year, thankfully, we haven’t had to. But we were put to the test tonight and I think we really stepped up. I think our interior guys Colby (Hagg) and (Jared) Beers stepped up big time to make a big play and won us the game.”

The Knights’ (8-0) defensive front, including Black, Hagg, Beers, Gannon Jaquay, Benji Bauer and others had to stop the conversion attempt twice. On the first try, quarterback Ty Tate’s pass fell incomplete, but a flag for defensive pass interference set up the final play.

“We were just trying to keep them calm, settle them down,” Jaquay said about the huddle before the final play.

Though it concluded as a defensive battle, it looked like the game might have plenty of offensive fireworks early.

Eisenhower took the opening kickoff and methodically marched down the field. By the time Black finished the drive with a 9-yard touchdown run, the Knights had taken nearly seven minutes off the clock. They wouldn’t cross the goal line again until overtime.

“When we went out and scored on the opening drive, I think a lot of guys thought it was going to be another blowout,” Black said. “But they ended up scoring and it ended up being a close game, which we need right now.”

Eisenhower got a fourth down stop on WM’s opening possession, but went three-and-out. The punt netted zero yards and the Big Reds took over from the Eisenhower 26.

West Middlesex took advantage of the short field as Tate ran in from four yards out to knot the game at 7-7.

WM threatened late in the first half, but a pair of big plays were negated due to penalties, a theme for the game for both teams.

The Big Reds looked poised to take the lead on their first possession of the second half. A pair of 30-plus yard pass plays had WM inside the Eisenhower 10. The Knights were able to force a turnover on downs to get the ball back.

Eisenhower marched down to the WM 30, but the Big Reds popped the ball out of Mike Jones’ hands and recovered to stop the drive.

Early in the fourth quarter, Trumbull turned a busted play into what the Knights thought was a 63-yard touchdown run. A block in the back penalty erased the score.

With just under four minutes to play in the game, the Knights thought they had a touchdown pass from Trumbull to Zane Alexander, but again a penalty took points off the board.

West Middlesex took advantage of a pair of Eisenhower penalties in the final two minutes to move down to the Knights 15. Chris Smith set up for a potential game-winning field goal with 13 seconds to go, but the kick sailed into the line of scrimmage to send the game to overtime.

In the first overtime, Tate found Chris Smith in the back of the end zone on first down for the 10-yard touchdown. They hooked up again on the 2-point conversion to give the Big Reds a 15-7 lead.

The Knights answered with a 5-yard Black run and Trumbull leapt over the goal line to send the game to a second overtime.

Eisenhower had the first possession and Trumbull dove in to finish off a 5-yard run. Jake Venman connected on the extra point to put the Knights up 22-15.

Colby Johnson scored from 5 yards out to set up the final stand.

Eisenhower’s defensive line earned the Jim Kelly Player of the Game powered by the Allegheny Grille of Foxburg.

GREENVILLE, Pa. – Cole Toy and Jalen Wagner scored two touchdowns each as Reynolds rolled past Cambridge Springs in the District 10 Class 1A semifinals on Friday.

Toy scored both of his touchdowns in the first half on a 6-yard run and a 15-yard pass from Brayden McCloskey.

Both of Wagner’s runs came in the third quarter (47, 40), the latter of which put the ‘Mercy Rule’ into effect.

Aidan Mull’s 1-yard scoring plunge made it 14-0 in the second quarter, and Dreyvin Livingston scored on a 4-yard run to get the scoring started in the third quarter.

Toy did most of his damage in the first half, accumulating 80 yards on the ground.

The Raiders also forced a pair of first-half turnovers. They limited the Blue Devils to just 74 yards of total offense for the game.

With the win, the 7-0 Raiders advance to play Eisenhower, a 22-21 double-overtime winner over West Middlesex, in the D-10 title game next Friday.

Defensive Stalwarts: Grove City, Hickory Pitch Shutouts in D-10 Class 3A Semifinal Wins
District 9 and District 10 Football Live Scoreboard – Week 8 2020
We use cookies on our website to give you the most relevant experience by remembering your preferences and repeat visits. By clicking “Accept All”, you consent to the use of ALL the cookies. However, you may visit "Cookie Settings" to provide a controlled consent.
Cookie SettingsAccept All
Manage consent