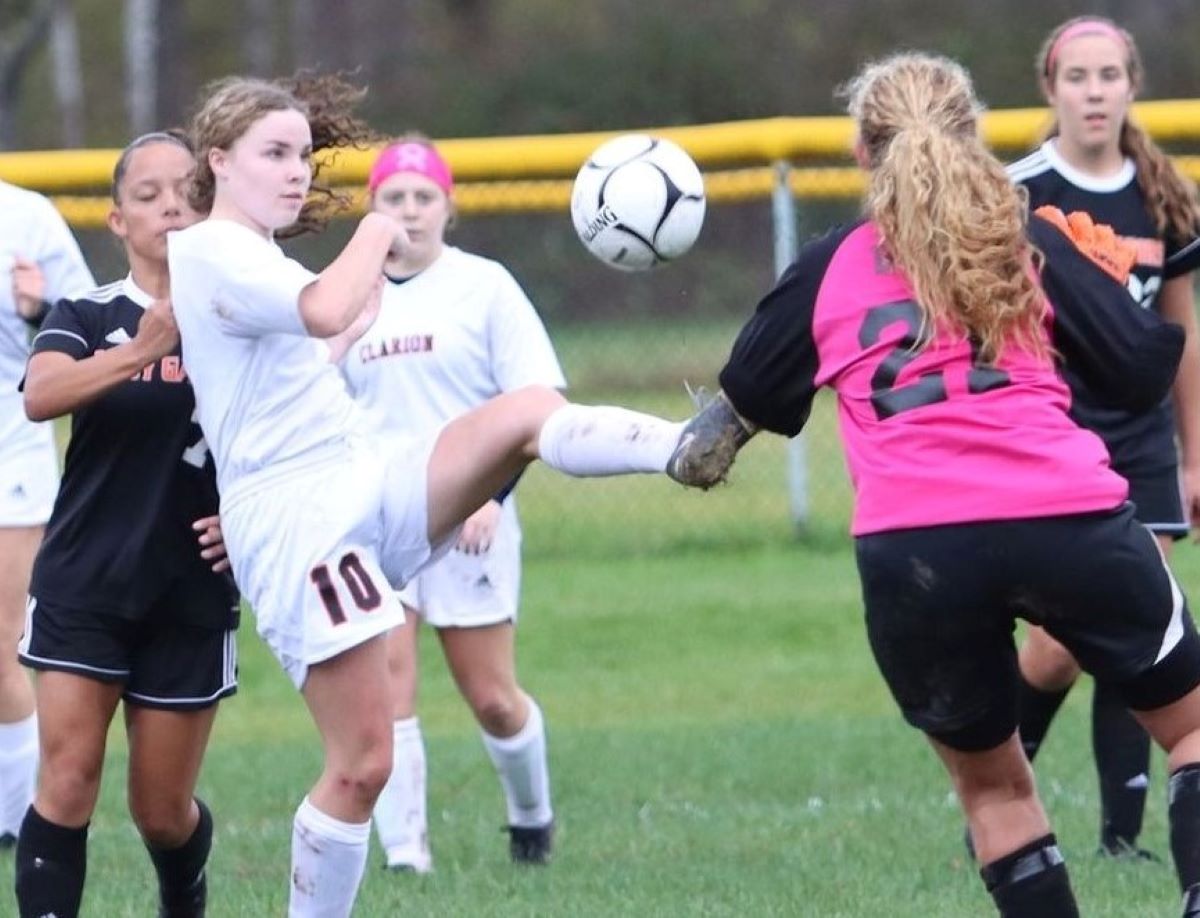 Alex Leadbetter scores one of her three goals Monday. Photo by Maria Wilson

PORT ALLEGANY, Pa. – Scoring three second-half goals, the Clarion girls’ soccer team made the two-hour trip north to Port Allegany a happy one with a 5-2 victory over the Lady Gators in the opening round of the District 9 Class 1A playoffs.

In the rain, Alex Leadbetter broke the 2-all tie when she found a ball that ricocheted off Lexi Coull and found the back of the net. A nice play by Anna Gribik to advance the ball down the middle helped set up the score.

Leadbetter, who had the hat trick, then made it 4-2 when she took the rebound off an Evelyn Lerch shot and scored.

Joyce Kim ended the scoring for the Lady Cats when she knocked home a shot off a corner kick from Coull.

Chesney Boggess helped keep Port Allegany off the board after halftime stopping all 11 shots she faced in the half, and she got some help from midfielder Abbi Frederick, who made a save by blocking a ball after Boggess was caught out of position.

Boggess made 18 saves in the game.

The game was back-and-forth in the first half with the fourth-seeded Lady Gators tying the game at two late in the half when Alliyah Penick arched a rainbow kick over Clarion goalkeeper Chesney Boggess’ hands.

The Lady Gators scored early in the first half when Evin Stauffer took a long shot that soared over Boggess’ outstretched hands.

Clarion, the fifth seed, tied the game five minutes later when co-captain Evelyn Lerch chased a ball into the right corner before crossing the ball in front of the goalmouth to Lexi Coull, who scored.

Lexi Coull takes a corner kick. Coull scored a goal Monday and set up another with a corner. Photo by Maria Wilson

The Lady Cats then took a 2-1 lead when Ruby Smith’s long out-of-bounds throw went over four Port Allegany defenders to Leadbetter, who scored the first of her three goals.

Clarion will travel to top-seeded Brockway to face the Lady Rovers at 5 p.m. Thursday, Oct. 28, at Varischetti Field.

Abbi Frederick heads a ball during the first half of Clarion’s win at Port Allegany Monday. Photo by Maria Wilson

Oct. 25, 2021 VB: Clearfield Top Curwensville; Smethport, Galeton Win
Oct. 26, 2021 D9/10 Volleyball/Soccer Playoff Schedule
This website or its third-party tools process personal data.In case of sale of your personal information, you may opt out by using the link Do not sell my personal information.
×
Manage consent