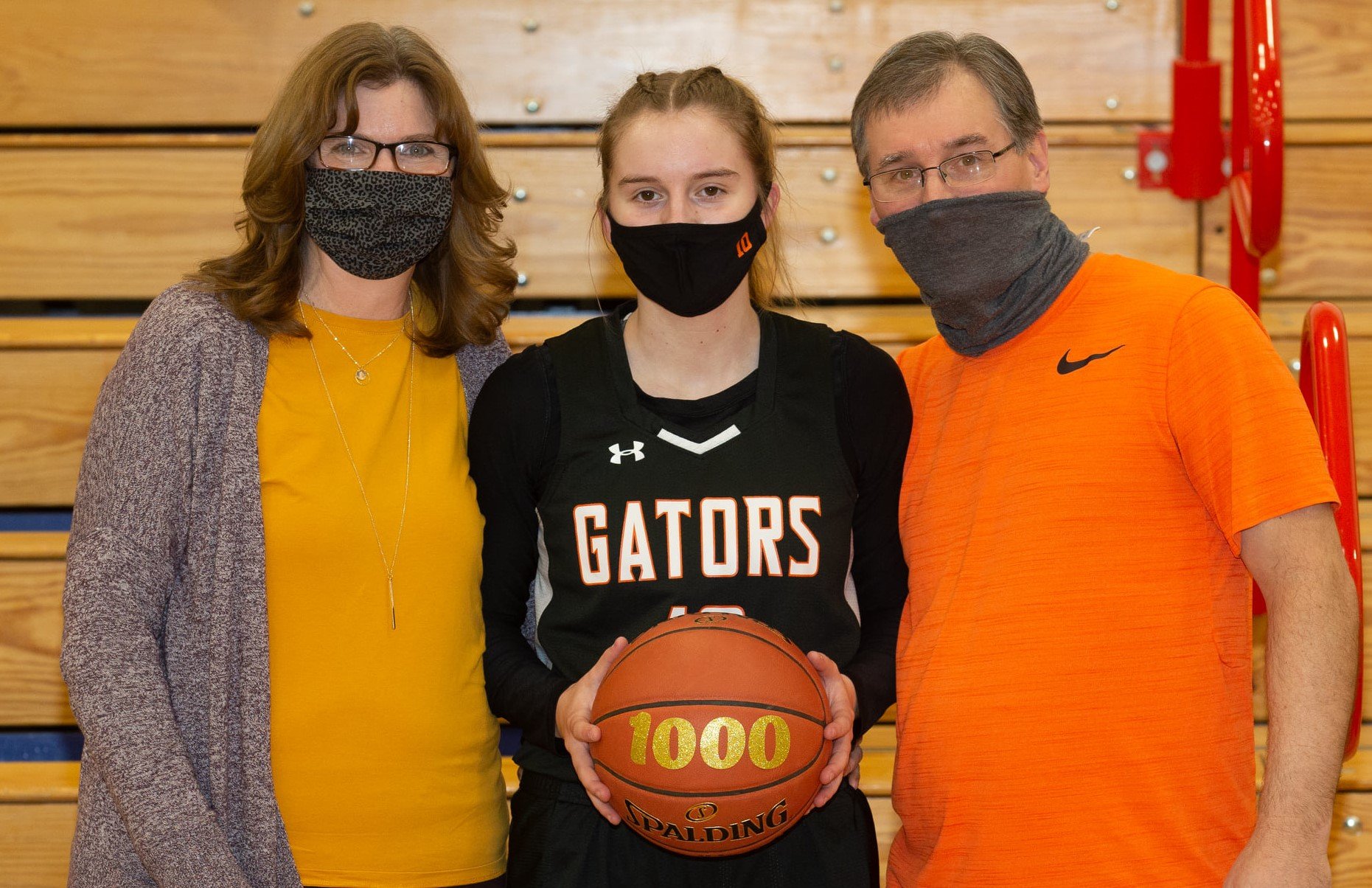 Garzel with her parents after scoring her 1,000th point. Photo by Patrick Crants. See more of Crants work here.

KANE, Pa. – Bree Garzel had an afternoon to remember for Port Allegany in a 56-47 win at Kane.

Garzel became the latest member of the 1,000-point club for the Lady Gators, and she did it in style.

The senior, who just a week ago set her career-high with a 40-point game against Bradford, bettered that by scoring 41 in the win over Kane. Her 12th point of the game, a floater from the left side, pushed her over the 1,000-point mark.

Those last “couple” of games have been incredible for Garzel, who added nine rebounds Saturday.

Starting with the 40-point game against Bradford Saturday, she has tossed in 123 points in her last four contests – and amazingly that included a five-point game against Otto-Eldred in which Garzel gave the Lady Terrors all the credit for stopping her.

“For sure, 100 percent,” Garzel said when asked if she believed she was in a zone right now. “It’s my mentality right now. I’ve been confident. I walk out there like I know I can score that many. Some games you have those games you walk out there and you aren’t feeling it. Since these past few games, it has definitely boosted my confidence, a lot, for sure.”

Garzel scored in a variety of ways Saturday hitting four 2-pointers and four 3-pointers. But, amazingly, she got to the free-throw line 30 times, making 21 of them, for over half her points.

“I worked really hard on my free-throw shot this summer,” Garzel said. “Getting to the line was a big advocate for my points in games. Other than the 3-point shot, driving and getting fouled is what I would look for. Going into that game (Saturday), (I knew) they (were) going to play me tight on the 3-point line. I am a 3-point shooter. The only other way is going to be getting to the foul line.”

Garzel, who is believed to be the first District 9 player to score 40 or more points twice in a season since Kayla Ho’ohuli did so for St. Marys in 2010, scored 11 points in the third quarter alone while hitting a pair of 3-pointers in that quarter. That played a key role in the victory, as it allowed Port Allegany to go from five up, 25-20, at halftime, to 19 ahead, 42-23, going to the fourth quarter.

“I definitely think my team, all of them, have stepped up to the plate for sure,” Garzel, who is averaging 23.2 points per game, said. “Coming into the season, it was looking a little rough, obviously, losing Cailey Barnett (who scored 1,312 career points in a career that ended last season). But, our team has definitely come together as one. We play as a team. We do things as a team. My team is phenomenal. I wouldn’t ask for anyone else. I think we are starting to zero in on playoffs a little more. We are started to prepare. We are starting to do drills for playoffs. I wouldn’t trade my team for the world.”

Sarri Swanson scored 20 points for Kane, including 14 in the fourth quarter when she was 6 of 7 from the free-throw line. Audri Marconi chipped in 12 points, and Rainee Wright hit three 3-pointers and scored 11 tallies.