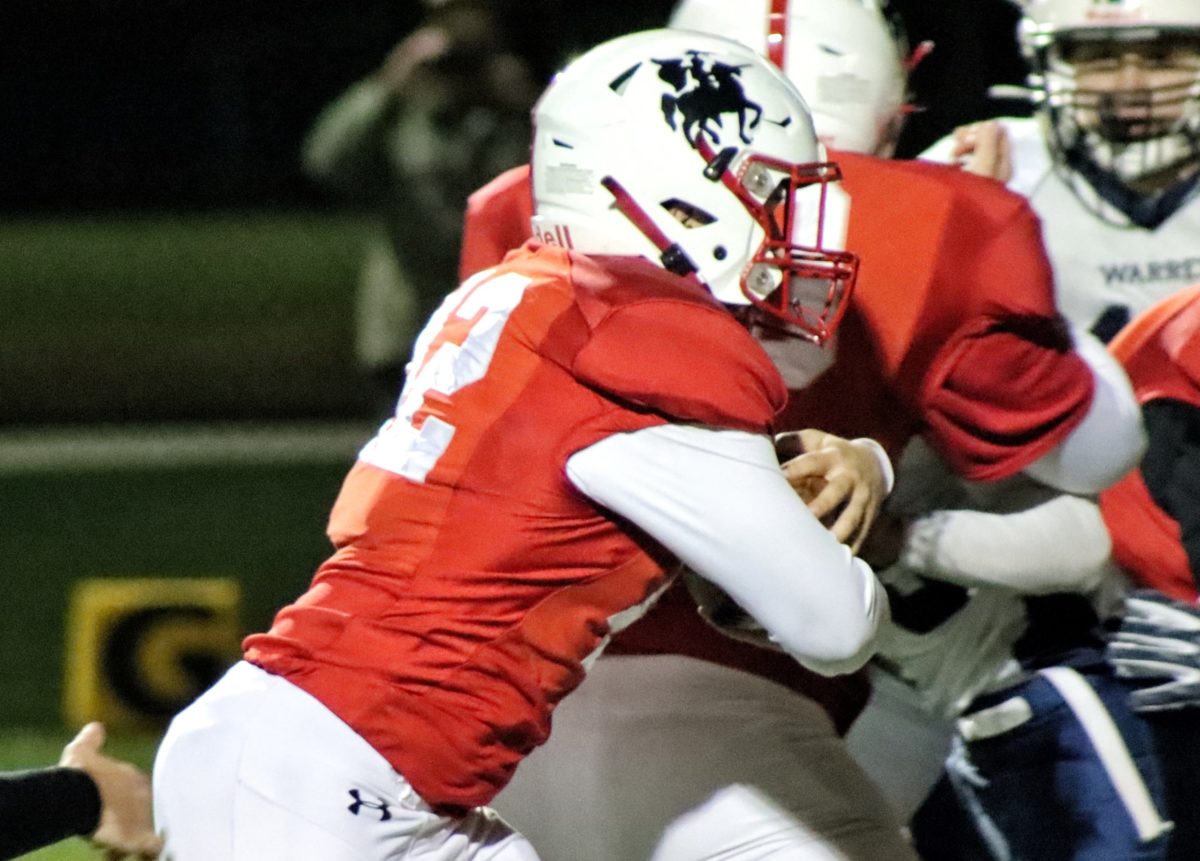 General McLane's Nate Danowski scored the go-ahead touchdown in the fourth quarter of the Lancers' 28-20 win over Warren. Photo by Cody Elms.

TITUSVILLE, Pa. – General McLane rallied from an 18-6 deficit early in the fourth quarter to beat Warren, 28-20 in the District 10 Class 4A semifinals Saturday at Carter Field.

It was a shocking turn of events, as Ethan Senz scored on a 1-yard touchdown run to give Warren an 18-6 lead with 11:17 remaining in the game. It was Warren’s initial drive of the second half and chewed up seven minutes of game clock.

Ethan Senz on 4th and goal punches it in for the Dragons. Warren 18, General McLane 6, 11:17 4Q pic.twitter.com/yoacTnspIp

GM responded by scoring 22 points over the next eight minutes, including the go-ahead score from Nate Danowski, a 3-yard run with 6:10 to go.

“We were just fired up the whole time, we didn’t want to lose,” Danowski said. “We did not want to go home. We just kept playing. That was the whole message.”

The rally all started with John Amon, who was banged up throughout the course of the game but battled his way through.

After Senz’s touchdown run, Amon took the ensuing kickoff back to the Warren 30. It was a theme for GM (6-3), which was very opportunistic all night. Two plays later, Amon found Magnus Lloyd on a screen pass, and Lloyd carried Dragon defenders into the end zone for a 20-yard score that got the Lancers back within five at 18-13.

After the two teams traded defensive stops, Warren (5-5) was forced to punt from its own 39, still leading with just over seven minutes to go. The snap on the punt went sailing high, giving GM prime scoring opportunity at the Warren 12.

That’s when Danowski crossed the goal line on his go-ahead score.

A sack of Warren quarterback Eric Dippold forced Warren into a third-and-19 situation on their next drive with just over four minutes to play. Dippold stepped up in the pocket and delivered a strike to Ben White for 18 yards, setting up a 4th-and-1.

The Lancer defense stood tall, denying the Dragons at their own 44-yard line. The very next play saw Danowski break free for 43 yards down to the 1 and he punched it on the next play to seemingly put the game out of reach.

Warren did have a chance in the waning moments, however.

Warren got the ball back at its own 48, and Dippold delivered a strike to White down to the 16 with seven seconds left.

The Dragons put the ball in the hands of White again on the game’s final play, but Amon and company forced him out of bounds at the 7 as time expired to end the game.

It was the second win for GM over Warren this season to go along with a 34-31 victory in the regular season.

General McLane took advantage of a Warren turnover right from the get-go, as Eric Salamonsen intercepted Dippold at the 1-yard line on the third play from scrimmage of the game. Amon called his own number and it was quickly 7-0 Lancers.

GM takes advantage of an INT deep in Warren territory as John Amon takes it in from 1 yard out. GM 6, Warren 0, 10:41 1Q pic.twitter.com/j0KeD5p3Zn

It didn’t take long for the momentum to shift, however, as Dippold found White for a 15-yard touchdown late in the first quarter.

After Warren forced a GM punt, the Dragons went back to work, needing just two plays to score. Senz burst through for a 43-yard gain and Tommy Nyquist raced 30 yards for a score on the next play to make it 12-6 Dragons, a score that held until early in the fourth quarter.

It was part of a big game for Nyquist, who had 123 yards rushing and 40 more receiving. He was forced to exit the game in the second half due to injury, however.

Danowski led GM on the ground with 88 yards.

With the win, the Lancers advance to play Meadville for the D10 championship. The two teams met back on Sept. 3, a 47-7 win for Meadville.

“We just have to make less errors,” Danowski said. “We have to focus all week to fix those errors.”

EDINBORO, Pa. – Locked in a tight battle with upset-minded Harbor Creek, Meadville used explosive plays in the second half to pull away from the Huskies, 44-10.

The second of three touchdown runs from Khalon Simmons on the night, a 20-yarder, gave Meadville a 20-10 lead with 1:36 to go in the third quarter.

That was the only score until late in the fourth quarter, when Meadville proceed to score 24 points over the final 4:04.

It all began with a goal-line stand, with the Bulldogs thwarting the Huskies on the 1-yard line.

Simmons got the ball in his hands on the next offensive play and did the rest, racing the length of the field, 99 yards for a touchdown to make it 28-10.

Forced to throw the ball to try and get back in the game, Meadville collected a pair of pick six’s in the game’s closing minutes, a 33-yarder from Brighton Anderson and another from Hunter Graham.

Griffin Buzzell got the scoring going for Meadville on a 38-yard touchdown run in the first quarter.

Harbor Creek responded with a 30-yard touchdown pass from Heath Betza to Matt Cassidy to tie the game at 7-7 with 4:29 to go in the second quarter.

Simmons gave Meadville the lead just before the half on a 26-yard run.

The Bulldogs will enter next week’s championship game against General McLane in search of their first D10 crown since 2016.

Grove City, Hickory Advance to D10 Class 3A Football Semifinals
District 10 Updates 2021 Football Playoff Brackets
This website or its third-party tools process personal data.In case of sale of your personal information, you may opt out by using the link Do not sell my personal information.
×
Manage consent