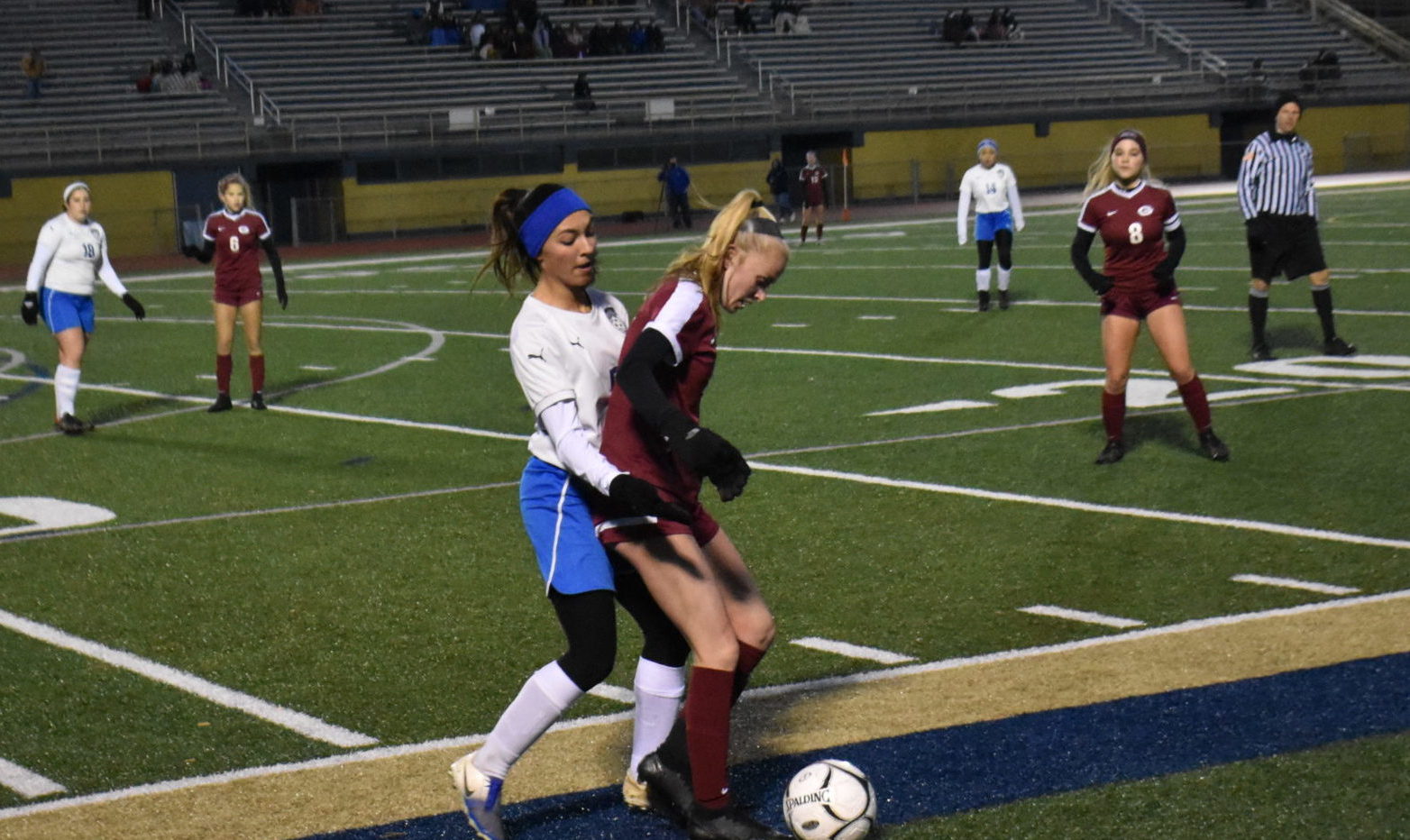 NORTH HUNTINGDON, Pa. – On paper it was a ‘David vs. Goliath’ matchup, but District 10 champion Cambridge Springs wasn’t going to go down without a fight in the PIAA Class 1A semifinals against Greensburg Central Catholic on Tuesday.

Keeper Maddie Yanc was brilliant, but GCC’s Sara Felder scored three goals and Sam Felder two to lead the Centurions to a 7-0 win.

Three of those goals came in the final four minutes.

“It was what, four goals in the last five minutes or something like that? They wore us down pretty good at that point,” said Cambridge Springs coach Geoff Bristow. “The thing is, they have a program that they are in a position that they can assemble a team of academy players and prospects. We’re a small, rural school and we work with what we’ve got. This is an incredible achievement for this team. To be able to win a District title, get to the semifinal round, I’m so proud of these kids.”

Nola Zook throws it in for Cambridge Springs

The Blue Devils (15-5-1) were also dealing with additional adversity, given that they had several players out due to a COVID-19 quarantine situation.

“Unfortunately, some of our better players had to stay behind due to a COVID quarantine,” Bristow said. “That affected the personnel we had on the field and the positions they were in. Regardless, we were playing against a team with superior skill. But I’m proud of the fight our girls had here today.”

Sara Felder, a sophomore, got GCC (18-0) on the board just under four minutes into the game. It was one of the few misplays Yanc had all game.

Cambridge Springs attempted to pack their defense in against the powerful GCC attack, and it worked for long stretches, but GCC found cracks at key times.

Almost midway through the first half, Sam Felder got her first of the game to make it 2-0 at 20:20.

That score stood until the half, thanks to the brilliant play of Yanc, who unofficially had 16 saves.

“Maddie is just an incredible goalkeeper,” Bristow said. “She’s got great hands, great timing. There were a couple there that I thought for sure were going in, and she got up there to that corner and saved shots that I didn’t think a high school girls soccer player would be able to get to. That was awesome.”

Cambridge Springs couldn’t get anything going offensively against a vaunted GCC (18-0) defense, failing to register a shot on goal.

The onslaught in the final four minutes came courtesy of Sara Felder, who had two, and Bethany Winnor.

With the win, GCC will play Southern Columbia, a 9-0 winner over Conwell-Egan in the other semifinal, in the state championship game on Friday at 11 a.m. at Hersheypark Stadium.

For Cambridge Springs, Ella Nicholson is the lone senior who will be graduating. Expectations will be high again for a team that just two years ago had a last place finish in their region.

“Almost the entire team is back next year,” Bristow said. “It’s not just exciting, it’s satisfying. That makes me feel good, playing against these teams with all these seniors and for the most part beating them.”