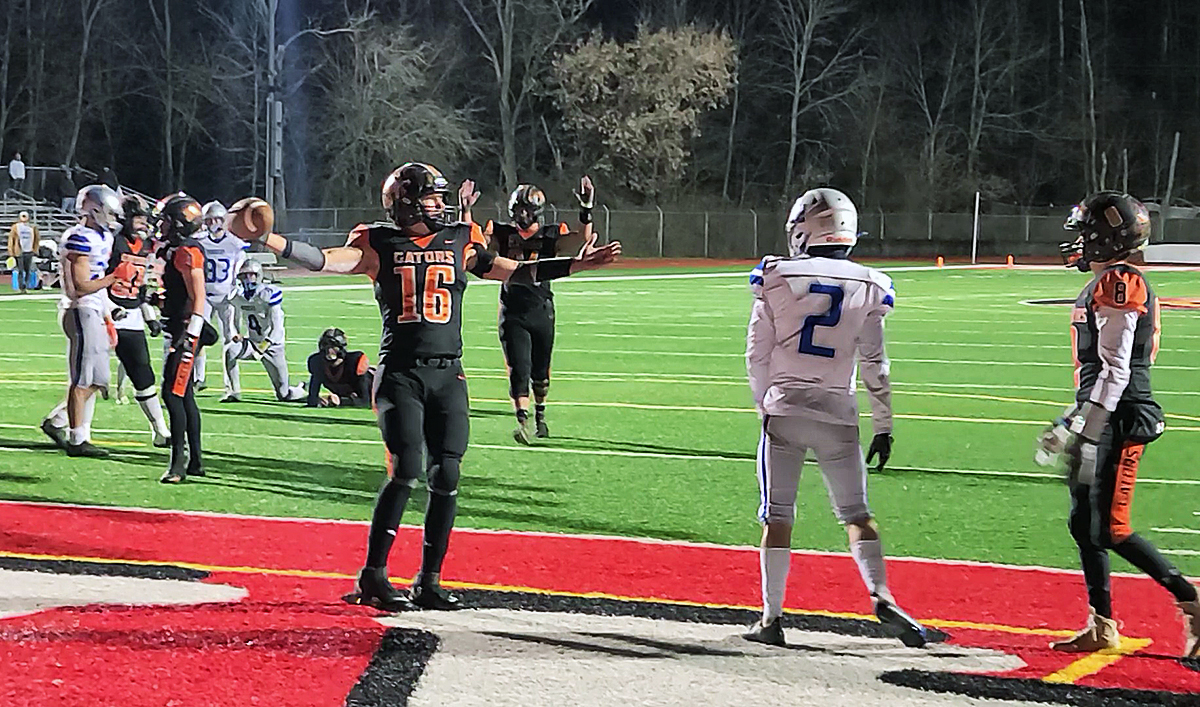 Blaine Moses celebrates after scoring his third touchdown of the game. Photo by Brian Hagberg.

BRADFORD, Pa. – Blaine Moses and Drew Evens each accounted for three touchdowns, and the Gators’ defense bottled up the Raiders as Port Allegany rolled to a 42-8 win over Reynolds in their PIAA Class 1A quarterfinal Friday in Bradford.

Moses had a pair of rushing touchdowns, including the first and last score of the game, and caught another, while Evens threw for two TDs and ran in a third. Noah Archer caught one touchdown pass and had a rushing score as well, and the Gators racked up 448 yards of total offense.

Meanwhile, the Gators’ defense held the high-powered Raiders’ offense to just 189 total yards and their lowest point total of the season.

“We talked about just controlling the line of scrimmage,” Port Allegany coach Justin Bienkowski said. “We talked about staying ahead of the chains. We don’t want to put our offense in precarious situations. And credit goes to our system coaches controlling the offense and defensive side of the ball. Our kids never got too high when they should have and they never got too low when they could have it just kept battling. They’ve really represented our school very well.

“We didn’t play a real good first half against Brockway and they gave us everything we could handle. We just talked about all week coming out of the locker room getting off the bus and getting a good start.”

The Gators (12-1) set the tone for the game on the opening possession. Port Allegany got the ball to start the game and marched 68 yards in just under four minutes to put the first points on the board. Moses finished the drive with a 2-yard run.

Blaine Moses with a 2-yd run puts @PAGatorFootball up 6-0 with 8:12 to play 1Q pic.twitter.com/BmBo5i8KyK

Reynolds (11-2) was poised to answer on its first possession as the Raiders took the ball down to the Gators’ 7. A holding penalty pushed the ball back to the 17 and Reynolds was unable to convert.

“We just kind of preach it all the time you know it’s bend, bend, bend don’t break see what they’re gonna try to take from us, and then we’ll react to it and we reacted downfield and we were able to get a stop at the end there,” Archer said.

See the full postgame interview with Moses and Archer:

Moses hauls in this 17-yd strike from Drew Evens, Noah Archer runs in the conversion and Port leads Reynolds 14 – 0 with 9:55 2Q pic.twitter.com/TdxjOcl6vK

The Gators took a 3-score lead when Evens took the ball off right tackle on a quarterback keeper for 15 yards. Moses ran in the conversion on a direct snap play and Port Allegany had a 22-0 lead with 2:55 to play in the half.

Port’s defense came up with two big sacks on Brayden McCloskey to end the half and keep it a 3-score game heading to halftime.

Port Allegany got the ball near midfield after Reynolds turned it over on downs to start the second half. Three plays later, Archer caught a pass in the flat, slipped through Tino Gentile’s tackle attempt, and tiptoed down the sideline for a 45-yard touchdown to put the Gators up 28-0.

On the first play from scrimmage during the ensuing possession, Jalen Wagner had trouble with the handoff and Port Allegany dove on the ball for the lone turnover of the game.

“I think that sealed it,” Moses said. “That really took the wind out of their sails.”

After a long run, aided by a personal foul penalty, Archer ran it in from six yards out. Jarrod Funk kicked the extra point to make it 35-0 and put the running clock in effect with 6:30 to play in the third quarter.

Archer from 6 yards. The PAT makes it 35-0 @PAGatorFootball over Reynolds. Running clock with 6:30 to play 3Q pic.twitter.com/dETgdtF174

Reynolds answered with its most effective drive of the night. Wagner’s running coupled with quick completions by McCloskey had the Raiders inside the red zone for the first time since their first possession.

McCloskey connected with Haydin McLaughlin over the middle, and McLaughlin spun away from a pair of Gators defenders before sprinting 16 yards to the end zone for the Raiders’ lone score of the game.

McCloskey to McLaughlin for 16 years and the Raiders are on the board. Port Allegany leads 35-8, 3:12 3Q pic.twitter.com/G0KzpgjHzE

Moses closed out the scoring with a 10-yard run midway through the fourth quarter.

Wagner, who had run for more than 2,700 yards and 37 touchdowns coming into the game, was held to 116 yards on 22 carries. McCloskey was 8-21 for 77 yards and a touchdown. McLaughlin had four catches for 44 yards and a score, and Andrew McCloskey had three grabs for 35 yards.

The Gators advanced to the PIAA semifinals for the first time since 2012. They will face Union (New Castle), a 26-0 winner over Bishop Canevin, at a date, time, and location to be determined with the winner to play for the Class 1A state championship.

Bienkowski said Port Allegany “will enjoy” the quarterfinal win for a couple of days before getting back to work next week.

“We’re gonna enjoy being one of the Final Four teams left in a state until Monday,” Bienkowski said. “Coaches will get together over the weekend we’ll put together a plan. We get seven more days with a bunch of kids that are so incredibly giving themselves. They’ve all given of themselves all year long for the betterment of our team, and I think you can see that on the field.”

Hoenstine too Much for Grove City, as Central-Martinsburg Ends Eagles’ Season
Westinghouse Stifles Farrell in Class 2A Quarterfinals
This website or its third-party tools process personal data.In case of sale of your personal information, you may opt out by using the link Do not sell my personal information.
×
Manage consent