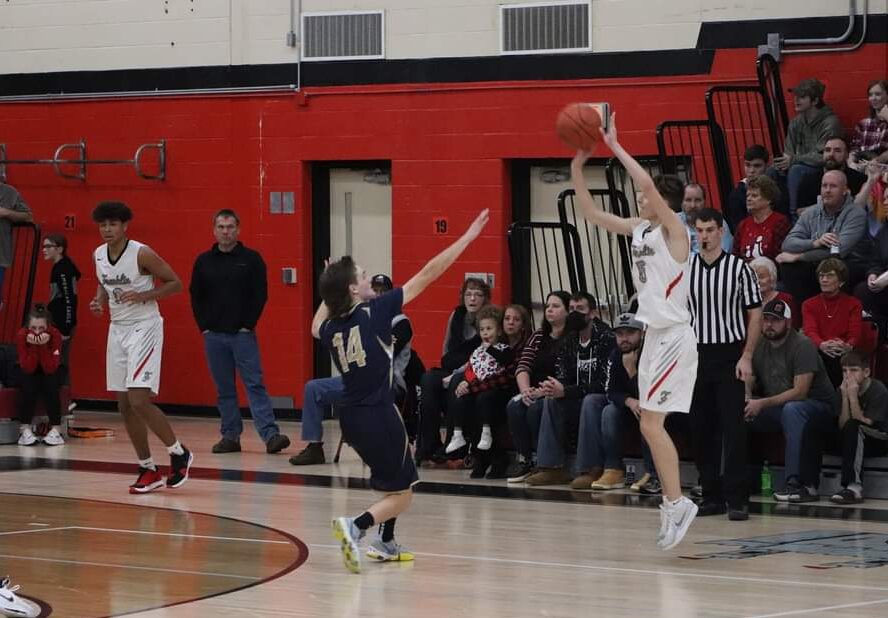 The top-seeded Knights asserted themselves early, leading by 11 after the first quarter and scoring 31 points in the second to take a 48-8 halftime lead.

In addition to Fulmer’s 27, Luke Guth and Damon Curry scored 20 and 19 points, respectively.

The defending District 10 champion Knights will now turn their attention to the semifinal round, where they have a date with No. 5 seed Mercyhurst Prep on Tuesday (March 1).

MEADVILLE, Pa. – Trailing by as many as nine in the second half, No. 3 seed Girard rallied for a 50-43 win over upset-minded Greenville.

Dylan McDonald scored six of his team-high 16 points in the fourth quarter and chatted postgame about, among other things, the Yellow Jackets’ terrific second-half defense.

Girard led 46-40 until a Jalen Ritzert 3-point play with 34.8 seconds to go. Alex Henry came down and made 1-of-2 from the free-throw line for Girard, Greenville turned the ball over on the ensuing possession, and Henry came back and knocked down a pair of free throws with 22.2 seconds to go to seal the deal.

“Greenville is a really good team and we knew coming in it was going to be a four-quarter game,” said Girard coach Mark Schrier. “They got hot, they were 11-of-21 in the first half and it seemed like everything they shot was going in.”

Ritzert was brilliant in defeat for the Trojans, scoring a game-high 23 points and making a number of contested shots.

Nate Styuvesant scored all seven of his points in the first quarter to help the Trojans get off to a strong start.

It was 27-22 Greenville at the break, with Ritzert hitting a triple at the buzzer.

“The kids showed resilience,” Schrier said. “Defensively down the stretch we did a nice job I thought. It was another one of those games where it was just the toughness of the group and the perseverance to battle through it. I’m really proud of my guys.”

Geremia Dell’omo scored 11 of his 12 points in the third quarter for Girard, while JJ Lehman also finished with 12 for the Yellow Jackets.

It was the third win this season for the Bobcats over the Wildcats.

Seneca went on an 18-7 run in the second quarter to take a 29-16 halftime advantage.

Jacob Young finished with 17 points and logan Kibber 14 for the Bobcats.

Seneca overcame a big night from Northwestern’s Eric Steinle, who poured in a game-high 28 points.

The Bobcats move on to face No. 3 seed Girard in the semifinals.

Dewey Byrd led a balanced effort for the Lakers with 14 points, while Trey Battle and Aronde Brigett netted 12 each.

Ryan Mayes poured in a game-high 20 points for North East, while Noah Crozier and Owen Kemp added 11 each.

Mercyhurst Prep moves on to face top-seed Franklin in the semifinals.

D10 Class 2A Boys Quarterfinals: Cambridge Springs, Rocky Grove, Kennedy Catholic, West Middlesex Advance
Big Guns Set to Take the Mat at District 9 2A Wrestling Championships
This website or its third-party tools process personal data.In case of sale of your personal information, you may opt out by using the link Do not sell my personal information.
×
Manage consent