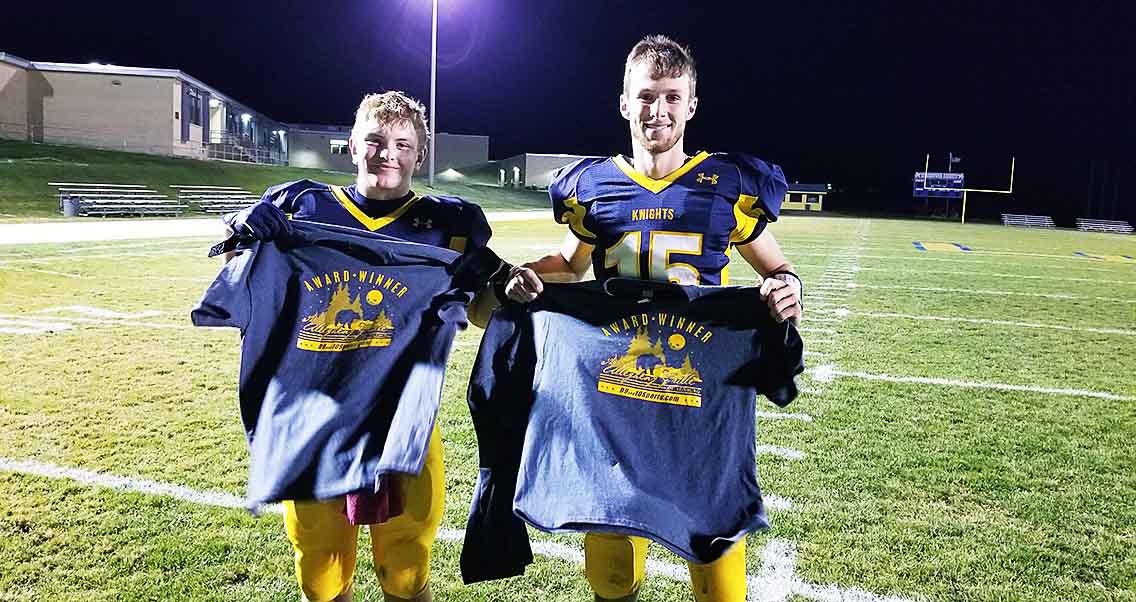 COCHRANTON, Pa. – Eisenhower found itself trailing for the first time all season on Friday against Cochranton, but it turned out to be short-lived.

Cael Black rushed for 169 yards and three touchdowns as the Knights put the finishing touches on an unbeaten 7-0 regular season with a 31-8 victory.

Cochranton struck early courtesy of a big play, an 88-yard touchdown pass from Wyatt Barzak to Kendrick Hostetler that, coupled with the 2-point conversion, made it 8-0 Cardinals.

The Knights took control in the second quarter, however, scoring three-straight touchdowns to take a 21-8 halftime lead.

Black scored on runs of 21 and 1, while quarterback Owen Trumbull called his own number from a yard out.

Black’s third touchdown run of the game, a 3-yarder, made it 28-8 in the third quarter, and kicker Jake Venman, who was perfect on extra points, booted a 24-yard field goal in the fourth.

Benji Bauer also had a big game on the ground for the Knights, rushing for 100 yards, while Dillon Benson had 100 yards receiving. Trumbull threw for 123 yards on 9-of-16 passing.

Barzak finished with 137 yards passing and Hostetler 132 receiving for Cochranton (0-7).

The Knights host West Middlesex next Friday in the District 10 Class 1A semifinals.

STONEBORO, Pa. – Gavin Murdock had a monster game as Lakeview cruised to a 47-7 win over Mercer.

The Sailors (3-4) scored twice in the first six minutes of the game, courtesy of an 8-yard run from Calogano Wilkins and a 70-yard scamper from Murdock.

They extended their lead to 27-0 in the second quarter when Lane Barber pounced on a fumble in the end zone, followed by a Murdock 7-yard pass to Kendall Crocker.

Murdock threw his second touchdown pass of the game in the third quarter, a 25-yarder to Hunter Miller to make it 34-0.

Aidan Bright got Mercer on the board less than a minute later on a 68-yard run.

Murdock capped his brilliant night with an 11-yard touchdown run in the closing moments of the third.

WATTSBURG, Pa. – In a game that was called at halftime, Jared Gennuso scored a pair of rushing touchdowns and also had an 85-yard kickoff return for a score to open the game as Fairview blanked Seneca.

The Tigers’ (4-3) Jeremy Frazao also blocked a punt for a touchdown and had an 18-yard scoring run, and Tyler Corbin also scored on a 44-yard run.

Corbin led the Tigers with 61 yards on the ground.

BUTLER, Pa. – Butler earned its second win of the season, scoring all 28 of its points in the first half to knock off Slippery Rock.

The Rockets fumbled the opening kickoff, and the Golden Tornado’s Byron Manchester took advantage, punching it into the end zone from a yard out and a 7-0 lead.

Slippery Rock’s Alex Duffalo capped a Rockets first-quarter drive with a 23-yard field goal, but that was it for the offense.

That was followed by a pair of late scores in the quarter – a 31-yard run from Justin Kabay and a 29-yard pass from Cooper Baxter to Charlie Kreinbucher.