Franklin Falls in Slugfest to Bishop Guilfoyle in Class 3A Quarterfinals 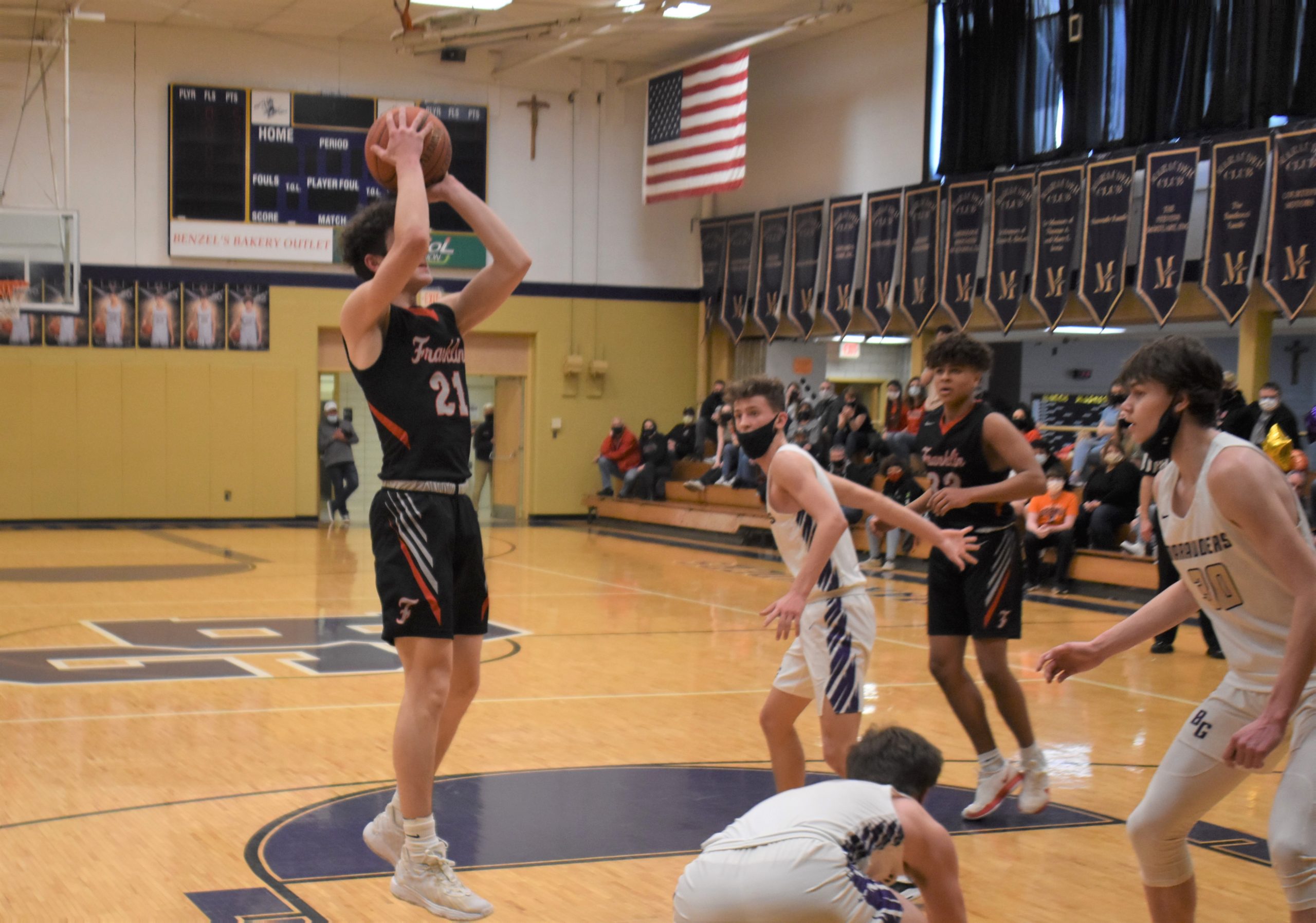 Franklin's Hayden Adams pulls up for a jumper during the first half of Saturday's PIAA Class 3A quarterfinal game against Bishop Guilfoyle. Photo by Andy Close.

ALTOONA, Pa. – District 10 champion Franklin had its sights set on a berth in the PIAA semifinals.

Bishop Guilfoyle had other ideas.

The Marauders used their size to their advantage, outlasting the Knights 53-45 in the Class 3A quarterfinals on Saturday at Bishop Guilfoyle High School.

“I thought that was a great high school basketball game,” said Bishop Guilfoyle coach Chris Drenning. “Franklin is very good and is very well-coached. They just present so many unique problems with their ability to shoot the ball deep. It extends your defense so much, even with our length, they make you extend. We wanted to make it tough on them.”

The Marauders, who were still alive in the Class 2A playoffs when the COVID-19 shutdown hit last season, used their size and length to their advantage, making life difficult for the Knights.

Nevertheless, Franklin knocked down 11 threes in the game, five of which came from freshman Damon Curry.

The game was played within a 3-5 point window for much of the contest, but once BG went up nine with a 9-0 run that began in the third quarter and started into the fourth quarter, it forced Franklin to scramble.

“I knew going in that we were going to have to shoot it pretty darn good because BG does such a great job being efficient,” said Franklin coach Jason Fulmer.

The Marauders feature a lineup that has 6-9 Michael Woolridge, 6-7 Cameron Khoza and 6-5 Alex Wood.

That size allowed them to get second-chance opportunities that they were able to take advantage of.

“The big guy (Woolridge) had his opportunities. I don’t know what he finished with, but there were some back-breaking putbacks where we got stops and he was there for a putback,” noted Fulmer. “Luke (Guth) battled his butt off. I’m asking Luke at 6-2 to guard a 6-9 guy. I know he didn’t score, but he worked his rear end off on the defensive end.”

Tied at 35 apiece, BG went on that 9-0 run that was ultimately halted by a drive to the bucket from Easton Fulmer with 5:33 to go.

That was as close as they got in the closing moments, however, as BG was able to close it out, setting up a date with Brookville in the semifinals on Tuesday.

“I thought our size inside was a factor,” Drenning said. “We felt like if we were patient enough we were going to get a shot we wanted. We didn’t take many bad shots.”

They also got to the free-throw line, going 9-for-16, with all but four of those coming in the fourth quarter. Franklin didn’t attempt a free throw.

“I talked all week long and was like ‘hey look,’ we aren’t going to able to get to the rim. We can’t go shoot and get blocked two and three times,” Fulmer said. “But maybe I pounded that message a little too hard. I felt like in the second half we needed to attack the rim and we weren’t getting there. I’ll take that one. That’s on me.”

The teams went blow-for-blow from the first quarter to early in the fourth.

Eighteen of Franklin’s 24 points in the first half came from beyond the arc, including 12 points from Fulmer and six each from Curry and Adams.

BG had three different players – Khoza, Patrick Haigh and Casey Smith knock down 3s in the opening quarter before going inside more in the second.

Fulmer, who picked up two fouls in the first half, re-entered the game and gave Franklin a 24-22 lead late in the second quarter, but Khoza answered with a 3 of his own to give the Marauders a 25-24 halftime advantage.

Franklin never led in the second half but did tie it at 35 after an Adams jumper.

Curry knocked down a pair of 3s in the fourth quarter to keep the Knights within striking distance.

“Hayden played great and Damon, he’s going to be special,” Fulmer said. “I’m excited to see about him and Luke down the road.”

It was the final game for Franklin seniors Hayden Adams, Cade Adams and Zak Smith.

“Three years ago, we were pretty much a hot mess,” Fulmer said. “And to go from that to District 10 champions is a credit to those guys. They put the time in.”

Karns City, Kennedy Catholic (Class 2A), Erie (Class 6A) Boys Bounced in PIAA Quarterfinals
Villa Girls Outlast Beaver in Overtime in Class 4A; Coudy Drops Heartbreaker to Bishop Guilfoyle in Class 1A
We use cookies on our website to give you the most relevant experience by remembering your preferences and repeat visits. By clicking “Accept All”, you consent to the use of ALL the cookies. However, you may visit "Cookie Settings" to provide a controlled consent.
Cookie SettingsAccept All
Manage consent