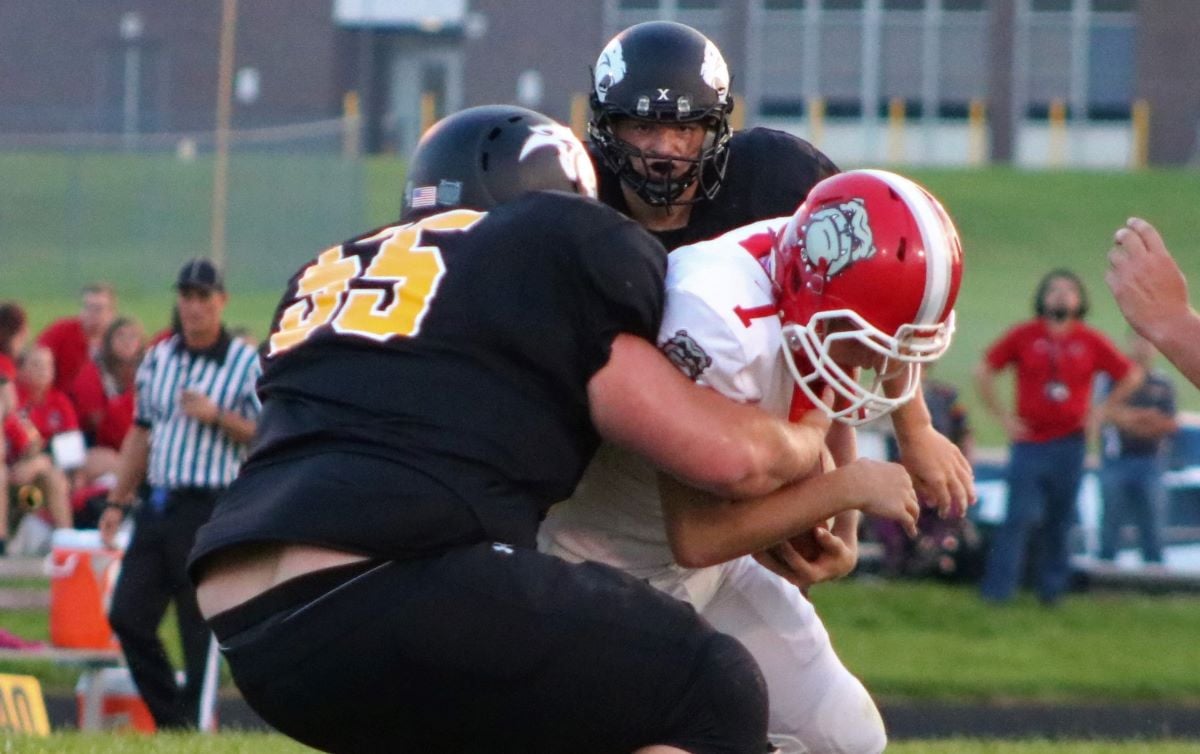 NEW BETHLEHEM, Pa. – In a season of so many highs, it didn’t start that way for the Redbank Valley football team, and that may have been a blessing in disguise.

Coming off the school’s first District 9 title since 1996, and with a wealth of returning starters, expectations were high for the Bulldogs entering the season opener at Keystone.

Redbank Valley was ranked fifth in the state and was expecting to roll a Panthers squad that wasn’t picked to finish in the top two of the D9 League Small School South on its way to an unbeaten regular season.

But sometimes things don’t go according to plan.

Keystone, despite not scoring an offensive touchdown, shocked the District 9 world with a 22-20 upset of Redbank Valley.

At that point, the Bulldogs season was at an early crossroads.

Redbank had used three quarterbacks in the game – and the old saying is if you have multiple quarterbacks you don’t have a quarterback (the Bulldogs quickly rectified that issue) – and had watched turnovers and special teams breakdowns cost them their shot at an unbeaten season before it really started.

But, according to head coach Blane Gold, his seniors didn’t let the Keystone loss become the defining moment of the season, at least not in a negative way.

Instead, they took that loss and used it as a rallying cry for what has become a historic season for the Bulldogs, one that has them playing in the school’s first-ever PIAA semifinal game of any kind – Redbank Valley meets WPIAL champion Bishop Canevin at 7 p.m. Friday, Dec. 3, at North Hills’ Martorelli Stadium.

That loss became so much of a rallying cry, that the Bulldogs broke every end of practice huddle with the simple word “Keystone” to remind them of what could happen if they weren’t prepared to play every minute of every game.

“That is 100 percent the seniors,” Gold said. “I don’t like to panic or have players have player-only meetings, but that loss was such a unique situation. We had dropped that game, and it was the first time in a long time we had lost to Keystone. The players held a players-only meeting for an hour that Monday and then came out and said they were good. At practice, I say something and then leave the huddle to them. I look back, and they are breaking down ‘Keystone’ on three. That was going to be their motivating force to get better and just a reminder that on any given night anyone can beat us, so we were always prepared.”

Gold said without the seniors taking that leadership role, the run this season would never have happened.

“I can preach to those guys until I am blue in the face,” Gold said. “But those guys had to show up at school that Monday and face questions like ‘I thought you were going to be good and make a long run in states, what happened?’ They had to turn it up in practice and make sure it didn’t happen again.”

As the season wore on, the Keystone rallying cry took a life of its own to the point that after the Panthers won the D9 League Small School South title by virtue of their opening-game win over Redbank Valley, Gold got a Keystone championship t-shirt made and wore it at practice every day for the three weeks of the District 9 playoffs to remind his players that they hadn’t won anything yet.

“I wore Keystone’s conference champion shirt every day in practice for our District 9 playoff run,” Gold said. “It was every day for three weeks. I wore it to remind this special group of kids that if we didn’t win districts we would have left the season empty-handed. The kids did a good job of remembering that game, and we as coaches reminded them that they needed to prepare the best they could for every single opponent they played.”

Gold believes the loss to Keystone has played dividends in the postseason run for Redbank Valley.

“If we don’t lose that game, we may not have pulled out the Port Allegany game in the District 9 semifinals or the Union game in the District championship or last week against Northern Bedford,” Gold said. “Outside of the Keystone game, the only game that we played before the playoffs that was competitive down to the wire was the Smethport game. The Keystone game humbled us and taught us that anyone could beat us on any given night. Against Port Allegany, we were down two scores for the first time this year. Against Union, it was the first time we had to go on a legitimate drive in the fourth quarter to win, and last week it was the first time we were losing at halftime since the Keystone game. We talked about that at halftime (against Northern Bedford). We told them this was a chance to learn from the experience against Keystone and that we needed to come out and not panic and stay composed and win the football game.”

Gold is still using the Keystone game as a talking point during preparation for the Bishop Canevin game but in a different way.

“When we watch this team on film, this is a very athletic team,” Gold said. “We don’t have the edge with athleticism for the first time this year. We have talked about that first game against Keystone and how you look at it and we made mistakes, and Keystone capitalized on all of our mistakes.

Family Affair: Motivated Farrell Football Team Built on Community, Togetherness
BREAKING: Redbank Valley Headed to State Championship
We use cookies on our website to give you the most relevant experience by remembering your preferences and repeat visits. By clicking “Accept All”, you consent to the use of ALL the cookies. However, you may visit "Cookie Settings" to provide a controlled consent.
Cookie SettingsAccept All
Manage consent