For 900-Game Winner Straub it’s More About the Process, Preparation than the Wins 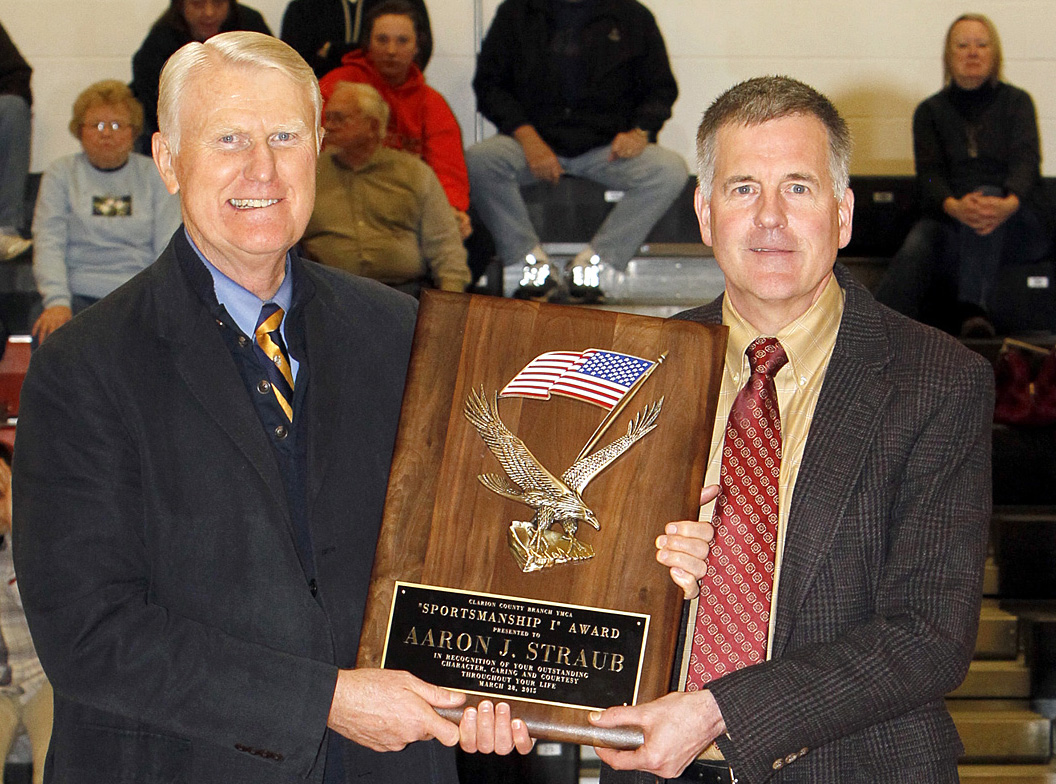 Aaron Straub (right) receiving the Sportsperson of the Year Award from the Clarion YMCA at the Sportsmanship I District 9 All-Star Basketball game in 2015. Norb Baschnagel, the game's director, presented the award

ST. MARYS, Pa. – Talk to anyone who has ever been affiliated with the Elk County Catholic basketball program, and they’ll tell you that the wins and losses aren’t the main focus.

That’s why, when head coach Aaron Straub won his 900th game as head coach on Jan. 16 against Otto-Eldred, there wasn’t a lot of fanfare.

“People that played for him or coached for him, like me, probably care about it more than he does,” said former player and longtime assistant Mike Buchheit.

“Prepared is one of the biggest words I would use,” said Buchheit. “I can’t imagine anyone out-preparing him. He puts in an enormous amount of time. He loves the game, he’s very disciplined and he doesn’t cut corners.”

And that success on the court comes second to the core values of the program and school as a whole.

“When you ask him what kind of year did you have, he says ‘I’ll let you know in 10 years,” Buchheit said. “You can’t evaluate it until they are grown up. That’s really, really important to Aaron. The most amount of gratitude is him seeing a former player doing well in life.”

Straub coaching a game this season. Photo by Bob Parana

LEAVING IT BETTER THAN YOU FOUND IT

One of the big things that Straub emphasizes to his players, is to leave something better than you found it. That goes for the program, but also in all aspects of life.

“Coach Straub always talks about this, and I would have said it even back in 2006 and 2007,” said Jesse Bosnik, a star player on the 2006 state championship team. “He instills that in life, it’s a life challenge. Are you going to be a giver or a taker? He always said the world is full of takers, but are you willing to be a giver? When you live your life like that, it’s a lot more fulfilling.”

It’s something Straub has instilled going all the way back to his first two years coaching girls basketball at ECC and the last 39 as boys’ coach.

“We harp on them a lot about that, and the program has been left in good shape by the players that have come before them,” Straub said. “The other thing is to give more than they take. We are in a society of takers and people that want to be handed things. We hope we develop a mentality of givers that allows us to continue to be a successful school system.”

The message has been received loud and clear, by players both past and present.

“That message goes for everything,” said 2017 graduate Nate DaCanal, the program’s most recent 1,000-point scorer. “Whether that’s cleaning up the locker room or whatever. That’s one of the things he’s big in, just teaching the little things. That could be in basketball or in the game of life.  One major thing I remember coach Straub always did, he’d send us little quotes before practice. That’s just a little thing in high school that you don’t always think about.”

From the day he started coaching for the Crusaders, behavior, discipline, and preparation have all been at the center of the program.

“Coach Straub was very fundamentals-based,” said Mike Close, who played on Straub’s first boys’ team. “He preached that you win with defense. You could make mistakes, but there were certain mistakes you couldn’t make. If you gave up the baseline, you sat on the bench.”

Years later, those little details, those fundamentals, and disciplined practices still stand out.

“Honestly, when it’s all said and done, it’s discipline,” said Kyle Mahoney about the first thing he thinks of about coach Straub.

Mahoney, like Bosnik, played a pivotal role in the Crusaders’ state championship team in 2006.

“That’s the take-home message,” Mahoney added. “Everything is about discipline and integrity. I feel like I’ve taken so much, everything to prepare me in life, everything I do in life, I think back to how well structured and organized we were. He might be the biggest role model I’ve ever had in my life.”

Straub coaches a playoff game at the old Tippin Gym at Clarion University. That floor was almost like a second home for the Crusaders.

“If we’re only in this for the x’s and o’s, we’re missing a great opportunity to impact the people that we coach,” Straub said. “Athletics is about developing the entire student-athlete, mind, body, and soul. The athletics event is the vehicle for how you can reach out to the student and interact with them on a daily basis. That’s a big part of what we hope that we’re able to accomplish.

“God and our faith have to be our top priority. I’ve been blessed to teach in a school all my career that has faith and Christ as the center of everything we do. Athletics is an easy extension.

“Our second priority is an extension of family. We’ve been blessed to have parents that are very supportive and positively involved. I’ve been blessed to experience the positive in our total athletic program that I have the pleasure of overseeing that as AD.

“Our third priority has to be school. Ultimately the games will end and your career will begin. What you do as a ninth, 10th, 11th, 12th grader in your subjects will keep doors open or close doors. Again, blessed to be teaching in our school where our faculty make themselves available and prepare them for the next step.

“And then finally, our focus basketball-wise. Again, blessed to be able to coach and teach in an environment where those kinds of things are the norm.”

In reality, that team wasn’t much different than any of the other great Crusader teams.

Perhaps just a little more talented, but with the same attributes that have become a staple of the program.

“The competitive spirit really helped us,” Bosnik said. “It wasn’t just the top five, six, seven guys. We had guys on the end of the bench, guys who weren’t going to get any time, but they battled in practice, scrapped, and clawed to make you better. From top to bottom it was really something special. I’ve never been a part of anything like that.”

That’s a special statement coming from Bosnik, who starred on the baseball diamond for three years at St. Bonaventure and then for three more years in the Los Angeles Dodgers organization before finishing his athletic career as a grad-student on the IUP basketball team.

For Mahoney, the closeness of the team is what stood out.

“I would just say the closeness and the friendships we had,” Mahoney said. “I don’t know how teams are today, but we were all such close friends. Outside of basketball, doing school work, most of us would gather at one house. That made it even more special, to see your friends every day on and off the court. And to win one (a state championship) for coach Straub, was extra special.”

In addition to being the basketball coach and AD at ECC, Straub is also the District 9 Chairman and Volleyball Chairman. Here he presents Shari Campbell with the 2020 D9 volleyball championship trophy at Kane High School. Both Straub and Campbell are state-championship winning coaches

IT TAKES A VILLAGE

One thing Straub credits for the success of the program is all of his coaches, from the youth level to his top assistants.

“Bottom line, in all the good things we try to do when you talk about success in the program, you have to take that back to the great job our coaches do at the younger levels,” noted Straub. “That starts with our kindergarten, first and second graders, our Little Dribblers, and our Cavaliers program. That was in place long before I got here. That has been a mainstay and constant in allowing us to achieve success.”

And he always listens.

One thing that might get lost in the drive, discipline, and focus of Straub’s teams is how much the man truly loves the game.

And, as he alluded to, those benefits go far beyond the basketball court.

It’s about faith and family.

“When Doug and AJ (his sons) bring the grandkids in, he would immediately switch to grandpa mode,” DaCanal said. “Once he was around his grandkids, the switch flipped.”

Mahoney and Bosnik recall how Mahoney would often do impressions of coach Straub and others.

Again, Straub would go from serious to smiling.

“One day Kyle yelled ‘go’ and guys started doing our pre-slide practice routine,” Bosnik recalled. “Coach is pretty serious, so to let Kyle do that was a sign of respect.”

Mahoney’s impressions still get laughs to this day.

“I still, to this day, will get some of my buddies, I think even coach Buchheit called me to get me to do some impressions,” Mahoney said. “I used to do some impersonations of him and some other players. A lot of people got some entertainment out of that.”

For Close, he recalls a sentimental moment several years ago.

He hadn’t heard from coach Straub in a while, so he was pleasantly surprised to receive a package from him in the mail.

“He wrote a letter to me and sent me my old uniform,” Close recalled. “They were getting rid of the old uniforms and raising money for new ones. That was special, to get that from him. He’s just so passionate about the game.”

The man truly remembers every player that comes through his program, from some of his first like Close to the more recent like DaCanal and others.

His success is truly remarkable, and he doesn’t show any signs of slowing down.

“Just day in, day out, playing for one of the greatest coaches ever, that’s what I’ll remember,” DaCanal said.

And he thinks he’ll be at it a while longer.

“I think he’ll coach until his grandkids get up there,” DaCanal said.”I think he loves what he does and you’re going to have to drag him off the floor”

Straub shouting out instructions during a playoff game. There have been plenty of those over the years.